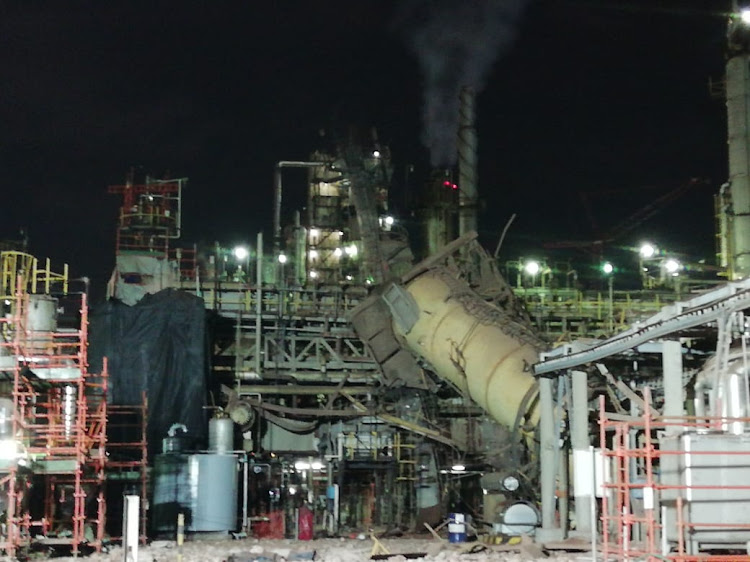 Two people were killed and six injured after an explosion at an oil refinery in Milnerton, Cape Town, in the early hours of Thursday.
Image: Twitter/@SAPoliceService

Two people — a man and a woman — were killed and six others injured after an explosion at the Astron oil refinery in Milnerton, Cape Town, in the early hours of Thursday.

The cause of the explosion is still the subject of an investigation, police said. Astron Energy South Africa said the incident occurred at its Milnerton refinery about 4am.

“The resultant fire has been contained and the plant is now stable,” the company said. “Our priority is to ensure the safety of all those on site and further information will be provided as soon as we have confirmed the details.”

“The City of Cape Town’s Fire and Rescue services responded immediately and were on the scene within minutes. The incident is reported to have been on the production side, not storage side.

“At this stage information is still coming in but there are no current concerns about pollution or increased risk for the community to be concerned about following from this incident,” he said in a statement.

Firefighters from the Cape Town fire and rescue department will remain on the scene until operations have been concluded, he added.

Residents commented on social media that they had been awoken by the explosion.

Elderly man dies in fire at old hospital in Mpumalanga

Twelve rooms at an old hospital where the elderly and unemployed people stayed were destroyed in a fire, resulting in one fatality, Mpumalanga police ...
News
1 year ago

Mini substation in Alexandra blows up, leading to electricity outage

A mini-substation blew up and caught fire in Alexandra on Tuesday due to overloading caused by illegal connections, City Power announced.
News
1 year ago

A Cape Town couple with three young children died in a shack fire on Sunday in Witsand near Atlantis. The fire destroyed 15 shacks leaving about 20 ...
News
1 year ago