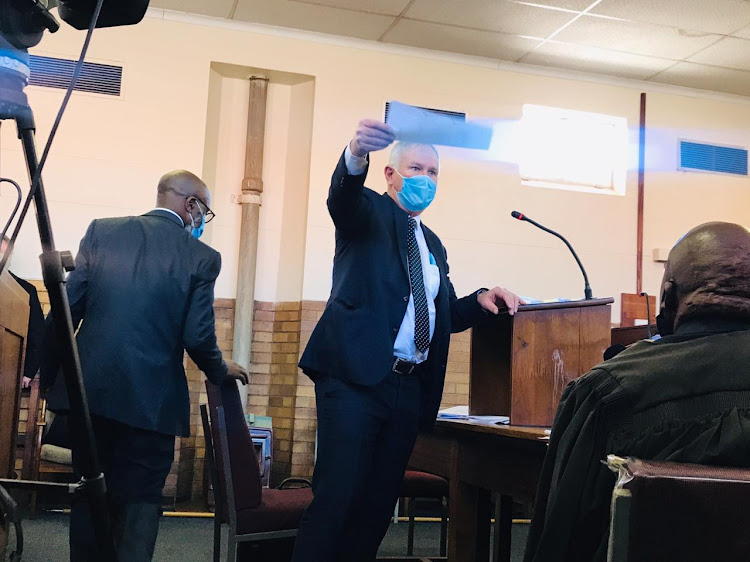 On Tuesday, advocates Barry Roux, who is representing 21 suspects, and Eric Bryer, representing two suspects, cross-examined the police officer who is investigating the recent fatal attack at a church in Zuurbekom.
Image: Kgaugelo Masweneng/TimesLIVE

The police officer investigating the fatal shooting at the International Pentecostal Holiness Church (IPHC) in Zuurbekom on the West Rand on Tuesday asked for bail to be denied to the suspects.

On July 11, five people were killed when a group of men attacked the church headquarters, allegedly as part of a fight for leadership by warring factions. Four men were shot and burnt to death in a car while a fifth man, a security guard, is believed to have been killed when he attempted to respond to the attack.

Police apprehended 43 suspects, among them a police officer, a soldier and a lawyer.

Maditse said due to several factors, all the accused should be remanded in custody.

“They must sit in jail until the matter goes to trial,” he said.

He submitted that the police had not yet identified who shot at whom at the scene.

“The accused did not achieve what they came to do. If they are out, they will come back and continue their mission. Some of them have previous cases against them,” said Maditse.

The other suspects are represented by advocate Chris Kgope and attorney Frans Mphatswe.

Accused number 43 is in hospital and does not yet have legal representation.

Clergyman Michael Sandlana - a central figure in the bloody succession battle at the International Pentecost Holiness Church - has laid claim to the ...
News
1 year ago