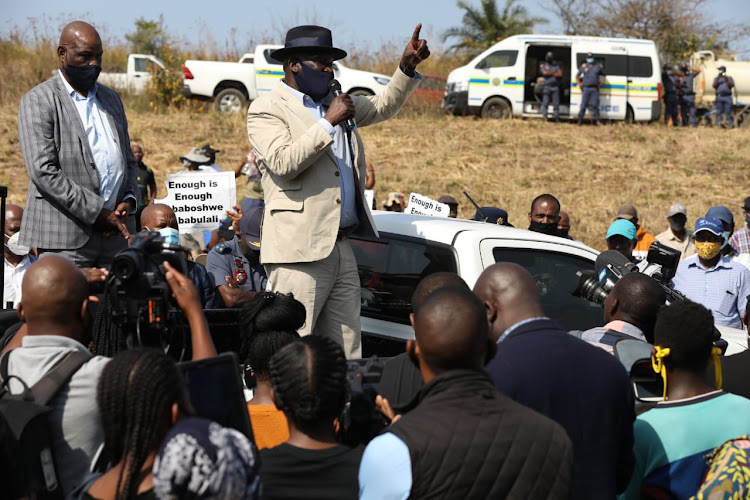 Police minister Bheki Cele has confirmed that the two men taken in for questioning in connection with the murders of five women on the KwaZulu-Natal south coast have been charged and are set to appear in court on Monday.

The minister was speaking during his visit to Mtwalume on Saturday where he addressed a crowd of about 100 people who had gathered where the latest of five bodies was discovered on Wednesday.

On Friday a police source close to the investigation told TimesLIVE that the two men were questioned after the fifth body of an unidentified woman in her 20s was discovered in a bush on a sugar cane farm in the area.

Two people have been questioned in connection with the discovery of five women's bodies in sugar cane fields on the KwaZulu-Natal south coast.
News
1 year ago

The discovery came after the body of Zama Chiliza, who disappeared on July 6, was found on Tuesday by women gathering wood.

The bodies of neighbours Akhona Gumede and Nosipho Gumede and that of Nelisiwe Dube were found in sugar cane fields in April and July respectively.

Cele said on Saturday: “We are glad to say we have picked up some people and we believe those people are the right people. They will be appearing in court on Monday and they are local people,” he said.

Despite several questions by the media, Cele would not divulge what charges the men faced and what evidence police had against them.

However, in a statement shortly after Cele's address, the provincial department of social development said the men, aged 35 and 40, were allegedly found in possession of SIM cards and cellphones belonging to the women.

“We believe this is a significant breakthrough in the case. We have consistently called on police to intensify investigations and we believe that is exactly what they did,” social development MEC Nonhlanhla Khoza said.

He also announced the opening of a 24-hour mobile police station in the area after complaints from the community that police at Hibberdene station were not doing enough to protect the community.

A concerned sugarcane farm owner on KwaZulu-Natal's south coast is offering a R20,000 reward to anyone with concrete information about the murders of ...
News
1 year ago

The semi-rural community of Mnafu in Mtwalume, on KwaZulu-Natal’s south coast, has again been left reeling after the decomposing body of a fourth ...
News
1 year ago