Hold up, gym bunnies — you might not be able to work out just yet 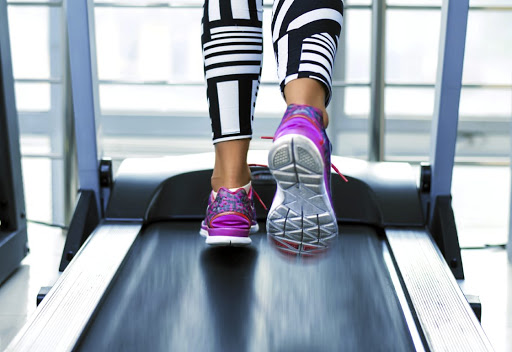 From Tuesday the treadmills shake off the dust and begin to run again at gyms across SA.
Image: 123RF

It's been four months of no gym, and even though South Africans have been permitted to hit the pavement, many a cough is now firmly — and perhaps permanently — indented.

Luckily, lockdown level 2 brings with it the opening of gyms. But this is not automatic: the opening needs approval from the powers that be first. Gym owners are required by law to present their Covid-19 plans to the government for approval before they are allowed to reopen.

So for those of us who believe that being part of the human race does not count as exercise, you'll have to hold onto your dumbbells a little bit longer.

Unless you belong to the smaller gym communities governed by Fit SA, the association of health and fitness clubs which has already applied for its members to open.

According to the latest Cogta gazette released on Monday, gyms will be open to the public subject to wearing a face mask, keeping social distance, and adhering to health protocols. No more than 50 people may be inside the gym at any given time.

Applications for the second wave of Covid-19 relief funding for athletes have opened and will close at the end on the final day of August‚ the sport‚ ...
Sport
1 year ago

Fit SA spokesperson Grant Austin said when the portal opened for fitness studios to apply for approval to reopen, the site crashed. After this, institutions were notified that governing associations could apply for all their members.

“We've done that already. Our members have a 40-page how-to manual which must be adhered to. That and the [gazette] released today means that our members will be opening tomorrow,” he said.

Virgin Active, the country’s largest health club group, said that it was ready to reopen its clubs as soon as it received the green light from government.

According to a Virgin Active spokesperson the club was engaged in talks with the government in early lockdown, making a submission on behalf of the broader fitness industry for gyms to reopen.

“While gyms and fitness centres have been given the green light to reopen, we are still waiting for approval from government on our Covid operational procedures and protocols, and what conditions will be imposed on our opening. We expect their review of our plan to take approximately a week, following which we will announce our opening date. We will not be opening tomorrow,” the company said.

The company has already reopened in Italy, the UK, Australia, Singapore, Thailand, Namibia and Botswana.

The 133 clubs in SA have not received membership fees since the start of lockdown on March 27.

Their new protocols include:

Those members who are not yet ready to come back to the club will still be able to freeze their accounts for no extra cost for another two months. They can also train from Virgin Active's digital platform at home.

According to Planet Fitness CEO and founder Manny Rivera, its teams met with the sports ministry on August 11 to discuss best practice and protocols. According to Rivera, the gym chain will be open from Wednesday.

Rivera said the gym had provided a number of submissions to the government during lockdown to be able to reopen its 47 venues.

When TimesLIVE first spoke to the CEO in June his concern was for smaller gyms, which he believed would most certainly have to close for good if the lockdown was not open soon.

“It’s atrocious the government would allow restaurants and casinos to open, but not us. It is just bizarre and unfair. What we offer is a protection against the virus by raising the immune system. The world is opening up its gyms, people flocking back, people need it. We are an essential service,” he said at the time.

Rivera said when it came to reopening, the company had followed requirements based on best practices recommended by the World Health Organisation and gyms around the world which had reopened. These included:

Andrew Rothschild, owner of the Sweat 1000 fitness chain, said they would be reopening on Tuesday when level 2 came into effect.

“The demand has been unbelievable and we have already had a lot of inquiries for bookings. I thought people would be scared to come back but that is not the case,” he said.

Rothschild said the lockdown forced them to go ahead with plans to create a fitness app, an idea they had been sitting on for months.

“It's cost a fortune, but we've made sure our gym is safe. We've fitted new vents into the aircons, filters have all been cleaned. We also have a new digital system so no papers or pens will be touched when visiting. Obviously there is sanitiser and floor markings denote where people can work to keep a safe distance.”

As exciting as the news is for some, the announcement however brings little comfort for the small fitness businesses which did not survive the lockdown.

Doctors say level 2 is right move, but appeal for respect of lockdown rules

President Cyril Ramaphosa’s announcement that SA will move to lockdown level 2 from midnight on Monday is welcomed as a step in the right direction ...
News
1 year ago

Virgin Active says “temporary layoffs” are on the cards for staff at its gyms, head office and contact centre
Business Times
1 year ago

WATCH | No towels, no saunas: A glimpse inside what the 'new normal' for gyms will be

Gyms had to close their doors at the same time as the rest of the country when lockdown level 5 was implemented in March. They are desperate for the ...
News
2 years ago