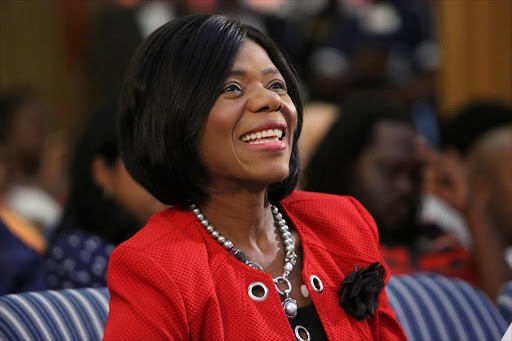 Social justice and law professor at the University of Stellenbosch and former public protector Thuli Madonsela has clapped back at EFF MP Mbuyiseni Ndlozi, who told her to go to hell during a heated debate about the Clicks shutdown.

The red berets on Monday protested at various Clicks stores across SA after the beauty and health retailer labelled black hair as “dry and damaged” in an online advert.

She commended scores who spoke against it on social media but condemned the violence and vandalism seen at some stores.

At least 37 Clicks stores were affected by the protests, and seven were damaged, including at Saveways in Witbank and Cycad in Polokwane.

Ndlozi dismissed Madonsela and her “coconut logic,” and said the EFF was exercising its constitutional right to protest. He also blamed authorities for the lack of punishment for racists.

Noted sir. But seriously, shouldn’t it be those that steal from and abuse the poor for personal gain that not only go to hell but get a special place in hell sir? #Clicks #BlackHairMatter https://t.co/8QYyn8u9GH

Hell is for the self-righteous who also turn their back against their God given skin. Who try to escape their bodies. The hottest place in Hell is particularly reserved for false judges!

It doesn’t matter with us blacks, your in-laws have already made our lives a living Hell. https://t.co/S0l4TEgNlT

Madonsela shared a video of women speaking against the discrimination of black, natural hair. “This is how young women, using their agency have chosen to tackle the #Clicks #BlackHairMatter. I read their action as a call to #Clicks and others to examine their perceptions of #BlackHair and black women's beauty,” she captioned the video.

This is how young women, using their agency, have chosen to tackle the #Clicks #BlackHairMatter. I read their action as a call to #Clicks and others to examine their perceptions of #BlackHair and black women’s beauty. I consider the action to be #Epicleadership and cerebral https://t.co/qzHM7oLjPL