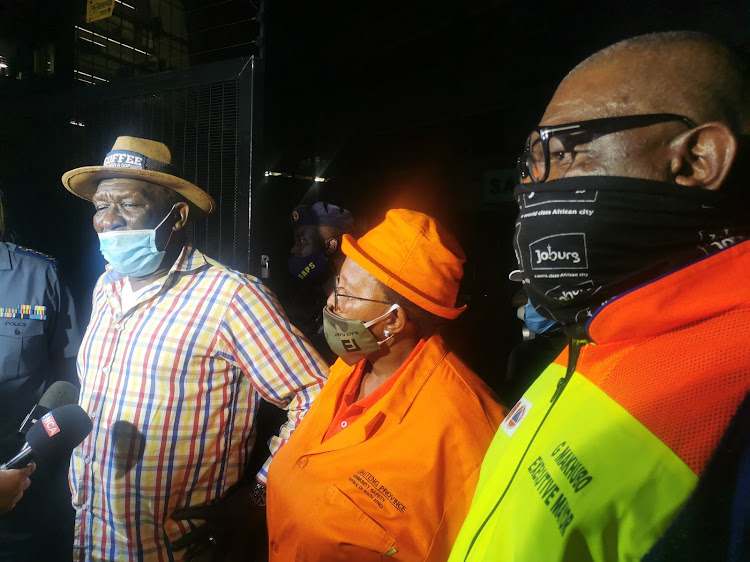 “Bheki Cele is so obsessed with alcohol but silent on gender-based violence (GBV) and human trafficking.”

This is one of the remarks from people who expressed their dismay with the police minister after he, alongside members of the SA Police Service and Johannesburg metropolitan police department, raided a nightclub, Blackdoor, in Sandton in the early hours of Sunday morning.

Videos of the raid were shared on social media by government officials. TimesLIVE reported that the manager of the club was arrested for breaking the lockdown regulations.

According to Cele's spokesperson Lirandzu Themba, liquor valued at more than R800,000 was seized during the raid.

On social media, many called the raid a “PR exercise” and that Cele was “fighting the wrong crime” instead of the scourge of GBV and human trafficking in SA.

The manager of the popular Blackdoor Lifestyle Lounge in Sandton, Johannesburg, has been arrested for breaking the lockdown regulations, police said.
News
1 year ago

In a written parliamentary response to the DA last week, Cele revealed that more than 130 police officers have GBV charges hanging over their heads.

Here is a snapshot of what Mzansi had to say:

That nightclub should be shut down AND perpetrators of human trafficking, abuse & murder of women & children should be held accountable AND we should ensure rule of law AND promote a society that is safe, peaceful & secure.

Bheki Cele gets mad gully when it's about alcohol, he even stays up late. He's like Batman, all the power to make real change but he crawls around in dark alleys fighting petty criminals and mentally challenged people

Bheki Cele is so OBSESSED with alcohol but silent on GBV and HUMAN TRAFFICKING...

Manifesting for Bheki Cele to take as much action as he does on alcohol related crimes , on Human trafficking and GBV🕯🕯🕯🕯🕯🕯🕯🕯

When it’s groove Bheki Cele doesn’t even mind sleeping at 04:00 but when it’s GBV and human trafficking he’s nowhere to be seen like the blackdoor was manager https://t.co/JDGky4MP67

Bheki Cele will go all out guns blazing against alcohol, but when it comes to human trafficking and GBV he is nowhere to be seen. People are losing their kids each and every day. Human trafficking is real.#StopHumanTrafficking #StopGBV

I'm worried about Bheki Cele's priorities as a police minister.

South Africa deserves a new Minister of Police who is passionate about fighting all kinds of crime, unlike Bheki Cele.

"Pease keep this energy for gender-based violence," your girl B* said.
TshisaLIVE
1 year ago

More than 100 police officers on GBV charges, including murder and rape

As many as 139 police officers have gender-based violence (GBV) charges hanging over their heads — and this at just 13 police stations across SA.
News
1 year ago