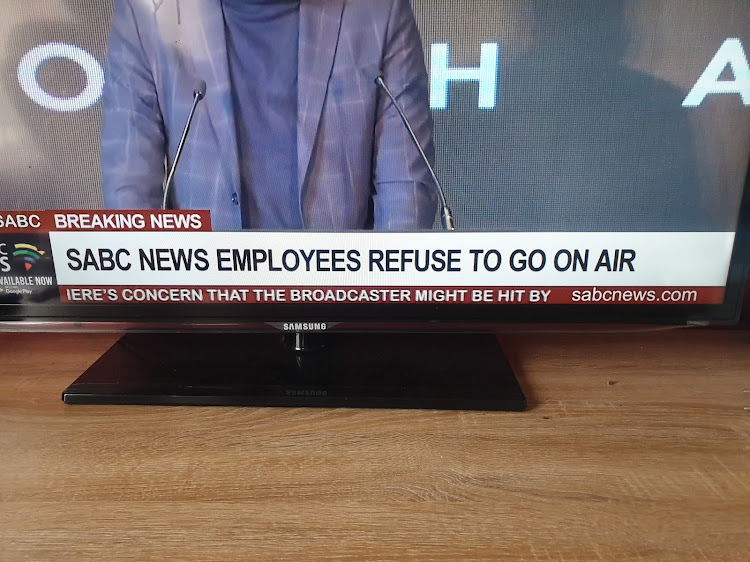 The SABC reporting that news staff are on a go-slow over the public broadcaster's intention to retrench hundreds of workers.
Image: Screen shot

SABC news employees at Auckland Park embarked on a go-slow, with some allegedly refusing to go on air as a heated meeting erupted over looming retrenchments on Tuesday.

This followed an announcement by the public broadcaster that it would be retrenching 400 staff members, though there were about 170 vacancies that employees could apply for.

Staff at the broadcaster's headquarters in Auckland Park, Johannesburg, have been taking part in lunchtime pickets since Monday.

But things got tense on Tuesday at an emotionally charged meeting where news presenter and journalist Chriselda Lewis made a plea to group executive for news Phathiswa Magopeni to reconsider the public broadcaster’s stance on retrenchments.

MUST WATCH: What they will not show you:

“When you came here, this is not what we expected from you. So many of us in the journalism industry are looking up to you,” she said.

Lewis took a swipe at some SABC managers, telling them that the workers were the ones who kept the SABC going since long before they were appointed.

The broadcaster reported a net loss of R511m for the year ending March 31 2020 and a decline in revenue from R6.4bn the previous year to R5.7bn, presenting its financial results for the 2019/20 financial year on Tuesday.

Magopeni told staff during the meeting that she would retract retrenchment letters that were issued to some of them earlier. “I will go and negotiate this afterwards but I cannot continue with the retrenchment process,” she told staff.

Magopeni said she understood the anger, anxiety and what staff were going though.

The SABC said in a statement earlier in November that the organisation required a “difficult but necessary restructuring process that will result in the reduction of staff”.

“The SABC is fully cognisant of the fact that this process will affect people's livelihoods and, moreover, have a knock-on effect on their families and communities. However, having exhausted all other options, we are now faced with the difficult task of having to restructure the organisation to ensure its sustainability.”

The ANC and its alliance partners said on Tuesday they were fully behind workers at the cash-strapped broadcaster.

After a meeting on Tuesday, the secretariat of the alliance — made up of the secretaries of the ANC, SA Communist Party (SACP) and Cosatu, said it was opposed to the intended transfer of a part of the public broadcaster — as communicated by the SABC to unions and workers in a letter dated November 11.

“This amounts to both outsourcing and privatisation, to the extent that those who control the SABC intend to convey a part of the public broadcaster or its operations to a private profit company.”

The secretariat expressed solidarity with the workers and vehemently opposed what it called “weakening of the SABC and its public broadcasting mandate and its subordination to commercial interests”.

The secretariat called upon members of all alliance formations to actively support the Communications Workers Union and trade union unity at the SABC and Cosatu in the fight against retrenchments and in defence of public broadcasting.

The SABC reported a net loss of R511m for the year ending March 31 and a decline in revenue from R6.4bn the previous year to R5.7bn, group CEO Madoda ...
News
1 year ago

The SABC has removed Umhlobo Wenene Breakfast show host Phiwe “Pastor The DJ” Nozewu after he expressed "joy" on Twitter regarding a confrontation ...
News
1 year ago

Communications minister Stella Ndabeni-Abrahams has told parliament that her ministry did not support the retrenchment of staff at the SABC.
Politics
1 year ago