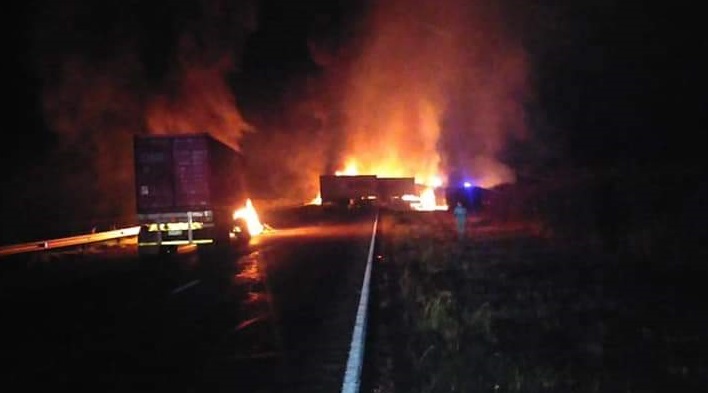 Some of the trucks petrol bombed in Gauteng on Thursday night.
Image: Twitter/@TrafficSA

Police have launched a manhunt for the perpetrators who allegedly petrol-bombed nine trucks on the N3 and R103 near Heidelberg on Thursday night.

Gauteng police spokesperson Capt Mavela Masondo said preliminary investigations revealed that a white Toyota Quantum and a black VW vehicle, both with unknown registrations, had blocked the road. Then a number of trucks caught fire after petrol-bombs were allegedly thrown at them.

This occurred at about 8.30pm on Thursday.

“Seven trucks were torched on the N3 between Heidelberg and Vosloorus while two trucks were set alight on the R103.”

Police said the motive for the torching could not immediately be confirmed.

“Police are investigating cases of malicious damage to property and are appealing to anyone who might have information that can lead to the apprehension of the suspects to please call the nearest police station or the crime stop number on 08600 10111.”

“The damage will amount to tens of millions of rand as expensive vehicles were destroyed and their loads were either damaged or destroyed.

“This was clearly an organised criminal act and the perpetrators need to be brought to book to send a clear message that this type of criminality will not be tolerated,” he said.

“We cannot afford to have our economy held to ransom and sabotaged in this way.

“The movement of goods on our roads is vital to the Gauteng and South African economy and we should do everything in our power to protect truckers and their loads.”

A long-haul trucker was on his way home to his wife when his vehicle got a puncture and he was forced to pull over at the side of the road near ...
News
1 year ago

Truckers who transport goods along some of SA’s busiest freeways are increasingly being targeted in violent attacks that leave them scarred and ...
News
2 years ago

Bread is not a meal for a working man: Truckers on hunger and job fears

Truck drivers who spend hours on the road, dependent on getting hot meals at their rest stops nestled in petrol stations along their routes have told ...
News
1 year ago