Female hiker dies after collapsing during ascent of Table Mountain 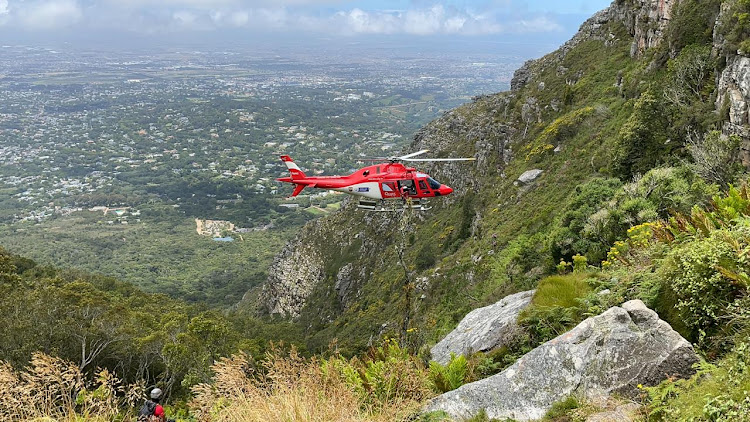 A helicopter contracted to the department of health was part of attempts to rescue an unconscious hiker on Table Mountain on Saturday.
Image: Norbert Stallkamp

A female hiker died while climbing Table Mountain on Saturday.

Johan Marais, spokesperson for Wilderness Search and Rescue (WSAR), said his team was alerted to an unconscious hiker about 200m from the top of Skeleton Gorge after 10am. Efforts to resuscitate the woman had failed.

“A vehicle with two paramedics proceeded via Constantia Nek and followed the jeep track into the back of Table Mountain to get to the top of Skeleton Gorge,” said Marais.

“In the meantime three more vehicles and a number of operatives deployed to Constantia Nek. By the time the hasty team reached the patient other persons reported that they had been administering CPR for about an hour.”

State pathologists are investigating the death of a person found on Table Mountain on the first day of national parks being open again since Covid-19 ...
News
11 months ago

He said an emergency helicopter, contracted to the department of health, was also dispatched to assist.

“A ground crew was deployed to the main entrance of Kirstenbosch Botanical Gardens to assist the helicopter,” he said.

“The paramedics were not able to revive the patient and the body was extracted by the helicopter. Another vehicle together with the first team into the back of Table Mountain brought the rest of the hiking party down the mountain.

"We mourn the death of a mountain hiker and extend our condolences to her family and friends.”

Police have launched an investigation after the remains of a game ranger were found in the Kruger National Park this week.
News
4 months ago

The man accused of killing two men and stabbing multiple others in Table Mountain National Park during a spate of violent attacks in 2018 was found ...
Multimedia
5 months ago

Several witnesses have implicated Blessing Bveni, but he denies the claims, suggesting they are lying
News
6 months ago
Next Article