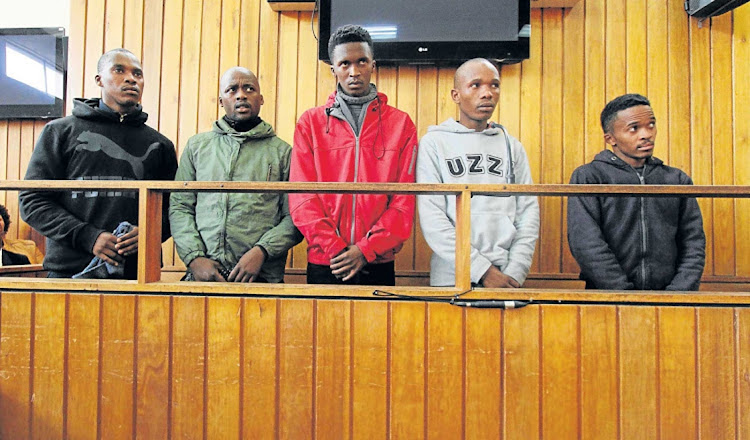 Mantshontsho, 23, of Cofimvaba, was killed in his room at WSU's Nelson Mandela Drive campus in May 2017. He had been stabbed multiple times in the upper body.

They were convicted of the murder, two counts of attempted murder, three counts of housebreaking and malicious injury to property.

The fifth accused, Sindile Kango, 26, was found guilty of malicious damage to property.

All pleaded not guilty to the charges.

The five men will be back in court for sentencing on February 19.

Four people have been arrested for the murder of a Free State police captain’s son.
News
1 year ago

During the lengthy trial, which commenced in 2018, the court heard of a quarrel about what kind of lifestyle the students would lead after graduating. It was then that Mantshontsho was stabbed.

Mantshontsho's killing caused outrage at the university, with his fellow medical students calling for the perpetrators to be jailed for life.

The two counts of attempted murder relate to Yamkela Jama and Khangelani Wilson, both senior medical students at the time of the attack, who were left injured.

At the time of the killing, Mafungwa, Mxokozeli and Matakane were medical students in their fourth, third and first years. Kango was a first-year economics student and Danca a third-year education student.

Man accused of murdering IFP councillor gets life behind bars

An accused in the 2019 murder of an IFP councillor has been sentenced to life imprisonment. The councillor, Mfanzo Nzuza, was gunned down at his home ...
Politics
1 year ago

National Prosecuting Authority regional spokesperson Luxolo Tyali said Kango could not be linked to any charge except malicious damage to property.

“Then we will argue based on those documents,” he said.

During the trial, 10 witnesses gave testimony. Prosecutor Done Triesch argued on behalf of the state.

WSU SRC premier Litha Ngalonkulu lamented the lack of security at the campus.

“Security issues remain a problem. Yesterday we went  to check if the campus was guarded but we found security guards sleeping. There is no change. All we do to ensure our own safety is patrol the campus in groups at night,” Ngalonkulu said.

More than 100 Walter Sisulu University students  were abruptly deregistered in the middle of the year.
News
1 year ago

'If we identify that there is a rapid increase, in particularly institutions or campuses, of infections, we will close those institutions,' said ...
News
1 year ago