Taxman a big loser in the aftermath of the ban, according to study 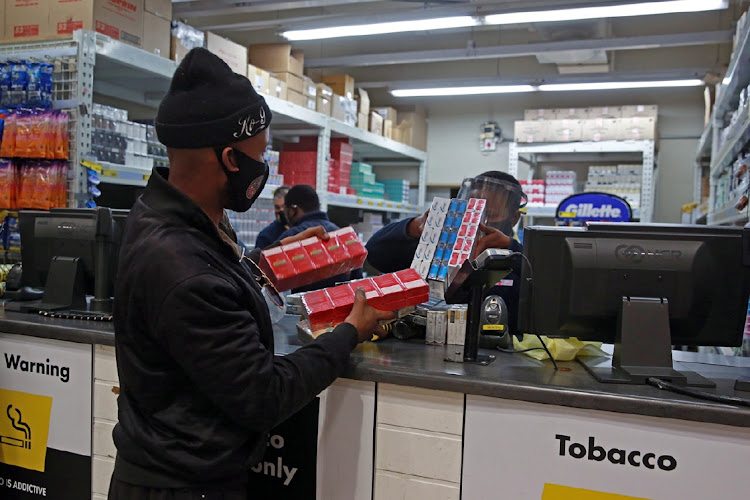 The government lost taxes and enabled an illicit market, yet only 8% of smokers quit during the sales ban - and half of those who stopped smoking indicated they started again when the ban was lifted.
Image: THAPELO MOREBUDI

The prohibition did not prevent smoking either: 85% of smokers kept smoking during the cigarette ban, only 8% quit and half of those who stopped smoking indicated they started smoking again once the ban was lifted.

Tobacco sales were prohibited between March 25 and August 17 as part of the government’s response to the Covid-19 pandemic.

There were about 6.7 million adult smokers in SA before the start of the lockdown, the report estimates.

The average daily number of cigarettes smoked by smokers decreased from 7.9 cigarettes in 2017 to 6.5 cigarettes during the sales ban and up to 8.8 cigarettes after the ban.

There has been a substantial increase in employment due to eased lockdown measures from last year, but the country continues to battle against hunger.
News
1 year ago

Adjusted for inflation and expressed in constant November 2020 prices, the average price of cigarettes increased by nearly 200% between 2017 and the highest point it reached during the sales ban.

Total expenditure on cigarettes (equivalent to total gross turnover of the tobacco industry) changed from an annualised R32.1bn just before the ban to an annualised R72.9bn at the peak of the sales ban, and fell to R31.3bn once the prohibition was lifted.

“Very sharp increases in the retail prices - more than 400% at the peak of the sales ban - together with a 70% increase in sales volumes, meant that the total estimated gross turnover of the non-multinationals increased very sharply during the sales ban.

“Even after the lifting of the ban, the total gross turnover of this group is probably more than double what it was before the ban.”

The National Treasury budgeted that R15bn would be collected from tobacco excise taxes in the 2020/21 financial year. The 20-week sales ban means the government lost about R5.8bn during this period.

“There are no angels in the industry. All tobacco companies, both the multinationals and the locally based companies, have been accused and/or found guilty of various kinds of wrongdoing,” said the report.

British American Tobacco SA (Batsa) says it is alarmed by the record increase in armed robberies targeting its products, which it says is stoking ...
News
1 year ago

“The non-multinationals, which more than the multinationals have previously been found to sell cigarettes at prices at which it is impossible for the full tax to have been paid, have benefited disproportionately from the ban.

“Because they already had well-established distribution channels into the illicit market before the ban, it seems likely that the sales ban has entrenched that market.”

A large increase in the excise tax at the start of the lockdown would probably have yielded a similar outcome, in terms of a reduction in cigarette use and a decrease in smoking prevalence, as the sales ban, said the report. “However, it would probably have been less disruptive and yielded more revenue for government.

“That the already well-established illicit market became more entrenched during the sales ban has complicated the task, for Sars and other law enforcement agencies, of reducing the illicit market.”

Clamping down should be a national priority, said the report.

Dlamini-Zuma hits back at critics of the tobacco ban

Co-operative governance and traditional affairs minister Nkosazana Dlamini-Zuma on Wednesday hit back at those who criticised her handling of the ...
Politics
1 year ago

The Mdatsane regional court has sentenced a 28-year-old man to 25 years in prison for his involvement in an armed robbery of a tobacco vehicle in ...
News
1 year ago

Rookie mistakes: Why NDZ’s cig ban was a disaster before it even began