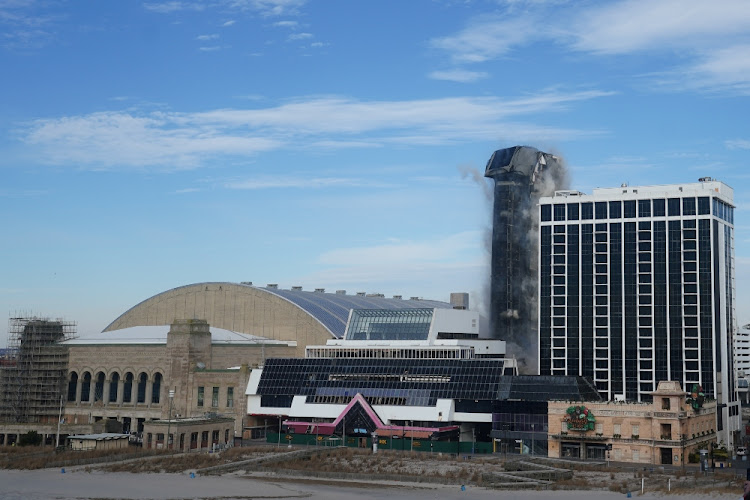 The Trump Plaza in Atlantic City, US, collapses after a controlled demolition on February 17 2021.
Image: REUTERS/Carlo Allegri

Crowds cheered as the Trump Plaza hotel and casino in Atlantic City was demolished on Wednesday, the oceanfront eyesore bearing the name of the former US president disappearing in a cascading collapse.

Trump, a Republican who was a real estate developer before moving to the White House, opened the hotel and oceanside casino in 1984 but lost control of the property in a 2009 bankruptcy.

A rapid series of explosive dynamite booms heralded the deliberate destruction of the blighted skeletal building, which dissolved into a pile of rubble that sent enormous brown clouds swirling around surrounding structures in the Jersey Shore resort city known for gambling, beaches and its boardwalk.

It took the decrepit building about seven seconds to completely collapse onto the sand, vanishing from the boardwalk skyline shortly after 9am local time.

Air horn blasts, whistling and cheers erupted as crowds of several hundred people, most of them wearing masks to guard against the spread of Covid-19, milled around pickup trucks parked nearby to watch the spectacle.

Onlookers were charged $10 (about R145) for a prime viewing spot in an area that was recently used as a food distribution site for the struggling city of 38,000 people.

His former hotel came down in the wake of Trump becoming the first president in US history to be impeached twice. Last week the Senate acquitted Trump of inciting a mob that stormed the Capitol on January 6.

It was Atlantic City's tenth casino and, in addition to gambling, hosted heavyweight boxing prize fights.

Trump's name remained on the business as part of a licence agreement until 2014, when the casino closed as Atlantic City struggled as a gambling resort, with growing competition in other states.

Billionaire investor Carl C Icahn acquired it out of bankruptcy in 2016.

Former US President Donald Trump abruptly parted ways on Saturday with the two lead lawyers working on his defense for his Senate impeachment trial, ...
News
1 year ago

There was no distribution plan for the coronavirus vaccine set up by the Trump administration as the virus raged in its last months in office, new ...
News
1 year ago