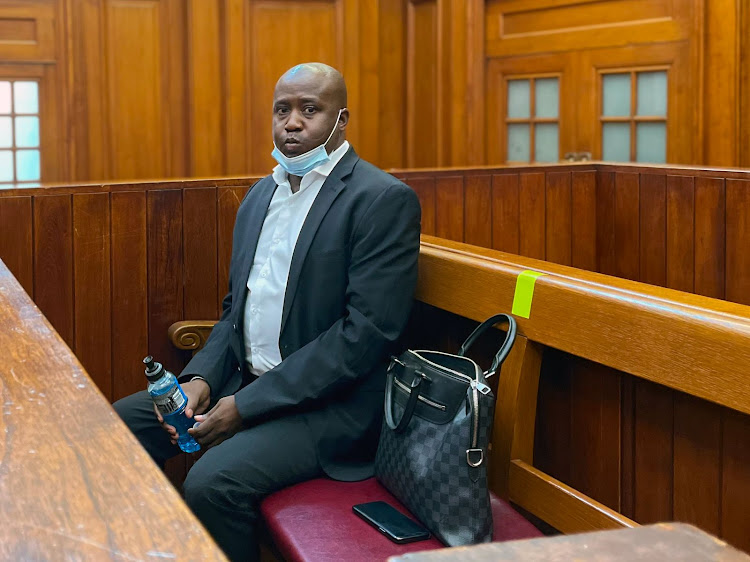 Former state security minister Bongani Bongo on Friday claimed a faction within the ANC was behind his prosecution because they believed that he had access to files containing the names of “spies”.

He made the claim outside the Western Cape High Court after judge president John Hlophe granted his discharge application on a charge of corruption and found him not guilty of allegedly attempting to bribe Eskom inquiry evidence leader Ntuthuzelo Vanara.

He and a crowd of ANC MPs - including former finance minister Malusi Gigaba - sang Umshini Wami, the unofficial war cry of the Jacob Zuma-aligned radical economic transformation (RET) faction, as they left the courtroom.

Bongo and his supporters cheered and sang "Mshiniwam", the Radical Economic Transformation (RET) faction within the ANC's unofficial warcry, after Hlophe found him not guilty on the charge that he allegedly attempted to bribe Eskom enquiry evidence leader Ntuthuzelo Vanara. pic.twitter.com/Ho7tXmvOY0

Hlophe's judgment was scathing of Vanara, the sole witness to the alleged bribery attempt.

Vanara had accused Bongo of approaching him on October 10 2017, 10 days before parliament's commission of inquiry into state capture at Eskom was due to start.

Hlophe said other state witnesses contradicted Vanara's evidence in some material aspects, and created reasonable doubt on his evidence. Hlophe went further, saying that Vanara didn't report the matter to the police, instead reporting it to parliament, because in Hlophe's view, he himself didn't believe that what Bongo had done was a crime.

Hlophe said DA MP John Steenhuisen gave an incorrect statement to the Hawks when he finally reported the matter to them in 2018. Steenhuisen had claimed that Bongo had “bribed” Vanara, insinuating that money was paid. Hlophe's view was that Steenhuisen could only have got the information about what had transpired from Vanara himself.

Bongo's supporters allege that a faction in the ANC had colluded with Steenhuisen, Vanara and the state's other witnesses to fight a campaign against Bongo. Overtures were made aligning Bongo's prosecution to that of Ace Magashule and former president Jacob Zuma.

The press were given rare insight into the alleged conspiracy theory as aspects of it materialised in live action on the steps of the high court.

Gigaba proclaimed that it was perhaps not a coincidence that Vanara had rushed to Stellenbosch directly after the October 10 meeting to meet the state's other witnesses.

“It's quite clear that we are dealing with a conspiracy to destroy him. The decision was taken somewhere in Stellenbosch to charge him. Whether this was a pure coincidence or the people who took the decision had gone there to consult their political principals who live in Stellenbosch, is something we may never get to know, but the coincidence is too big for us to ignore,” he said.

The RET faction's members are proponents of a conspiracy theory that Stellenbosch is the physical home of “white monopoly capital” and the seat of opposition to aspects like land expropriation without compensation.

In fact, Vanara had travelled to Stellenbosch, where his senior managers were in a National Education, Health and Allied Worker's Union (Nehawu) conference, to report the matter to them.

With the prosecution case against accused former state security minister Bongani Bongo nearing its end on Friday, he and his legal team appeared ...
Politics
1 year ago

ANC MP and national executive council member Tandi Mahambehlala said, “The case against Comrade Bongo was nothing but a conspiracy collaborated by those within our organisation, working with the forces of doom like the DA, to destroy our own, one way or the other.”

“We hope that when we go to Bloemfontein we will have the same conviction, because charges against the secretary-general of the ANC Ace Magashule are nothing but frivolous, the same way as these ones against Bongo,” she said.

Bongo told the press that the narrative of the “past three years” was a sideshow aimed at subverting expropriation without compensation.

“We have warned those who continue to use state institutions in political battles. I said when I was arrested that this is just a political gimmick. My name for the past three years has been in the media space that I'm corrupt, but I was [not]," said Bongo.

“When we are done, we are going to explain how this conspiracy works. It is meant to deviate from ensuring that there is economic freedom in our lifetime,” he said. “We view this as a very serious indictment to the progressive forces [sic].”

Asked why these alleged forces went after him specifically, he said, “They went after me for the simple reason that I was the minister of state security. They have the view that I have the files of all the people who were spies in this country.

“So they think I have those files. Whether I have them or not, it's a discussion for another day,” said Bongo.

A week before Bongani Bongo was appointed state security minister, he allegedly tried to get a key figure investigating state capture at Eskom to ...
News
1 year ago

The state's second and third witnesses in the corruption case against former state security minister Bongani Bongo backed up aspects of the testimony ...
News
1 year ago

Advocate Ntuthuzelo Vanara feared for his safety when he received phone calls from then state security minister Bongani Bongo in October 2017.
News
1 year ago