Just before his extradition trial in Malawi on March 8, self-proclaimed prophet Shepherd Bushiri has claimed two of his lawyers and a private investigator were illegally detained by the Hawks 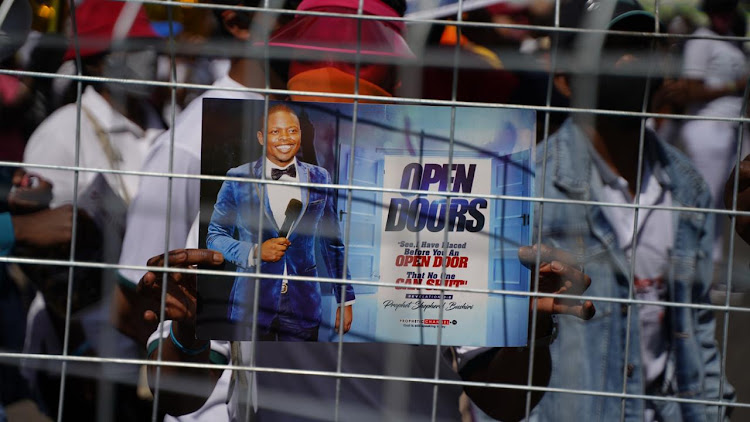 Self-proclaimed prophet Shepherd Bushiri says he learnt on Monday that the Hawks had detained his attorney Terrance Baloyi and his legal adviser Alvin Khosa for eight hours.
Image: Emile Bosch/TimesLIVE

Self-proclaimed prophet Shepherd Bushiri said he learnt on Monday that the Hawks had detained his attorney Terrance Baloyi and his legal adviser Alvin Khosa for eight hours.

Bushiri, who released a statement from the Malawian capital Lilongwe on Tuesday, said the eight-hour “unlawful detention” included a private investigator he once hired to investigate extortion and blackmail acts against him.

“It’s shocking to note that after my instructing lawyers and the private investigator being unlawfully kept in custody like convicted criminals, the senior state advocate, who issued the alleged warrant of arrests, was nowhere to be seen ... Court officials were left with no option but to release my lawyers from custody under the banner of claiming that the police investigations are incomplete, yet we know they have been investigating since 2017, [and] worse, they proceeded to arrest,” he said in a statement.

The Malawian fugitive has hinted at an extension of his church’s “spiritual territories”, including declarations that millions will be “unlocked” for ...
News
1 year ago

Bushiri added that this was “clear malice, torture, and harassment to the legal practitioners at its best”.

Bushiri said in his statement that though he was saddened by what had happened, he wasn't surprised. He said it was part of a scheme by certain Hawks officers to cover up dirt he alleged reported against them.

“As a matter of fact, I have, on several occasions, shared with the public the agony, pain, and persecution I have persistently suffered after I stood up to a series of extortion push from certain Hawks personnel, led by officers Phumla Mrwebi, Col Corrie Maritz, Du Plessis, and their colleagues,” he said.

“As early as 2018, Lt-Col Mrwebi has been investigating matters relating to Mr Shepherd Bushiri’s lawyers for corruption, defeating the ends of justice and intimidation after receiving purported withdrawal statements from rape victims. After the investigation was completed, the warrants of arrest were obtained from the magistrate’s court and ultimately executed on March 1 2021. The suspects were taken to court but could not be enrolled.

A formal extradition hearing for Malawian fugitives Shephard and Mary Bushiri has been set for March.
News
1 year ago

“The supervisors of the investigator are investigating the circumstance that led to the release of the suspects without enrolment.

“It should also be borne in mind that Col Maritz is not investigating the same cases as mentioned in Mr Bushiri’s statement,” said Mogale.

Bushiri said he left SA as he was certain that he wouldn't get justice.

“I left SA because I was certain that with Mrwebi, Maritz, and their team still handling my cases, as the situation stands, I won’t have justice before SA’s justice system,” he said.

He said he was not certain whether attorneys in SA would continue to represent him, fearing unlawful arrest and detention. He said it was the third time that his lawyers were detained wrongfully and unlawfully.

“How will I receive fair trial without legal representatives as those who represent me face this kind of harassment from certain Hawks members such as Mrwebi?” he said.

The Bushiri's and their co-accused — Landiwe Ntlokwana, Willah Mudolo, and his wife Zethu — face charges of theft, money laundering and fraud in connection with an alleged R100m investment scheme.

Their extradition case will be heard on Monday March 8 in Malawi.

In a sermon lasting more than an hour on Wednesday night on his TV channel and on Facebook, Shepherd Bushiri was thin on pastoral care but big on ...
News
1 year ago

Shepherd Bushiri’s attorney Wapona Kita confirmed to TimesLIVE that the daughters and their grandmother were on Friday prevented from travelling to ...
News
1 year ago

The daring escape from SA last year of the country’s most prominent fugitive couple, the evangelist and self-proclaimed prophet Shepherd Bushiri and ...
Opinion & Analysis
1 year ago