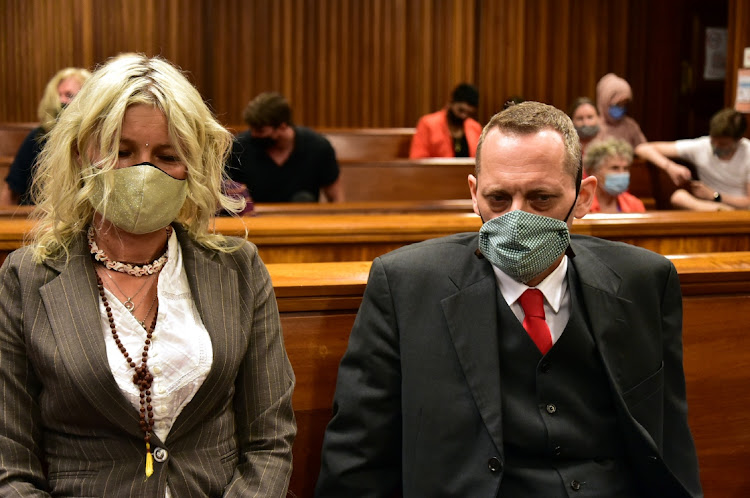 German nationals Jens Leunberg and Kristina Adler have been found guilty of murder and two counts of fraud in the Port Elizabeth high court.
Image: Eugene Coetzee / The Herald

A German couple has been found guilty of murdering another German national and farm owner Claus Schroeder from Port Elizabeth despite his body never being found — more than 11 years after his disappearance.

Judge Thembekile Malusi, according to a report in HeraldLIVE, said there was enough circumstantial evidence against the couple. A blood spot found on a VW Kombi parked on the farm, testimony from reliable witnesses and falsehoods presented by both the accused resulted in their convictions.

Jens Leunberg, 44, and Kristina Adler, 46, were found guilty of murder, as well as accessory to murder and fraud by the Eastern Cape High Court in Port Elizabeth on Friday, the provincial Hawks said on Sunday.

The couple approached Schroeder with false bank statements in 2009 to buy his farm in Owvanuk, near Thornhill, said Hawks spokesperson Capt Yolisa Mgolodela.

An agreement was drawn up to sell the property for an amount of R8.5m.

Mgolodela said after negotiations and agreement on the purchase price, the accused could not come up with the money and Schroeder became suspicious. He is believed to have confronted them and was then killed. His body was never found.

A person who allegedly contracted assassins to commit the murder has not been charged by the NPA, says AfriForum.
News
1 year ago

Schroeder disappeared on August 14, 2009. The German couple was arrested a year later.

Leunberg and Adler came to SA in 2007, allegedly leaving a trail of crime behind them. Besides the murder of Schroeder, they were also accused of fraud totalling R62m.

HeraldLIVE on Friday reported the conviction was the first of its kind for Port Elizabeth in that the body was never recovered.

“We have waited for so long to be where we are and where we wanted to be. We knew from the beginning they were involved,” Schroeder's wife, Tanja, told TimesLIVE's sister publication after the judgment.

“If someone said to me 11½ years ago we would wait so long to get confirmation, we would never have believed them.”

Malusi found Leunberg guilty of the murder, and Adler guilty as an accessory after the fact.

The case has been postponed to April 7 for sentencing.

A German man has handed himself over to the police to face charges of murdering Jeffreys Bay businessman Claus Schroeder. According to The Herald ...
News
10 years ago

A 17-year-old boy has been arrested for the murder of Kaizer Chiefs and Bafana Bafana goalkeeper Itumeleng Khune’s sister, North West police ...
News
1 year ago

Ntuthuko Shoba remains in custody pending his next court appearance on March 25, for the indictment to be transferred to the high court.
News
1 year ago