Adam Habib steps aside as N-word investigation gets under way 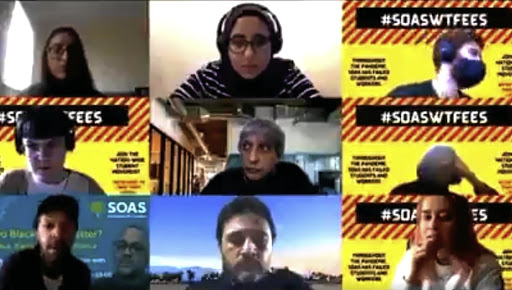 Adam Habib, centre, in the video call with students during which he used the N-word.
Image: Screenshot

Prof Adam Habib has “stepped aside” from his new job as his employers probe racism claims against him after he was recorded saying the N-word in a discussion with students.

The former Wits university vice-chancellor recently took up the position of director at the University of London’s School of African and Oriental Studies (SOAS). But Habib is now under fire after, in a video circulating on social media recorded during an online meeting with students, be uses the “N-word” in full.

This after one student points out that someone used the word to refer to a student. Students were complaining that some lecturers had used the slur and that complaints from black students were ignored.

“I come from a part of the world where we use the word,” says Habib.

Immediately after he said it, a black student who was part of the meeting tells Habib he had no right to use the word.

Former Wits University vice-chancellor Adam Habib has come under fire after he used the N-word during a video call with students at the University of ...
News
10 months ago

“You are not a black man, you cannot use the word, regardless of your lived experience,” he tells Habib.

SOAS said it was investigating the incident. In a statement on Thursday, SOAS board chair Marie Staunton confirmed that Habib would step aside while the probe was under way — “so as not to compromise the investigation”.

“Adam will step aside as of today, ahead of the commencement of the investigation and until the conclusion of the process,” said Staunton.

In a statement on Tuesday, the school said it was engaging with all affected parties over the incident — this included an “unreserved apology” that Habib issued.

“We know he recognises the significant impact which this has had on SOAS as a community and an institution and we know he is committed to taking all steps he can to address this with colleagues. As trustees, we take these concerns from the SOAS community extremely seriously,” said Staunton.

“I said, ‘This is the first time I've heard of it, but if somebody has used the N-word against another human being — and I actually verbalised the word — then it would violate our policies and we would take action, and please bring it to my attention’,” he said.

He insisted his use of the N-word had no “malevolent intention”, saying: “It has become quite a controversy in part because some student leaders have mobilised around it and some South African actors have got involved in it.”

A textbook study of 'cancel culture': Helen Zille weighs in on outrage over Adam Habib and the N-word

DA federal council chair Helen Zille says the outrage faced by former Wits University vice-chancellor Adam Habib for his use of the N-word is a ...
Politics
10 months ago

Students at the University of London's School of African and Oriental Studies (SOAS) want former Wits University vice-chancellor Adam Habib to be ...
News
10 months ago

Lessons from the frontline: what I learnt from managing Wits for eight years

My last day in office as Vice Chancellor of Wits University was on 18 December, even though my tenure formally comes to an end on New Year’s Eve.
Opinion & Analysis
1 year ago