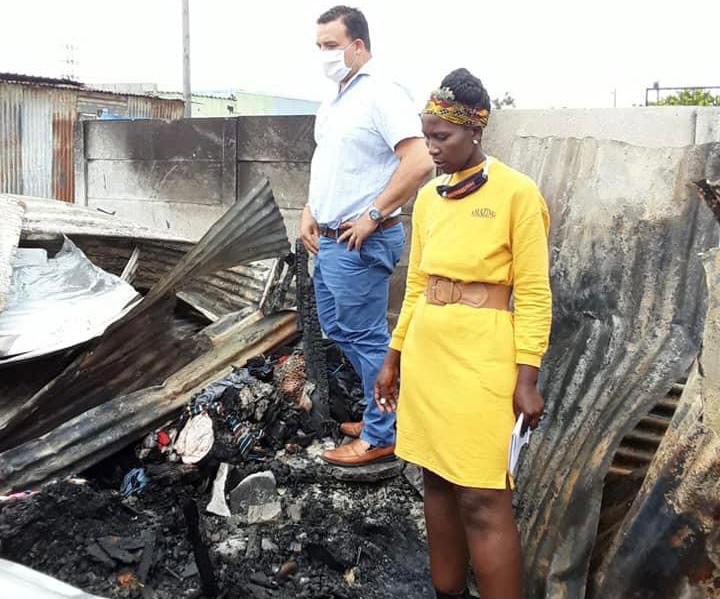 Ward councillor Angus McKenzie and Delft community leader Dineo Masiu inspect the charred remains of the fire that claimed the lives of three members of a family in the early hours of Sunday morning.
Image: Angus Mckenzie

Three Delft children between 17 and seven years old have been taken in by their aunt after their parents and 5-month-old twin siblings perished in a fire at their home in the early hours of Sunday morning.

Ward council Angus McKenzie said that a fire ripped through the backyard dwelling shortly before midnight on Saturday and trapped the mother, father, and 5-month-old twin boys.

According to News24, the city of Cape Town’s fire department received the call for assistance shortly before 11pm and firefighters from Belhar, Belville and Lansdowne Road responded. It is understood that four members of the family had already perished, but the fire was still alight.

Community leader Dineo Masiu told TimesLIVE that there was a confrontation after residents claimed that the fire department had responded too slowly.

“Everyone was upset and in shock and people were trying to put out the fire. The fire department left and I had to intervene to get other firefighters to respond with a police escort.

“The eldest girl is so traumatised because she saw her mother holding the twins in the fire. They are not doing so well,” she said.

“Everyone is afraid and sad, even the neighbours have been affected by this tragedy. They face a number of challenges now in dealing with not only the loss of their parents but also where they are going to stay and counselling to help them in the future,” Masiu said.

McKenzie and Masiu returned to the site of the fire and visited the family on Sunday.

“This morning I visited the family and friends who gathered and provided much-needed relief and support. These three young children have not only lost everything they ever owned but have also been left orphaned. I am appealing to communities, organisations and individuals to dig deep to help these three young children battle this cross that has been placed in their way,” said McKenzie.

It looked like just another shack fire.
News
1 year ago

When Ayabonga Herman from Booysens informal settlement in Johannesburg left his workplace on Friday, he did not expect to arrive home to his shack ...
News
1 year ago