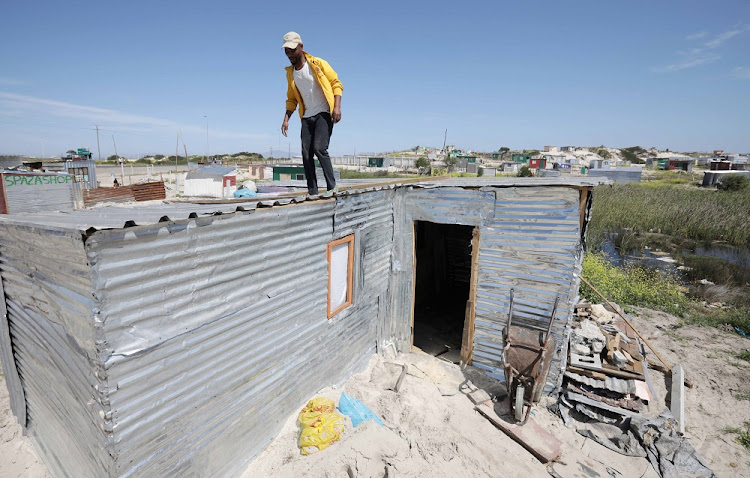 Zenithulu Yukuthwane walks on the roof of the shack he built after a group of people invaded land in the Driftsands Nature Reserve in Cape Town. File image
Image: Esa Alexander

The Western Cape is spending millions trying to curb the scourge of “orchestrated land invasions”.

A parliamentary reply has revealed 1,025 invasions have taken place on land owned by the City of Cape Town since March last year, said Matlhodi Maseko, a member of the provincial parliament and DA Western Cape spokesperson on human settlements.

Measures to stop invasions cost the provincial department of human settlements nearly R116m in the 2020/2021 financial year and nearly R269m since the 2018/2019 financial year, said Maseko.

“Orchestrated land invasions are often used as a way to jump the queue on the housing demand database with individuals hoping to force governments to place them ahead of other law-abiding beneficiaries.

“Beneficiaries who have patiently waited their turn should not be pushed further down the list by individuals who attempt to jump the queue.”

There was a safety concern too, Maseko said.

“Individuals and groups are often unaware when they invade land parcels that much of the land is not suitable for housing developments. Land parcels may be too small, lie on flood plains  or face other factors which make the development of housing opportunities not only impractical but also place residents and their homes at risk.”

Sunday Times Daily  recently reported that some land invasions had resulted in the formation of new neighbourhoods in the Driftsands Nature Reserve in Mfuleni and named Covid-19 and Sanitiser by their new residents.

In March, the province said 2,150 new free housing units, excluding expenditure on bulk services, could have been built with the money spent on preventing illegal land invasions.

Made homeless by lockdown, hundreds have settled on a Cape nature reserve and are refusing to budge
News
1 year ago