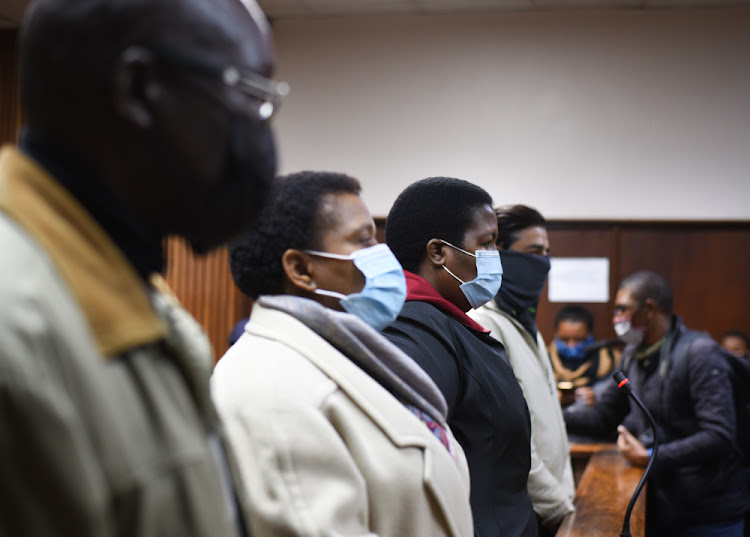 Both have been ordered to hand in their passports. Moorosi and Dhlamini are charged with contravening the Public Finance Management Act and fraud.

The two were arrested alongside businessman and key associate of the controversial Gupta family, Iqbal Sharma, and Peter Thabethe, also a former agriculture department head, on Wednesday in connection with the failed R288m Estina diary project.

Sharma and Thabethe were expected to apply for bail on Monday after their lawyers have analysed the indictment, the court heard.

In her affidavit, read out by her advocate Lawrence Manye, Moorosi said she was the CEO of Bloemwater for the past eight years, where she earned a salary of R94,100. She said this was a key position at Bloemwater and she was responsible for the “entire staff” at the company.

She said she had six children and a husband, who was paraplegic, and all of them depended on her. She said her 86-year-old mother also lived with her and was dependent on her.

Moorosi said she had no previous convictions or pending cases against her and that she would not evade trial. She said she intended to plead not guilty and there was no prospect of her being found guilty.

In her affidavit, through lawyer Willem Edeling SC, Dhlamini said that she was unmarried and had been living at the same address for the past 11 years. She said she had one child of her own at university and two adopted children, who were all financially dependent on her.

Dhlamini said she was the deputy director-general at the department of co-operative governance and traditional affairs (Cogta) in the province, and earned a monthly income of R71,000.

She said she comes from a stable “family support structure” and was financially supporting her mother, who lives in Klerksdorp in the North West.

She owned movable and immovable property, she said.

Dhlamini said she had one pending case against her, dating back to 2014, and was out on bail of R10,000 in the matter. She said she couldn’t afford to lose her job and believed that the state had a “weak case” against her.

She said she has deep-rooted ties within her community and therefore there was no reason for her to evade her trial. She said she exercised her right to remain silent.

The matter was postponed to Monday.

Government officials allegedly gave contracts to a company which did not attend any of the department’s compulsory briefing sessions.
Politics
1 year ago