Councillors claim City Power's response time to attending to outages is poor, mainly because of its new policy on the use of contractors. Stock photo.
Image: 123RF/loganban

Some residents in Joburg have been without electricity for more than two days, while others have been in the dark for at least six days — and it's not due to load-shedding.

Ward councillors in the city are inundated with calls from residents who have been without electricity for days, even after logging calls with City Power.

Nicole van Dyk, a ward councillor for Linden, said she has a number of households in her ward that have been without electricity for about six days. She said the poor response by City Power could be due to a new system the power entity was introducing.

According to the councillor, City Power previously relied heavily on contractors to deal with power outages in the city, but that is no longer the case. She said the new GM for City Power, Sipho Gamede, had halted the use of contractors attending to logged calls. She said though this was a good move, it could have been done in a better way.

“The problem now is that City Power doesn’t have enough staff at their depots to attend to all these faults reported in the city,” she explained.

Ekurhuleni residents who receive their electricity supply from the municipality will start to have load-shedding just like the rest of the country.
News
7 months ago

City Power spokesperson Isaac Mangena said the entity had not cancelled the contractors but changed their operating model to stop issues caused by contractors when they receive calls directly from dispatch. He said the problems customers kept complaining about include:

“We decided that from now on contractors will be additional resources for the depots and they will be controlled by the depots to improve accountability at the local level,” he said.

Mangena also admitted that they were experiencing a surge in calls but highlighted that this was due to adverse weather conditions and load-shedding.

“Load-shedding is putting too much strain on our resources, including technicians to respond to the physical switching while responding to outage calls.” 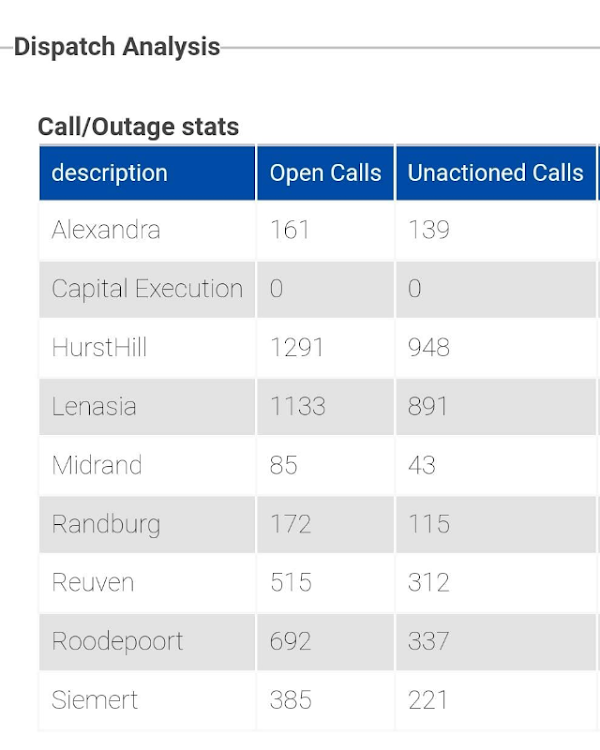 The total number of calls that were logged with City Power on Thursday morning.
Image: Supplied

Mangena said the backlog at Lenasia depot was caused by a protest in the area last week. He said technicians could not access the depot which led to a backlog.

In Roodepoort, he said calls were mostly from Tshepisong, where there was a trip due to overloading. He said along with some identified areas across the city, Tshepisong was  earmarked for load rotation to deal with overloading of the system.

Mangena said overloading was caused by illegal connections and the rapid increase in backyard rooms.

On the turnaround time to respond to logged calls, Mangena said the entity had agreed on eight hours as the time to respond to queries before they were escalated. He said the four hours they previously agreed on was not feasible, considering the travelling technicians  have to do, traffic, fault finding and the collection of material.

Other ward councillors took to social media to air their frustrations about the poor response time by City Power:

City Power Roodepoort (Hamberg Depot) has 4 technicians attending to low voltage calls and 2 operators attending medium voltage calls and outages today across 18 wards in Region C. There are currently 692 open calls/outages on the system with 337 that haven't yet been attended to

SA said a legal challenge by a rejected bidder for power-supply contracts, including one worth an estimated R218bn, was “without merit” and “self ...
News
7 months ago

Daily overloading and total blackouts in some substations pose a serious threat in many areas.
News
7 months ago