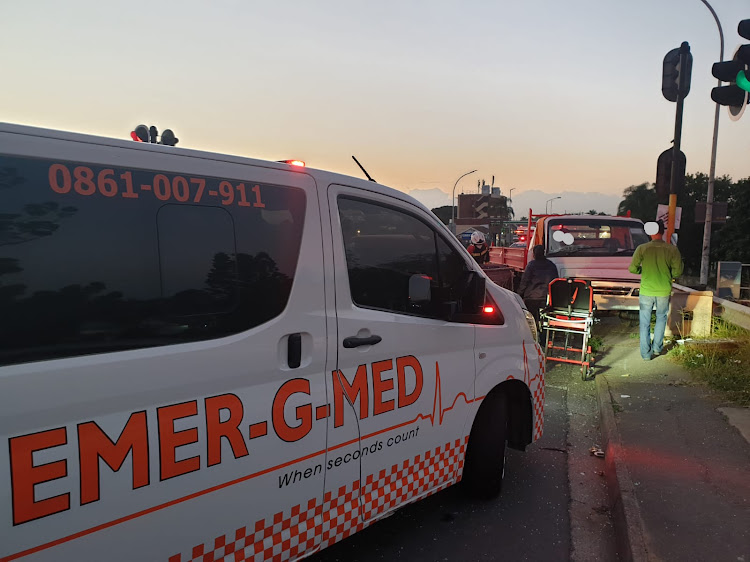 Emer-G-Med paramedics, together with Netcare911, responded to the scene of a serious motor vehicle collision on the Bellville Road off-ramp of the M7 Westbound carriageway in Durban.
Image: Emer-G-Med

A driver was cut free from an early morning wreckage on the M7 near Malvern in Durban on Tuesday.

Emer-G-Med spokesperson Kyle van Reenen said Emer-G-Med paramedics, together with Netcare 911, responded to the scene of a serious motor vehicle collision on the Bellville Road off-ramp on the M7 westbound carriageway.

“On arrival on scene two heavy duty vehicles were found to have collided leaving a driver of one of the vehicles entrapped in the wreckage. A rescue technician from Netcare 911 cut the man free using the jaws-of-life, while Emer-G-Med paramedics worked to stabilise him,” he said.

Once extricated and stabilised, the man was taken by ambulance to a nearby hospital for further care.

“The cause of the collision is unknown and will form the subject of a SA Police Service investigation,” said Van Reenen.

Six people were killed in separate crashes on KwaZulu-Natal roads on Monday morning.
News
3 months ago

A man who hitched a ride on the back of a heavy duty vehicle unbeknown to the driver, was killed when another truck crashed into them on the N3 ...
News
4 months ago