Tired of corruption, fair and square is how Makana sees future politics 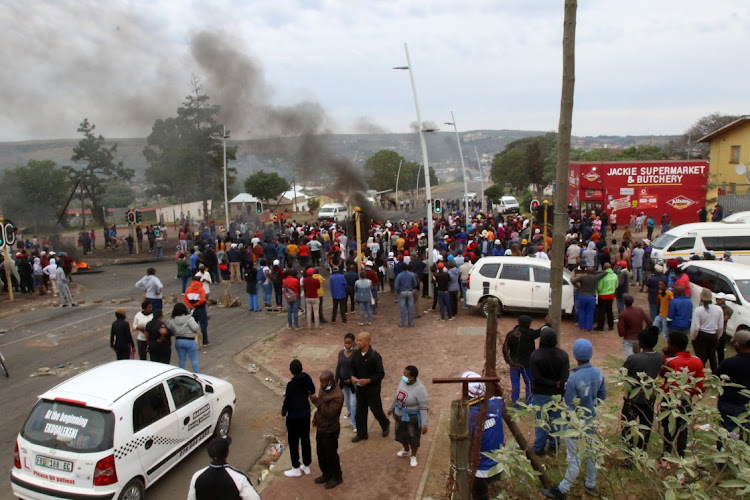 A large group of workers, taxi drivers and unemployed people in Makhanda in the Eastern Cape have come together to form a new organisation that will contest the upcoming local government elections.

Known as the Makana Citizens Front, it will put forward candidates in Makhanda and the small towns of Riebeek East and Alicedale.

The front, whose formation follows the three-day shutdown of Makhanda in May, is being steered as an organisation by meetings held every Sunday afternoon in Soccer City, also known as Fingo Square, in Fingo township. The square meetings decide the actions for the following week — for example, the most recent one resolved that 50 unemployed people would hold a socially distanced march on the municipality the next day, demanding that all councillors resign.

The other resolution taken was that businesses and citizens should stop paying rates. Everyone who came to the meeting volunteered to inform their neighbours of the other resolution, which was “we must not vote for corrupt political parties”.

The resolution states that their “system has failed us. We must never feel depleted in our efforts to save our city. We must fight thieving and corruption until we defeat the thieves.”

'Our homes smell like sewage and rubbish': Makhanda community takes city to court

Frustrated Makhanda residents and a high school in Joza are taking the Makana municipality to court over alleged negligence and inconsistent waste ...
News
11 months ago

Fingo Square is also the place where a new kind of politics is emerging, one that rejects the concept that organisations must have leaders who can be called to meetings with powerful politicians, only to return with excuses for failing to convey any of the residents’ grievances.

In the square there are no leaders, members or masses, says Unemployed People’s Movement (UPM) spokesperson Ayanda Kota, one of the activists involved in the Makana Citizens Front. Instead, it is a meeting of equals.

“During the shutdown, the community allowed the leaders of local organisations to go to where several MECs [members of the executive council] were waiting. They were given a clear mandate not to meet with the MECs, but to bring the MECs back to the mass gathering. But instead they sat with the MECs and they were in trouble with the people afterwards. The people said, ‘Let’s change them, let’s go back to the square.’ And now in the square, we will no longer accept authority, we will no longer accept being coerced. This is our space and we determine everything together,” said Kota.

The community members who gather at the square are very critical of traditional meetings and say they don’t like to meet as if they are “meeting in a hall”. Their argument is that there is a problem with the choreography at hall meetings: the powerful are at the table and they determine the agenda and everything else, including the pace of the meeting.

The difference at the square, Kota says, is that it “is mainly women who convened us into this square. They tell us what to do. People just disrupt while we are talking and they are free to do that. It is a very comfortable space and an amazing experience.”

Nosigqibo Soxujwa, 51, is a grade 3 teacher at a local primary school and runs a food kitchen in Joza. She distributes free meals three times a week, which she pays for out of her wages when she does not receive enough donations. Soxujwa has been an activist since the 1980s, first in Azapo and then in the UPM and the Makhanda-Grahamstown Crime Free Forum.

“I can’t say the square is democratic because it is much more than that,” she said.

“The mic is open and you just propose what you want to propose. Then if the residents see your view as the proper one, they will agree. The decisions that are taken are people-centred. Nobody is the boss, to the extent that there is no president or other leader. Everyone is equal, unlike the meetings we are used to whereby there is a chairperson we are looking to who will tell us what to say. In the square we feel free.”

Babalwa Budaza, 30, is another activist who has volunteered to build the Makana Citizens Front. “Women have huge problems in Makhanda,” she said.

“If women go to submit our CVs at the municipality, there are staff there who say they prefer to give them the job if the women sleep with them first. So now we are tired of that and we want to see that the rights of women are respected.

“Since this movement started, people want to vote for it because it is for the communities. People feel that there has already been progress. We are working every day and even when we don’t go out mobilising, people come to our houses and ask us how they can join the Makana Citizens Front,” Budaza added.

Siphosethu Soxujwa, 26, Nosigqibo Soxujwa’s daughter, is unemployed and a full-time activist. She says meetings held at their home introduced her to activism. “I saw they were doing great things for the community, so I joined them.

“The Citizens Front was first developed in the square meetings and was proposed by women because they are tired of the corruption. To think you have to sleep with someone to get a job, that is rape on its own. So we decided that it is better if the municipality is dissolved and we are led by people from the community who know the day-to-day struggles that we go through,” she said.

Siphosethu said she loves the way people listen at the square, openly disclosing their particular problems, whether with water, sewerage or unemployment, and receiving support from others.

“You voice out what you are going through and people are listening and sympathising because they are also going through the same thing. So it is a very good space,” she added.

The latest ban on gatherings under alert level four of the Covid-19 lockdown has put a temporary stop to the Sunday meetings, but the spirit of the square has already permeated the edges of the many townships in Makhanda.

“There is no rest for us because there is nothing right in this town. There is nobody who will correct things for us. We are not afraid to confront those in power. We want the youth to stand up and know that freedom will only come if they are not quiet,” said Nosigqibo Soxujwa.

Makana municipality spokesperson Anele Mjekula said the municipality was not aware of any reported complaints about supervisors or managers asking prospective employees for sex.

‘Some animals are more equal than others’: service delivery in SA

With frustration and desperation spilling over into peaceful and violent protests, when will the government take heed?
Opinion & Analysis
3 months ago

The auditor-general’s report on local government finances is a depressing read.
News
3 months ago

Parliament must act on the better electoral model before us

Renowned engineer and futurist Richard Buckminster Fuller said that "you never change things by fighting the existing reality". Instead, he said, "to ...
Opinion & Analysis
3 months ago