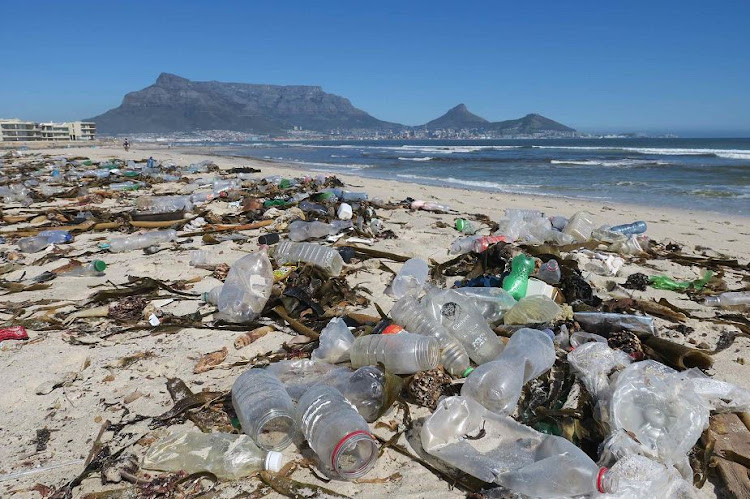 Nearly half the plastic bottles littering remote SA beaches have crossed the Indian Ocean or been dumped by ships, a new study has found.

Many bottles found on the southeast coast are between four and six years old and come from Indonesia, according to researchers at Cape Town and Nelson Mandela universities. 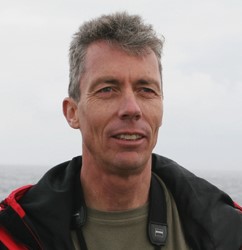 Recent manufacturing dates on bottles from China, Europe and South America show they must have been illegally dumped by ships, said lead researcher Prof Peter Ryan from UCT's FitzPatrick Institute of African Ornithology.

Reporting on an analysis of litter from 32 beaches, he said: “Bottles from nine countries on four continents were found within three months of the date of manufacture — they simply couldn’t have drifted here that quickly.”

Ryan and colleagues, who have written about their findings in the journal Environmental Pollution, said the number of plastic bottles was greatest at urban beaches, where most of them were local.

“Street litter in Cape Town and Gqeberha was dominated by bottles made in SA (99%), with foreign-manufactured bottles increasing from urban (4%) through semiurban (24%) to remote beaches (45%)," said Ryan. Foreign bottles were most common at beaches in De Hoop Nature Reserve and the Namaqualand National Park, where more than 70% were from other countries.

Dumping of plastics at sea has been banned since 1989, and the study calls on the International Maritime Organisation to tighten regulations to ensure ships — “particularly Asian shipping lines” — dispose of their waste at ports, rather than at sea.

Most bottles found on beaches were plastic, even though SA recycles an estimated 5-billion plastic bottles a year.

“The problem is that we produce so many single-use bottles in SA that even the relatively high recovery rates achieved translate into billions of bottles not being recycled,” said Ryan.

Foreign bottles were more common on the southeast coast of SA than the west coast, suggesting many of them drifted across the Indian Ocean from Southeast Asia before being brought ashore by the Agulhas current. The most common country of origin was Indonesia.

“It is widely assumed that 80% of plastic pollution in the sea comes from land-based sources. However, this figure is a very crude estimate and it is clear that the proportion varies depending on where you are,” said Ryan. 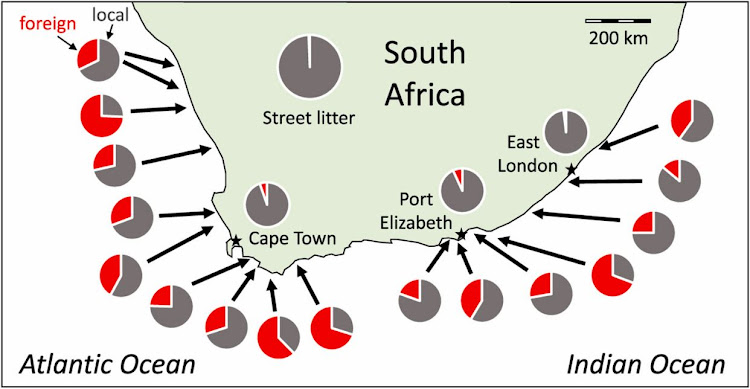 The locations where Peter Ryan's team gathered beach litter, and where it came from.
Image: Environmental Pollution

The team collected bottles from June 2019 to September 2020 between the Orange River mouth on the west coast and Msikaba on the Wild Coast in the Eastern Cape.

They stopped when they had collected 100 bottles on a beach, but on Bird Island in Algoa Bay they found only 43 bottles. In total, including repeat visits, they collected 13,240 bottles from 145km of shoreline and came across only one that was made from “degradable” plastic.

“Bottles manufactured in 80 countries were collected,” said the paper. “China was by far the largest source of non-SA bottles, comprising 44% of all Asian bottles and 37% of all foreign bottles.

380,000 new Coca-Cola bottles will soon be exchangeable for R9 each

“Overall, the Coca-Cola company was by far the largest single producer, contributing 15% of all bottles. Some 95% of the Coca-Cola bottles were manufactured in SA. It is encouraging that Coca-Cola ... is trialling a reusable PET soft-drink bottle with a high deposit value.

“The next two most common brands were both Chinese water bottles: Nongfu Spring and Master Kong.”

The oldest bottle found was a large canister on De Hoop beach that was manufactured in December 1974, but more than half the bottles were less than a year old.

“Bottles from at least nine foreign countries and four continents were found within three months of manufacture,” said the paper.

“The fastest recovery was of two Malaysian water bottles of the same brand, manufactured on the same day, that were collected at Cape Recife [in Gqeberha] 34 days after being manufactured.” 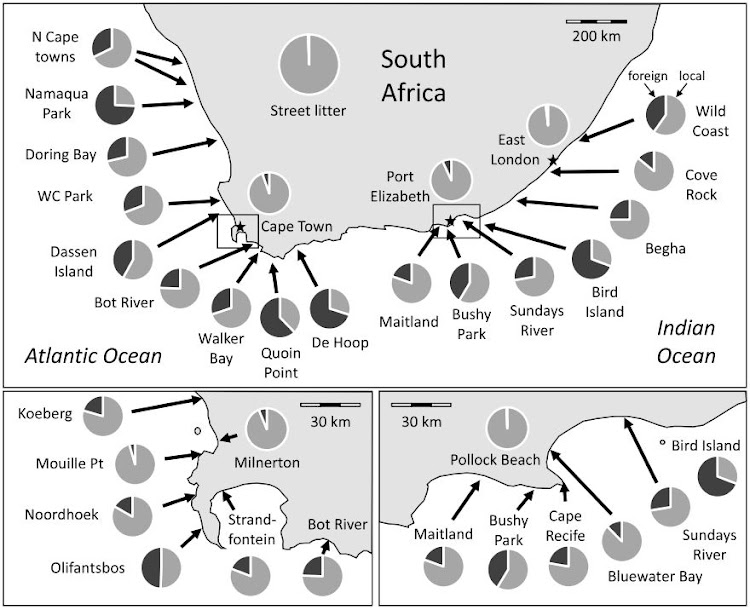 The locations of the 32 sampling sites.
Image: Environmental Pollution

The highest density of bottles was recorded at an urban beach in East London, but Dassen Island off Yzerfontein on the west coast was also heavily polluted.

Most foreign bottles were probably dumped from ships, the researchers said. “Many are crushed to expel most of the air and then resealed, a common practice to reduce solid waste volume on ships.”

The fact that the same brands from the same countries dominate foreign litter in SA, eastern Australia, the central South Atlantic, Kenya and southeast Pacific “indicated systematic disregard [for shipping waste disposal regulations] in certain sectors of the shipping community”.

The researchers added: “It could be argued that the southeast Asian countries responsible for most of this litter should be liable for cleanup costs throughout the Indian Ocean.”

A concerted, coordinated drive by both the government and private sector is needed, say two experts
Opinion & Analysis
1 year ago

When it comes to pollution in SA, the message is often in the plastic bottle

Seagulls took over Muizenberg beach in Cape Town during level 5 lockdown, when most people, besides ornithologist professor Peter Ryan and unruly ...
News
1 year ago

Plastic polluters should face similar consequences and penalties as those responsible for oil spills, environmentalists say.
News
1 year ago