Flooding havoc in parts of Nelson Mandela Bay, but rains not enough to ease drought crisis 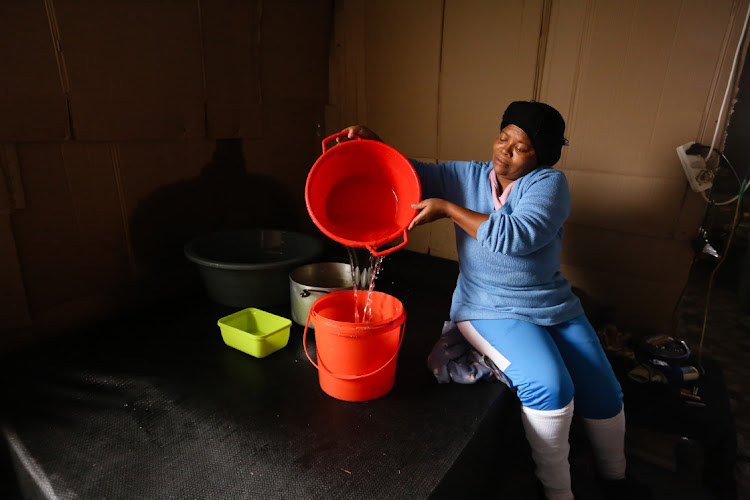 Sharefa Adams, from Missionvale, catches water leaking through her shack roof. She had to abandon her room after water started leaking onto her bed.
Image: WERNER HILLS

It was the kind of day that can restore hope.

For the first time in months, on Thursday Nelson Mandela Bay and surrounds experienced rain of the sort needed to counter the devastating drought gripping the region.

However, while heavy rain fell in the metro’s western catchment, it was not nearly enough to alleviate concerns over the water crisis, according to SA Weather Service spokesperson Garth Sampson.

“We can hope for our dams to rise a few percent but this is not going to allay our water crisis,” he said.

“Our consumption is way too high so my message is continue to use water sparingly.”

By the early afternoon, the deluge had not yet spread to water-starved citrus orchards in the Sundays and Gamtoos valleys but farmers were hoping for the best.

The Van Stadens Wild Flower Reserve received 23.8mm. In the western catchment, 17.2mm fell at Joubertina, 32mm at Kareedouw and 3.8mm at Patensie.

In the western region of the Eastern Cape and the Garden Route, 23mm fell overnight at Cape St Francis, 11.2mm at Port Alfred and 56.6mm at Plettenberg Bay.

No further figures were available by midafternoon on Thursday for key rainfall at Kareedouw, which indicates how much the Kouga Dam could rise.

Several other figures had arrived — including an extra 22mm at the airport, raising that figure to 59.8mm, and 10mm at Patensie, boosting the figure to 13.8mm.

There was also an extra 3mm at Joubertina, bringing it to 20.2mm in total.

Bloemfontein the coldest place in SA on Friday

Bloemfontein and Vereeniging were the coldest places in the country on Friday morning, the SA Weather Service said.
News
5 months ago

Icy temperatures gripped many parts of the Eastern Cape, with snow turning Hogsback into a winter wonderland.

On Thursday night, Jansenville stock owners were braced to bring in their animals from the cold to prevent fatalities.

The heavy rains were even felt on the offshore islands of Algoa Bay, where scores of penguin chicks were rescued as icy floodwater swept through their nests.

The rain came in waves in the Bay, flooding shack settlements and turning many streets into rivers.

In impoverished Missionvale, roads were reduced to mud and residents were forced to put out pots and buckets to catch water leaking through shack roofs.

Sharefa Adams, 40, slept on wet mattresses on Wednesday night after a section of the roof above her bed started leaking.

“Even if it stops raining my bedding will be wet, and the room where the leak was won’t be dry for five or six days,” Adams said.

“I understand the metro is in a water crisis and we need the rain, but every time it rains my house leaks.”

An afternoon announcement by Eskom that load-shedding would resume across the country could not have been less welcome. 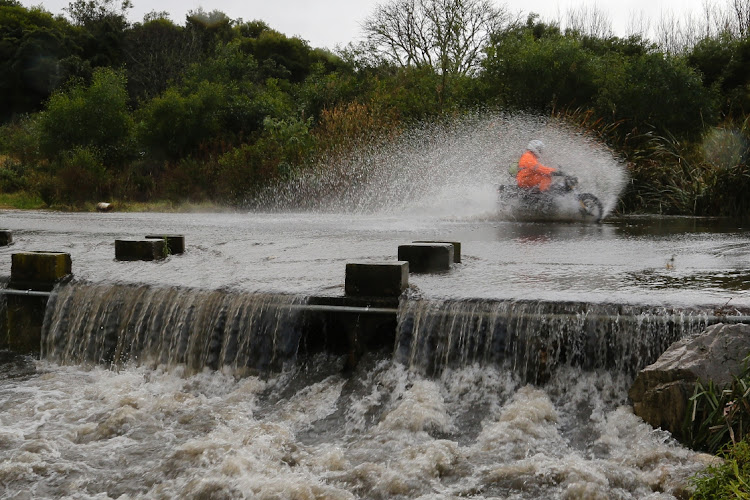 In other parts of the metro, flooded roads also caused havoc. On Settlers Freeway, between Humerail and the Russell Road off-ramp, a motorist lost control of his vehicle after it hit a puddle covering a large section of the left-hand lane.

The vehicle spun out of control and hit the barriers next to the road multiple times, damaging the car beyond repair.

Luckily, the driver walked away with only minor injuries. 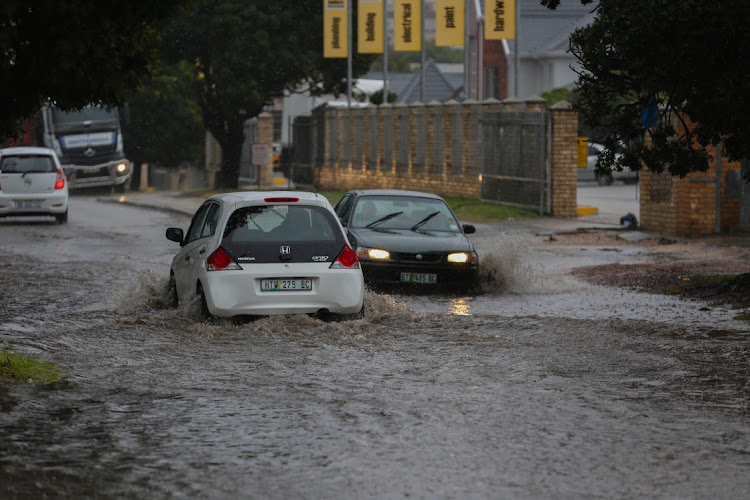 Sampson said some people were calling for more dams in the region, but asked: “How many dams must we build before we arrive at this problem again?

“It would help if every person had a water tank and made efforts to try to get off the municipal water grid.

“We also need to remove water-sapping alien black wattle in the catchments, and most of all we need to address the problem of over-population.” The driver lost control of this vehicle when it hit a water puddle on a flooded section of the Settlers Freeway.
Image: WERNER HILLS

“Once you pass Pretoria Portland Cement at Grassridge coming out of Gqeberha, the rain starts to stop. We have had some but not a lot.

“We are busy harvesting so if it came down we would have to stop because you can’t pack wet fruit.

“But we would take three weeks of sitting and not packing for some good rain because it is horrifically dry here.”

He said Sundays River Valley farmers got their water from the Gariep Dam on the border of the Free State and the Eastern Cape, which earlier this week was 90.5% full.

This meant Sundays River Valley citrus farmers were in a much better position than those in the Gamtoos, who rely on the nearly empty Kouga Dam. 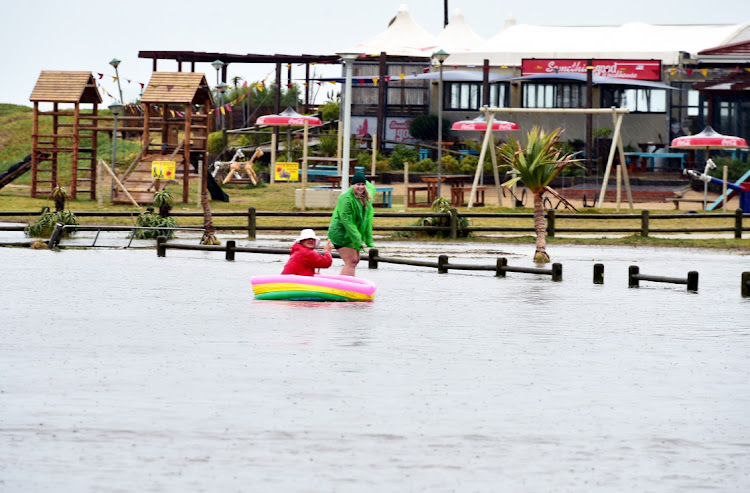 Flooding in Summestrand  turned out to be the perfect time for Edward Gibbons and Abigale Abrahamson to test their boating skills
Image: EUGENE COETZEE

Gamtoos Agricultural Association chairperson Petrus du Preez said little rain had fallen in the Gamtoos and, while good rains had fallen in the Langkloof, the tributary rivers flowing from there into the Kouga River feeding the Kouga Dam were so parched it was not clear if this would boost the dam.

“We had 8mm overnight in the valley and they had 20-30mm in the Langkloof and it’s still raining there so we are hoping for the best for the Kouga Dam.

“But we will have to wait and see.

“The Kouga River tributaries are so dry they absorb the water before it can progress and the Baviaanskloof, which supplies 40% of the Kouga Dam inflow.

“Besides the drought itself, another big reason the water is not flowing down the rivers is absorption by alien vegetation. That growth needs to be cleared on a regular basis.”

He said Gamtoos citrus farmers were 60-70% through their harvest and the yield volume was less than expected.

The fruit was smaller in size due to insufficient water at key points during the growth cycle. 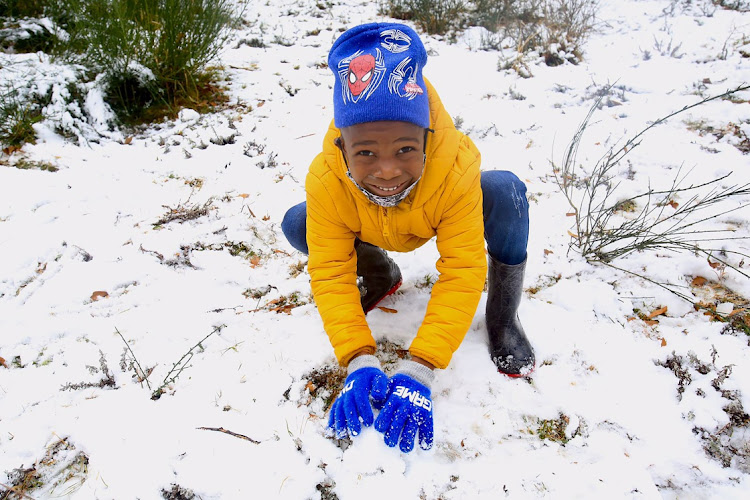 “We are in the middle of shearing and the cold is fine. We can handle either wind or rain, but not both together.

“If the sheep are wet, and then stand in the freezing rain, we could lose stock.”

Transnet spokesperson Ayanda Shezi said the group’s freight rail, pipeline, engineering and property operations were continuing as normal despite the severe weather but some port work had been affected.

“In the Eastern Cape, terminal operations have been halted due to inclement weather conditions and will  continue manually once it is safe to do so.”

Speaking from Bird Island, SA Foundation for the Conservation of Coastal Birds (Sanccob) ranger Eduard Drost said heavy rain was falling in short spells, gale-force winds were blowing and the sea swell was 4m to 5m.

“There are penguin chick fatalities and I have placed about 80 to 100 birds in safety.” The icy wet weather is a threat to the endangered African penguins on Bird and St Croix islands because guano to burrow in was stripped a century ago by prospectors.
Image: EDUARD DROST

“It is causing concern for motorists and residents of  lower-lying areas like Walmer township, and parts of Helenvale and Kuyga are receiving assistance from municipal disaster management staff due to waterlogged homes.”

WATCH | Children seeing snow in Kimberley will warm your heart

The video shared on social media shows a group of excited children reacting to the snowfall in Kimberley, Northern Cape.
News
5 months ago

As temperatures dipped below zero throughout the country, one tourism establishment in the southern Drakensberg was delighted to awaken to a winter ...
News
5 months ago

At least 60mm of rain was recorded across Nelson Mandela Bay’s catchment areas by 9am on Thursday, though falls were uneven, with good rains in ...
News
5 months ago