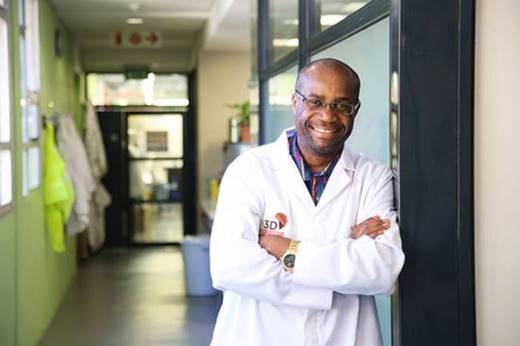 Prof Kelly Chibale, the founder and director of the University of Cape Town’s Drug Discovery and Development Centre, has been named among 22 rising black biotech leaders in the Timmerman Report, published in the US.
Image: SUPPLIED/UCT

A University of Cape Town professor and founder of the institution’s drug discovery and development centre has become the only African scientist to be listed among 22 black biotech leaders featured in the US's Timmerman Report.

Prof Kelly Chibale was chosen because he is among innovative black biotech leaders who are change-makers in their fields.

The publication of the report in which he is featured, marked Juneteenth (sometimes called “Black Independence Day”) on June 19, which is a US federal holiday commemorating the emancipation of African American slaves in 1863.

According to UCT, Chibale has received worldwide recognition for his work. In 2018, Fortune magazine named him one of the world’s 50 greatest leaders.

Chibale said being named as a global trailblazer was an honour.

“As a hard-core natural scientist and entrepreneur, I believe in the power of science to transform lives and create jobs,” he said. “Encouraging, supporting and incentivising scientific entrepreneurship will help move the continent of Africa forward.”

“I am relentless when it comes to pursuing this vision. For our work and lab, it shows [that] what we do collectively is world class.”

Chibale said he hoped it would inspire and encourage other black researchers to use the disadvantage they feel and/or experience on the basis of their race as an advantage.

“Despite the “real boundaries” to black scientists, one has to make a personal choice,” he said. “I choose to focus on doing what depends on me to do, while being grateful for any opportunity I am given. The beauty of freedom in academia and independent research is that no-one can stop me from thinking or coming up with research ideas and attracting funding from anywhere in the world to push my research ideas.

“I choose to use any boundaries, along with a deep sense of responsibility and gratitude, as a source of motivation, to be an inspirational role model for sustained world-class performance and excellence,” he said.

He said that youth from various ethnic, social and economic backgrounds needed inspirational role models who stood for world-class excellence in whatever they did, including in leadership and politics. Being the only African-based researcher on the list was significant in this regard, Chibale said

“It’s a big deal for me and UCT to be singled out in the US — arguably the biotech hub of the world. It is very special. The consistently world-class work my team does has put UCT, SA and Africa on the world map in drug discovery.

“The world has taken notice of what is coming out of Africa.”

Chibale said Africa needed science, not aid, to contribute to sustainable economic growth and tackle health challenges such as those posed by Covid-19.

“Africa needs to develop and strengthen her capacity to use science for the benefit of all who live on the continent. There is a need for us Africans to contribute solutions to unmet medical needs and drive job creation.

The emergence of Covid-19 has reinforced the need to build locally,” he said. Covid-19 had illuminated the need for “home-grown” biotech skills, especially in vaccine and therapeutics development, and the development of new drugs to treat malaria, tuberculosis and HIV, which are still rife on the continent.

“To provide sustainable health innovation solutions and prepare for future pandemics, we in Africa need to accelerate and scale up investments in health systems as well as health innovation in terms of R&D so we can one day produce our own vaccines and therapeutics — just like countries like China are doing.

Professor Salim Abdool Karim has won the prestigious John Maddox Prize 2020 for standing up for sound science in public.
News
10 months ago

Stellenbosch University (SU) will confer honorary doctorates upon six outstanding individuals who have made valuable contributions in the fields of ...
News
1 year ago

Serious injury did not stop this feisty professor

When Professor Jill Farrant sustained severe head injuries four years ago, resulting in short-term memory loss, no one ever imagined that she would ...
Lifestyle
9 years ago