Erlings Shoes is no more as Jozi’s city centre changes 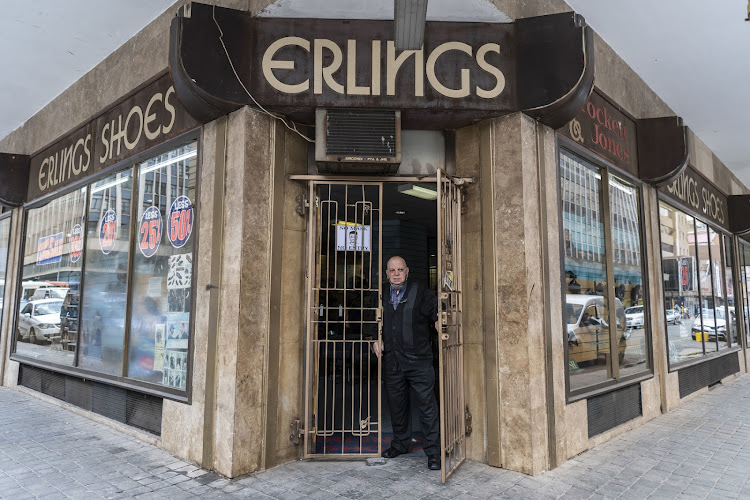 11 November 2020: Bill Hoffman, the last owner of Erlings Shoes in downtown Johannesburg, finally decided to retire at the age of 91 because business had been bad for a long time.
Image: Ihsaan Haffejee/New Frame

Old Johannesburg Is Vanishing, the title of a short essay by Herman Charles Bosman, is an apt epitaph for Erlings Shoes in Marshalltown, Johannesburg, which recently shut its doors after more than eight decades in business.

“What is it all about, a nostalgia for the past?” Bosman asked in the essay included in Bosman’s Johannesburg, edited by literary scholar Stephen Gray and published in 1986.

“Most people seem to have it. Collecting antiques, revisiting the scenes of one’s childhood, standing in awe before an ancient monument — all these are different aspects of sharing in that feeling about time that is bygone and irrecoverable.”

Even if one never went into the small, claustrophobic shop at the corner of Loveday and Fox streets in Johannesburg’s central business district, and walked on its sole-worn blue carpet, it’s likely most Joburgers were aware of the shop.

The dozen-storey Aegis Building, straddling Commissioner and Loveday streets, has a glazed ground-floor facade facing the Rand Club; lawyers Oliver Tambo and Nelson Mandela once had an office in the building. 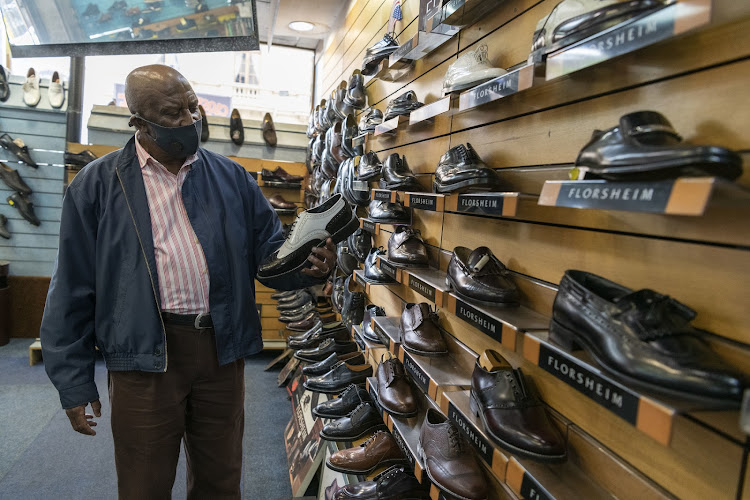 Jacob Sydney Molefe, the only remaining employee of Erlings Shoes by the time it closed its doors.
Image: Ihsaan Haffejee/New Frame

Classified as a heritage structure by the city and therefore not to be tampered with, it is an art deco edifice designed by architects Frank Emley and Frederick Williamson for an insurance company. The present structure, the building’s second incarnation, went up in 1934 on a site that in the 1880s had been Johannesburg’s first football field.

In its 87-year history, the shop had three owners: Ernest Erlings, Benny Lazarus and its last, Bill Hoffman, who was 91 years old when interviewed in November 2020.

“It’s also time for me to give up and retire and I have nobody who will take over at this particular stage. And with Covid-19, people [with] money to take over the shop are not really available, so I have decided to have a closing-down sale into December, perhaps into the new year,” said Hoffman, who ran the shop for three decades. 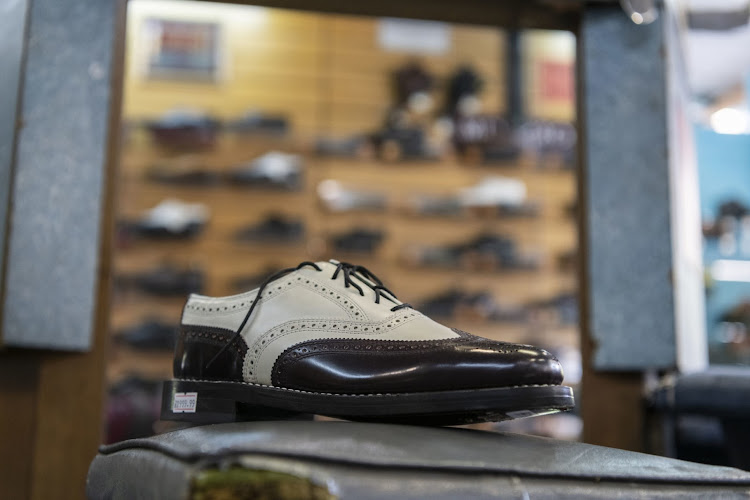 A classic two-tone Florsheim shoe for sale at Erlings Shoes, which counted Cyril Ramaphosa, Kgalema Motlanthe and Tokyo Sexwale among its customers over the years.
Image: Ihsaan Haffejee/New Frame

Its farewell closing-down sale was prolonged and went into the early months of the year, beyond the date Hoffman had envisaged. The coronavirus had been bad for business all around, he said, even in the malls.

“Covid-19 has been an absolute disaster, health-wise and economically, not just here in SA but throughout the world.”

Even though what Hoffman described as “the better type shoes” — Florsheim, Crockett & Jones, Barker and Grasshoppers — had been marked down, they didn’t sell as quickly as he thought, a reflection of the inclement economy.

A veritable who’s who

When asked who his customers were in the 30 years he ran the shop, Hoffman named some of the country’s Black elite: Cyril Ramaphosa, Kgalema Motlanthe, Tokyo Sexwale and other ANC leaders. The shop’s proximity to the Rand Club was a source of much of its business in its heyday, but with the flight of white capital to the north, trade had been slow.

During the busy days, Hoffman used to employ five people, but when he closed down his only remaining employee was Jacob Sydney Molefe, the shop’s de facto manager, the man who helped his ageing boss.

“I was thinking of retiring and so won’t look for another job,” Molefe said. 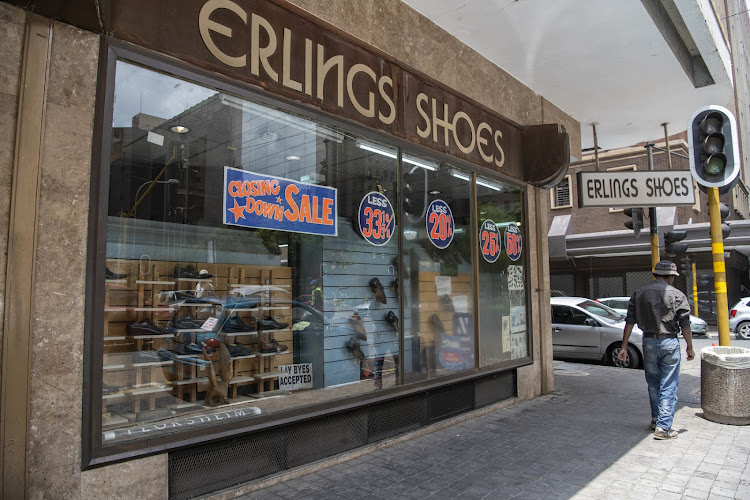 He is right. Most buildings in the vicinity have “to let” signs. Most of the Aegis Building’s floors are not occupied and, in fact, the structure is for sale.

Most of the city’s new residents won’t miss Hoffman’s nostalgia for the old Johannesburg, but some Joburgers and the feet of its flâneurs are sure going to miss Erlings’ eclectic selection of shoes. 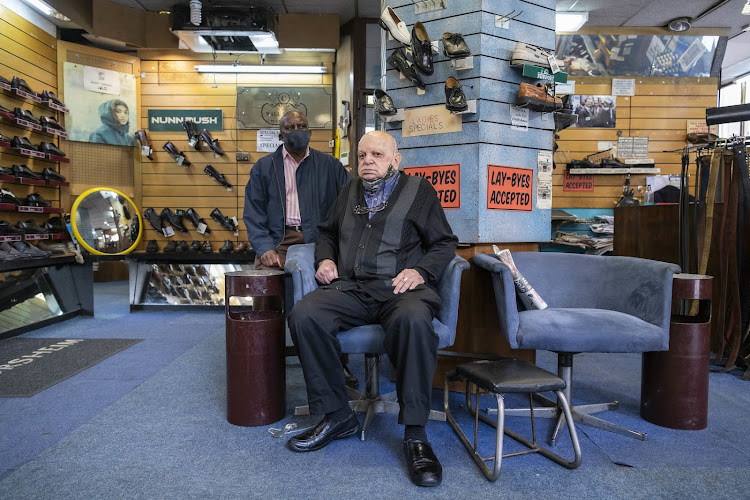 Jacob Sydney Molefe and Bill Hoffman are both now retired after the closing of the shoe business.
Image: Ihsaan Haffejee/New Frame

Suspects who robbed a motorist in the Johannesburg CBD fled after a taxi driver fired shots at them.
News
5 months ago

Seven men and five women were arrested in the early hours of Thursday morning at a hijacked property at Fairview, in Johannesburg's city centre.
News
7 months ago

When chef Siya Kobo lost his fine-dining restaurant due to lockdown, he didn't give up. Instead he teamed up with the JHB Culinary & Pastry School
Lifestyle
7 months ago