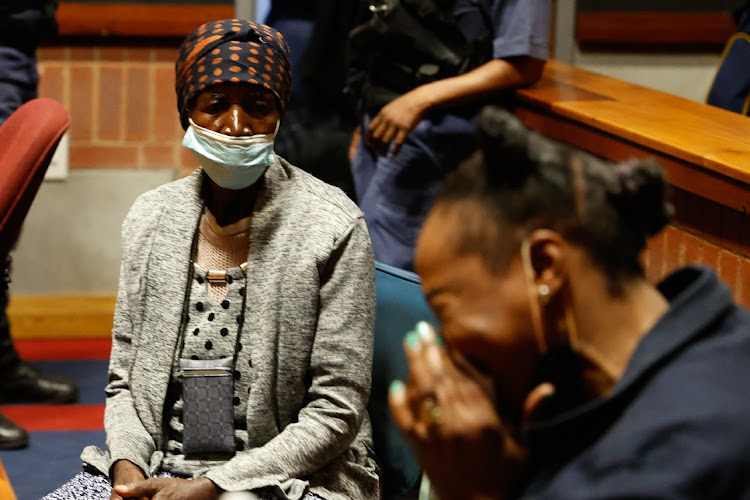 Maria Mushwana, the mother of former police officer Nomia Rosemary Ndlovu, on Thursday contradicted the alibi given by her daughter on where she was in January 2018 at the time of Brilliant Mashego’s death.

Mashego was Mushwana’s grandson and had been born to Audrey Ndlovu — her daughter who was found murdered in Thembisa in June 2013.

Taking the stand, Mushwana denied that her daughter had been around Bushbuckridge at all on the days leading to Mashego’s death.

“No, she was not in Bushbuckridge. She was in Johannesburg,” Mushwana told the court.

Nomia Rosemary Ndlovu faces a string of charges, including that she attempted to have her mother murdered
News
1 month ago

This contradicted the evidence that Ndlovu had given just a day earlier when she was on the stand.

Ndlovu told the court that she had seen Mashego in Bushbuckridge and the pair had met at a shopping complex near a taxi rank.

A day later, however, she was called by Mashego, saying he needed money to go back home, Ndlovu alleged. She told the court he said he was uncomfortable at his friends’ place.

“I received a call from him from a number I didn’t know. He told me he was in Vusimuzi section [in Thembisa] at his friends' place. He told me he needed to go back to Bushbuckridge and he had no money. He said where he was, he was not safe. I asked him if he knew where Esangweni section is. If not, he should ask around. I told him to go there and wait for me there,” said Ndlovu.

“We took a taxi that dropped us off at Germiston. Because it was during the day, almost afternoon, I thought we would not be able to find a taxi to Bushbuckridge in Thembisa, but even late in the evening one could find taxis to Bush from Germiston,” she said.

She claimed they arrived there at around 9 or 10pm.

Their ride had dropped them off in an area known as Dwarsloop at the Engen garage.

“Before we parted ways, I asked him, since it was late, where would he sleep. He said I should not worry as he was familiar with the place. I suggested he come to New Forest (where Ndlovu’s mother lived) but he said no, he would sleep at his paternal grandmother’s home),” said Ndlovu.

But, despite being a short distance from her own home, Ndlovu said it was not her plan to go to her mother’s place.

“I had transport to head back to Johannesburg. A boyfriend of mine at the time was working, doing deliveries and on that day, he was meant to drive back to Joburg so he was to give me a lift back,” said Ndlovu.

She added that the only reason she had agreed to meet up and travel back with Mashego that day was because she had an appointment with her boyfriend.

“So it happened to be a coincidence that we were both heading there,” Ndlovu said.

Mashego however, never made it home.

His body was found dumped at a market place in Dwarsloop.

Ndlovu’s mother, however, had no knowledge that her daughter was anywhere near her late grandson around the time of his death.

“No, she did not come home on those days. She only came the day before Brilliant’s funeral,” Mushwana said.

Ndlovu’s evidence was crucial because a cellphone expert who had been called by the state had placed her phone in the same vicinity as Brilliant’s around the time of his death. Their cellphones had pinged several of the same towers on the days around Mashego’s death.

Meanwhile, Mushwana told the court that on January 22, she had seen Mashego.

He had come to her residence and informed her that he would not be around for a day or two as he was heading to Nelspruit.

Mushwana said Brilliant did not say anything about having plans to meet her daughter, Ndlovu, on that day.

The court has heard evidence that Mashego usually took calls from Ndlovu in secret. His cousins, who lived with him at his paternal grandmother’s house, told the court that Ndlovu would instruct him to move if he was near people so that they could talk.

It is the state’s evidence that Mashego had found out that Ndlovu had cashed in over R717,000 in life and funeral policies after the death of his mother, Audrey Somisa Ndlovu in June 2013.

It was alleged that he had wanted Ndlovu to also provide him with some money. But Ndlovu had promised to help him secure a job.

While on the stand on Thursday, Ndlovu admitted she had insured Brilliant too. But, she never claimed these policies.

Ndlovu is accused of  murdering her sister Audrey, the latter's son Brilliant, her lover and three other relatives.

She also stands accused of trying to kill her sister Joyce Ndlovu and her seven children, her niece Gladys and her mother.

It was alleged that she was plotting and carrying out these murders to cash in on policies.

Taking to the stand however, Ndlovu’s mother told the court that she did not believe her daughter had tried to kill her. This evidence had been given by Lakhiwe Mkhize, a hitman who claimed Ndlovu had paid him R2,600 to kill her. He claimed that he went to her house, saw the elderly woman, asked for water and left. He said he could not go through with the killing.

Commenting on this, Mushwana said: “I never felt bad about it because I was never threatened by anyone at my place.”

So rocky was their relationship, he resorted at times to sleeping in his car.
News
1 month ago

The former police officer accused of murdering and plotting to kill relatives for life insurance has been described as a "generous" gambler who often ...
News
1 month ago

When former police officer Nomia Rosemary Ndlovu took to the stand for the first time on Tuesday, Zanele Motha’s partner was sitting in the court ...
News
1 month ago