'They waited years for those children': neighbour and colleague speak after woman charged with NZ murders 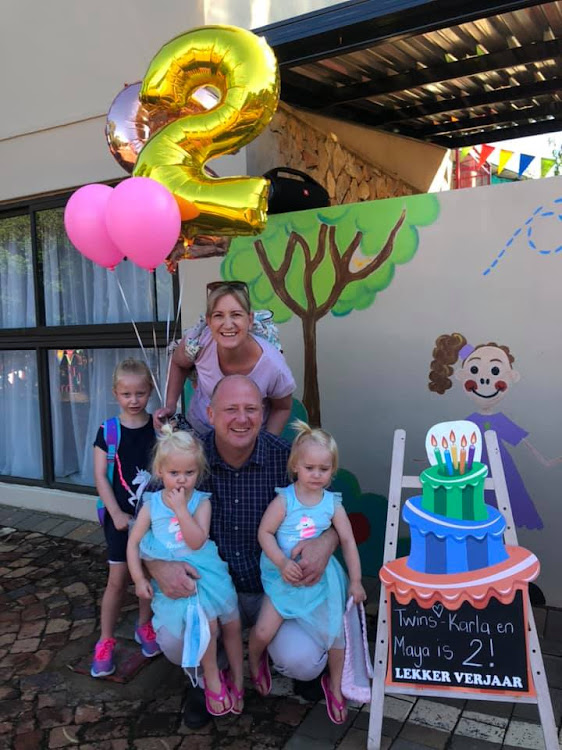 South Africans who knew orthopaedic surgeon Graham Dickason and his wife, Lauren, a doctor in the same field of medicine, are reeling at the deaths of the couple's three daughters in New Zealand.

Police in country confirmed that a 40-year-old woman had been arrested for the murder - and while they didn't immediately identify her, Stuff news agency said she was the girls' mother, Lauren.

The woman is due to appear in court on Saturday on charges of murdering twins Karla and Maya, 2, and their six-year-old sister, Liane.

The children were found dead in their new home by their father on Thursday night when he returned from work. Police said that a woman was also found at the Queen Street, Timaru, property, before she was taken to hospital in a stable condition.

In two statements, police said that “nobody else” was being sought in relation to the deaths of the three children.

“Police would like to reassure the community that this was a tragic isolated incident and we are not seeking anyone else,” one statement read.

“The investigation into this tragedy is still in its very early stages, but we can confirm that nobody else is being sought in relation to the deaths of the three children,” an earlier statement read.

The family had left Pretoria at the end of August to work at a hospital in New Zealand. They had been in the town of Timaru for about a week after first being quarantined elsewhere under Covid-19 regulations.

Lauren has been described as a very soft, introverted person.

“I cannot comprehend what happened - she is a medical doctor and she wasn’t arrogant or anything like that. She was very humble,” said former colleague and neighbour, Natasja le Roux.

The nicest person it could happen to is that woman.

She  said the couple struggled to conceive their children.

“They waited years for those children because she had troubles with fertility and stuff, so it really is a big shock,” she said.

She said Lauren had a lot of support when she was in SA.

“The nicest person it could happen to is that woman; she was really just a nice person, she and her husband,” said Le Roux.

A neighbour who lived in the same area as the couple said they adored their children.

“They absolutely adored those children. They were so grateful for having them because they struggled to get pregnant and when they finally got the children, they loved them,” she said.

The neighbour, who didn't want to be named, described Lauren as a lovely person.

“Something just doesn’t seem right to us. We don’t know what happened. There is not a lot of information, but they are kind people.

“Something just doesn’t add up. I don’t know if it’s the stress from New Zealand, moving there, being quarantined for so long and everything - just not coping with that going on. So I think whatever happened is not normal, it wasn’t normal circumstances,” the neighbour said.

Stuff quoted Lauren's parents, Wendy and Malcolm Fawkes, as saying they were “devastated” at the tragic event.

“The extended families are in a state of shock as we try to understand what happened. We ask for your prayers and support during this very difficult time. We would also request privacy as we battle to come to terms with what has happened,” they said.

In SA, department of international relations and co-operation spokesperson Lunga Ngqengelele told TimesLIVE the department has been made aware of the incident.

“We aren’t in a position to say more as the investigations are ongoing,” said Ngqengelele.

Police in New Zealand have arrested and charged a 40-year-old woman with murder in relation to the deaths of three children.
News
10 months ago

“I never saw any fight in that family or anything. There was nothing wrong,” says caregiver Maria Mandy Sibanyoni.
News
10 months ago

Their father, a doctor, arrived home to find his daughters dead, and was heard screaming and crying, saying “Is this really happening?”
News
11 months ago