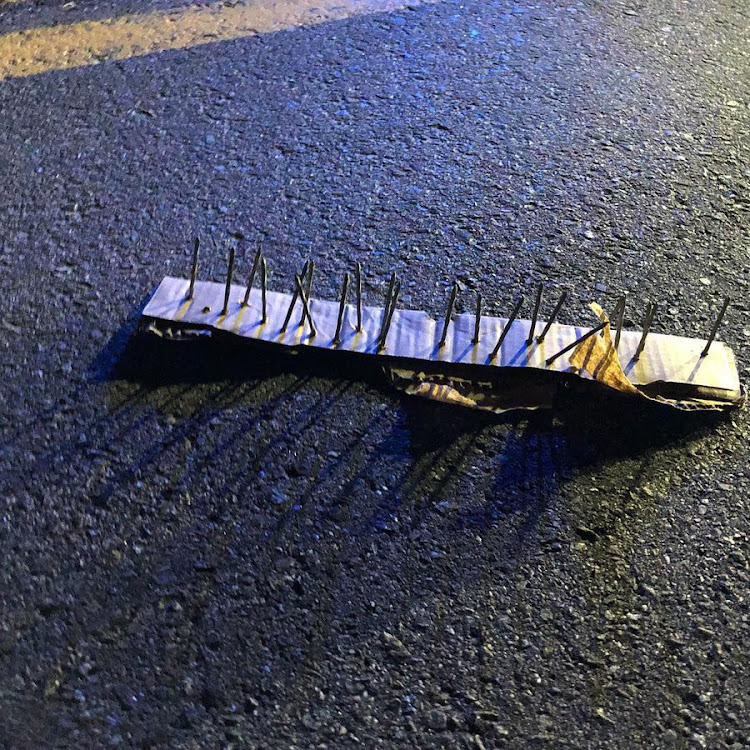 Police have warned motorists to be vigilant after three men attacked a family whose car had stopped after a tyre was punctured.
Image: SAPS

A motorist shot dead a suspect after he and his family came under attack by the notorious Gauteng road spike robbers.

Police are warning motorists to be extra careful and vigilant on the province’s roads as the robbers move locations whenever law enforcement increases visibility at  hotspots.

In the latest incident, police spokesperson Lt-Col Mavela Masondo said three armed men attacked the family whose car had stopped after a tyre was punctured at about 9pm on Friday.

They were driving on the R80 highway in Akasia when they hit what they suspected to be spikes placed on the road.

“While the driver was changing the tyre, with his wife standing on the side, they were attacked by three armed men who fired shots at them.

“The husband fired back and one suspect was hit on the upper body while the other two fled on foot.”

Members of Flying Squad responded and found a replica firearm at the scene, next to the shot suspect who was later certified dead by paramedics.

Masondo said: “Police have launched a manhunt for the suspects who escaped from the scene and are warning motorists driving on the R80 highway to be cautious, especially when driving at night."

“Police have stabilised incidents of car spiking on Gauteng roads that were on the increase, especially on the N4 highway and the R566. Crime pattern analysis showed that as soon identified hotspots are mitigated with increased visibility of law enforcement and security partners, criminals either change their modus operandi or move to another location.

“If motorists suspect their tyre punctures are as a result of driving over spikes, they must immediately call the police emergency number 10111, scan their immediate environment and by stay vigilant while changing the tyre. If they feel unsafe, they must try to drive to the nearest filling station or police station.”

Masondo said 14 suspects who were arrested in October last year after robbing people on the R80 and surroundings remain in custody. Their trials are expected to start between September and December this year.

Motorists making use of the N1 and R101 roads between Polokwane and Kranskop Toll Plaza are cautioned to be vigilant of criminals placing spikes on ...
News
3 months ago

A Netcare 911 crew was robbed at gunpoint when the ambulance they were travelling in was spiked on the N1 northbound near Hammanskraal on Thursday ...
News
4 months ago

More police officers, particularly from the flying squad, have been deployed to patrol the N4, R104 and R513 routes from 6pm to 6am, said community ...
News
5 months ago