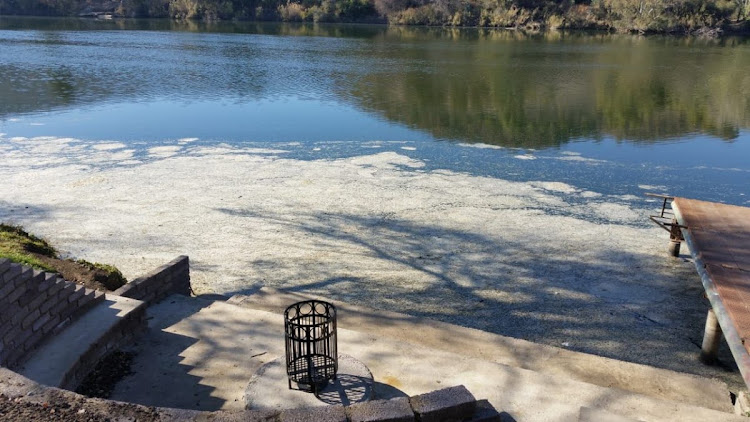 Raw sewage has plagued the Vaal River for many years.
Image: Supplied

Water and sanitation minister Senzo Mchunu has apologised to communities depending on the Vaal river for government’s inability to solve the pollution problems plaguing the key waterway.

“This time’s for real” was the message behind Mchunu’s words on Tuesday after a weeklong briefing on issues in Gauteng and Tuesday’s visit to the Vaal waste water treatment plants.

For years broken infrastructure has seen millions of litres of raw sewage spill into the Vaal river unabated. Vandalism of critical infrastructure and a dysfunctional  municipality within the area have compounded the problem.

Since 2018, efforts to fix the wastewater problem have fallen to Rand Water, the military and the Ekurhuleni Water Care Company. Earlier this year the Human Rights Commission reported the Vaal Dam is polluted beyond acceptable standards.

The Loch section is down river from Rietspruit and Sebokeng, some of the most polluted parts of the river. The latest ecoli reading in this area, taken weekly on a Friday, stood at 866 counts per 100ml. Ecoli counts over 400 can put you in hospital as there is a high risk of gastrointestinal disorders.

Mchunu described seeing dead fish and animals floating on the stinking river, which flows all the way to the Northern Cape as a valuable water source for more than 19-million people.

The delegates visited the Rietspruit wastewater plant and pump stations 9 and 10 in Sharpeville, where progress is being made in clearing the sludge which prevents it from working.

The department of water & sanitation has invested R100m towards phase one of the Sebokeng bulk water waste treatment project. Makhura said the Gauteng government has invested R200m in the project.

“Focus needs to be placed at the source, which means fixing the infrastructure, and a significant amount of money will be spent at the Sebokeng waste water treatment plant. There are four areas needing intervention, including the the pump stations,” Mchunu said.

“These all have an impact on sewage spilling into homes, rivers and dams.

“Water is a basic right and we have the political will to ensure we live up to the expectations of the people. This project will not stop until it is completed. It won’t stop for weather, it won’t stop because of money.”

The delegation then convened at a hotel where local interested parties took their pleas to the officials. Local organisations had similar queries and requests: Infrastructure needs to be repaired; the waste water treatment area should become a national key point to prevent stealing; and government needs to use locals to fix the issues.

Mchunu said the Gauteng department of water & sanitation needed to hold a meeting and report back within two weeks with their ideas to produce a benchmark document on the Vaal.

Regarding the army’s work at the Vaal river he said: “It is no small feat that the country’s army is defeated by sewage. We must be feeling very small. The main duty of the army is to shoot the enemy and not to look after sewage.”

We destroyed the prospect of economic growth and jobs. No economy can grow from sewage

On the stealing of infrastructure, Mchunu said the community must also assume responsibility because the infrastructure belonged to them.

“These nyope guys — the nation has 59-million people and we can’t deal with people using nyope — we can’t make progress because of nyope people. What kind of community is this? Even if they come armed it doesn’t matter. We need to demonstrate once, but it must come from you [the community] otherwise if anything happens to the project and you were there, you will be held accountable.”

He said there were two reasons for visiting on Tuesday, and the first was “to confess our sins”:

Mchunu said: “I don’t appreciate the failure that we did not attend all meetings and trips in the past. We have to do something about it.

“This has diminished accountability and this department in particular is projected as having little accountability, especially on constitutional matters.

“We must feel small as we haven’t lived up to our accountability and we apologise. We must look you in eye and say we shouldn’t have done things how we did them in the past. We could have done better.

“We are here to show that we commit to fix what is broken and repent. We need to repent and become new.”

He said the project required ethical, quality leadership which was not selfish or decay would set in.

He called for a stakeholder steering committee which included all concerned parties to report back to the ministry and oversee progress.

The appointed entity, Rand Water, would fix the issues at the Emfuleni treatment works, said Mchunu.

“Rand Water will fix. Finish and klaar. But we are also making sure we develop a mechanism ensuring we don’t have to come back here.  If this means we need to look beyond Emfuleni we will have to do that.”

He said the job needed money and that would come from the premier, the mayor, Emfuleni and National Treasury.

Mchunu said fixing the sewer works had started. Once completed the mission would be to clean the river.

Makhura said reinvesting in the infrastructure and cleaning up the spillage was central to the regeneration of the economy of the Vaal.

“If we can’t get this right, then we can't get anything right.

“The Vaal is where industry in Gauteng started. The cost of pollution on the economy is more than it costs to fix it.

“Stakeholders, you think we will just talk and make very little progress. But we have plans to make the Vaal a special economic zone. But we can’t do this unless we get the water and sanitation fixed. I am confident this time.”

He said 21 main roads in the Vaal had been fixed and 30 refuse trucks had been delivered to the municipality. Besides water and sanitation, the issue of electricity and energy was a serious problem.

“Crimes pertaining to infrastructure are treasonous, but that can only be dealt with by police.”

He said his department would fix the economic infrastructure and the DWS must fix the water and sanitation issues.

“You are citizen number one,” Mchunu told Makhura, “and that comes with a responsibility.

“Water is your problem and we invite you to get on board because you have a political mandate to the people of this area.”

The minister will begin his KwaZulu-Natal inspection on Wednesday.

What stakeholders had to say:

Bophelong Water and Sanitation Forum asked for a R3,500 stipend so its volunteers could receive payment for their hard work. The forum was donated Jojo tanks which they allocated to schools and taxi associations because “those places have security”

Mchunu said he would ask Treasury for the money.

Golden Triangle Chamber of Commerce said the Sedibeng area had a 70% unemployment rate with residents living in “inhumane conditions” surrounded by flowing sewage.

“It is a ticking time bomb because the community are tired.”

They were concerned there was no communication from the DWS and R11m had been spent on securing the sites but infrastructure was still being stolen.

AfriForum called the Vaal a disaster area and said they were concerned there had been no accountability for failure to fix infrastructure.

“There is a lack of accountability and a ‘don’t care’ attitude. Government needs to establish a partnership with the private sector to maximise their efforts. National and provincial government needs to assist from ground level.”

Federation for Sustainable Environment highlighted the issues of mining pollutants in the area.

“The challenge is that the current framework allows mines to circumvent closure duties [rehabilitation of the area when the mine closes].”

The SA National Civic Organisations said pollution of the Vaal threatens community  identity and their heritage. They said the river feeds 40% of industries in SA.

“It’s a national crisis, not only a crisis for Emfuleni. There has never been stakeholder mapping done and there has been no change for people living in Everton, Bophelong, Sharpeville, Palm Springs, Vereeniging and Vanderbijlpark.

“We were promised the networks would be declared national key points. If there is no security we can’t continue upgrading the system.”

They said the Free State, Mpumalanga and North West premiers also needed to come to the party as the Vaal is polluted beyond Emfuleni.

The Vaal Intervention Project Steering Community said cadre employment, “selfish and greedy leaders” and incompetent officials had been allowed to work on the Vaal. They asked government to use those trained in the War on Leaks project to help as 80% of  water in Emfuleni was lost to leaks.

The Umkhonto we Sizwe Military Veterans Association said it was concerned about abuse of its members as around 100 security guards had not been paid for work they did last year.

“Urgent intervention is needed to get what is due to them.”

The DWS team assured them: “Nobody will be left behind.”

Gauteng premier David Makhura says Tshwane is a hotspot when it comes to water problems in the province.
News
3 months ago

For more than a month, wheelchair-bound Mampe Ramaele has been unable to leave her home in Boipatong because sewage overflowing from a nearby manhole ...
News
3 months ago

The city has a water infrastructure backlog of about R20.4bn, according to water utility Johannesburg Water.
News
4 months ago