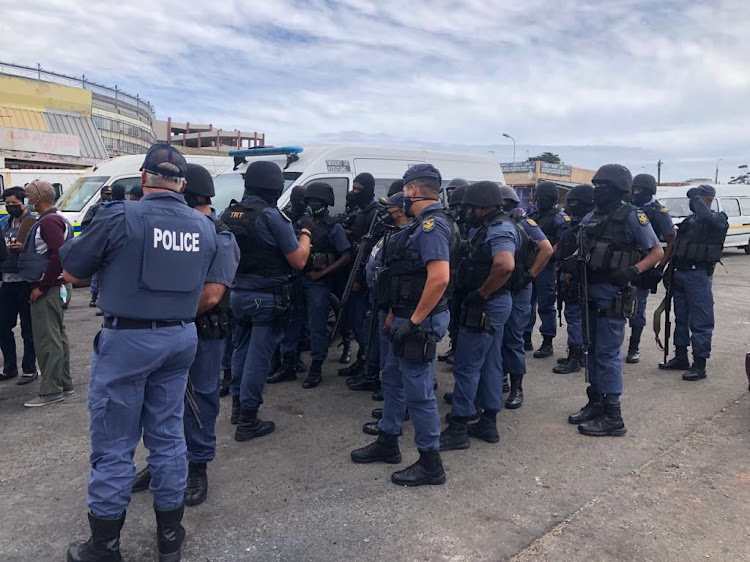 Police arrive in Gqeberha to track down arsonists responsible for the destruction of property that took place on Wednesday.
Image: SAPS

He said the Eastern Cape police would continue to use all available resources at their disposal to track down and bring to book the arsonists responsible for the “wanton destruction of property”.

This after violence broke out in Korsten, stemming from a motor vehicle accident between a taxi and a sedan believed to belong to a local businessman.

Investigations show the incident led to the torching of several vehicles and property.

“We have gun laws in this country and we abide by them. The law is clear that you cannot carry and brandish a firearm in public — we are not at war - if you do so, you are breaking the law. I’m encouraged that police continue to seek the licences of these weapons and subject them to ballistic testing to see if they have been used in the commission of any crime,” Cele said.

He and deputy minister of police Cassel Mathale, deputy national commissioner responsible for policing, Lt-Gen Fannie Masemola, and senior management of the SA Police Service visited the area on Thursday.

On Wednesday, alleged retaliation between the local businessmen and taxi drivers ensued and resulted in the damage of 12 vehicles, including eight taxis which were set alight while parked inside the taxi rank. Vendor stalls set up in the local taxi rank were also not spared while three shops were set alight.

Top brass met with leaders of the concerned groupings involved in the violence and destruction.

According to a police report: “While they differed on the exact details of how the events unfolded, all parties agreed to foster a dialogue to ensure the tensions between the taxi industry and the local businesspeople, who are mostly Somali nationals, don’t escalate further.”

Cele has praised the efforts by both groupings to find a peaceful solution but has warned that arson is a very serious offence that will not go unpunished.

“While you negotiate with each other, the police won’t negotiate crime, they have a constitutional mandate to uphold which is to safeguard citizens and their property. This is why police are exploring all avenues to find and bring to account those who burnt down a taxi, a vending stall or a shop.”

The ministry welcomed the steps taken by the SAPS to deploy more officers to the area to ensure stability, as well as the deployment of more officers as force multipliers to the Walmer area in the province, which has seen a spate of murders believed to be related to gang violence.

WATCH | Shops and more than 10 taxis torched in Gqeberha

Gunshots were fired and shops and minibus taxis set alight, causing pandemonium on Durban Road in Korsten on Wednesday afternoon.
News
3 months ago

MAKHUDU SEFARA | Walk the talk, Cele, or there’ll be another Gqeberha

The police minister talked tough after foreigners reduced Korsten to a mini Mogadishu, but it’s not good enough
Opinion & Analysis
3 months ago