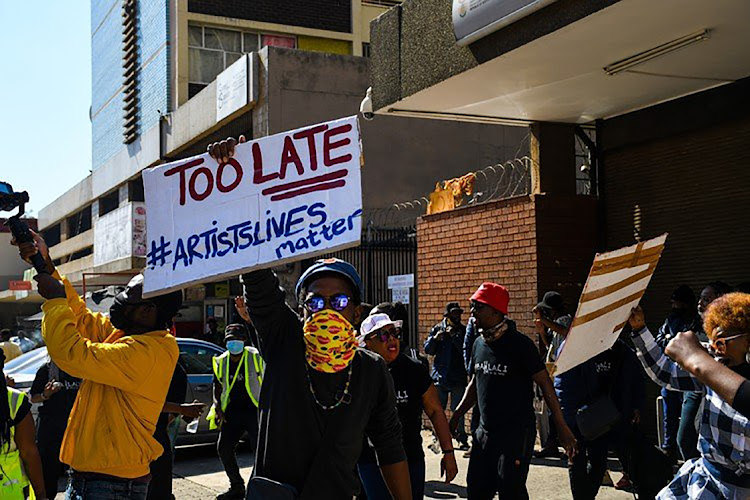 Artists protested outside the Department of Sports, Arts and Culture in Pretoria recently to hand over a memo of demands. These included making available the PESP report.
Image: Julia Evans/GROUND UP

While no funds are missing from the artists' Covid-19 relief fund, there was a lack of oversight resulting in an over-commitment of R428m — double the available funds — and a conflict of interest among some former members of the National Arts Council.

This is contained in a forensic report on the implementation of the Presidential Employment Stimulus Programme (PESP) by the council.

Artists have staged several protests demanding to know the outcome of the forensic investigation.

According to a statement by the NAC released late on Saturday night, the delay in releasing the report was due to “critically considering” what was in the public interest, while ensuring the release did not violate parties affected by the investigation.

The council's CEO Rosemary Mangope and CFO Clifton Changfoot were suspended in March pending an investigation into the management of the funds.

Without elaborating on the details, the weekend statement said: “The CEO and CFO have been charged.”

Some of the findings revealed in the report are that there were:

The report confirmed that all funds have been accounted for at the NAC.

Newly appointed council members (from January 1) were all cleared of any wrongdoing.

In addition, the report confirmed the findings of the state law attorneys stating that newly appointed council members whose organisations had applied for the PESP could not have been conflicted as they had not commenced their appointment at the NAC at the time of applying and completion of adjudication.

The report comes after a media briefing held by the minister of sport, arts and culture, Nathi Mthethwa, and NAC chairperson Princess Celenhle Dlamini on September 27 where they announced the preliminary findings of the report.

'It was a rape of the psyche, an attempt to silence me': Sibongile Mngoma on having shirt ripped off by police

'Like a group of gang rapists, the men who brutalised me wanted me to feel shame when what they did was shameful,' says singer Sibongile Mngoma about ...
News
3 weeks ago

Saturday's statement said the NAC has taken the findings in the forensic report “seriously and are committed to ensuring that all resources required are allocated to restoring strong internal processes and controls, capacitating council members to effectively discharge their fiduciary duties and ensuring the promotion of good governance within the organisation. This is so the entity is never faced with this type of maladministration again.

“Since the media briefing, the NAC and the DSAC, have been inundated with requests from various industry formations, including those mentioned in the report, for it to be released to the public and to those implicated in the findings ... After seeking legal advice, the NAC resolved to release the report to the public.

“Due consideration has been taken to ensure that those mentioned in the report are informed of the process that the NAC is undertaking prior to its release.

“The release of the report to the public is preceding the official commencement of the implementation of the recommendations as contained in the report. The CEO and CFO have been charged.”

The NAC said it will provide updates on the implementation of the recommendations of the forensic report, “where necessary”.

“Until such time that the NAC has completed its action on the recommendations, we appeal to those who may have an interest in the outcome and the execution of the recommendations to please allow the NAC to implement and complete the process without excessive interference.”

Singer’s blouse ripped off as artists clash with police

Artists were dragged to clear the way for vehicles at the entrance to sports, arts and culture minister Nathi Mthethwa's Pretoria offices on Tuesday.
News
1 month ago

R11bn more allocated to presidential employment stimulus — How do you rate what’s been achieved to date?

More than 550,00 young people have benefited from the stimulus package, more than 390,000 jobs have been created and more than 40,000 retained
News
1 month ago

The woeful trifecta of acronyms that has compounded, not relieved, the suffering of South African artists during Covid-19
Lifestyle
5 months ago