No graves for the dead in eThekwini

A shortage of burial plots and viable land for new cemeteries has been worsened by the pandemic’s death toll, forcing people to buy rural land on which to bury their loved ones. 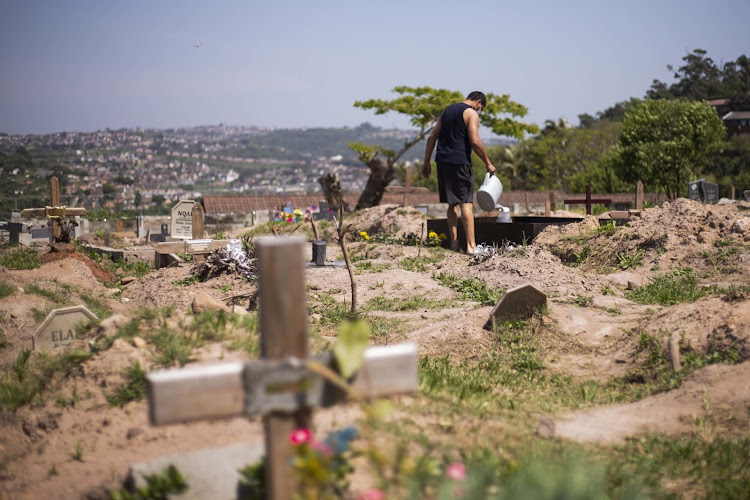 Antonio O’Reilly waters plants on his mother-in-law’s grave at Durban's Queensburgh Cemetery, which has run out of space.
Image: Rogan Ward / New Frame

Covid-19’s death toll has worsened already dire grave shortages in Durban and some other parts of the country. The eThekwini municipality insists the situation is not yet critical but will soon be, which is why it is urging people to consider different forms of burial.

Almost 90,000 people have died because of Covid-19 in SA since March last year.

In April 2019, long before the coronavirus hit our shores, Thembinkosi Ngcobo, former head of parks, recreation and culture in the eThekwini municipality, asked residents and communities to consider other options as the municipality was not able to meet the growing demand for burial space. He said the area had 65 graveyards, which contained 550,000 graves; each site held an average of three bodies, which amounted to 1.4 million graves.

“The majority of these cemeteries are filled to capacity,” Ngcobo said.

During the height of the second wave of Covid-19 infections in January, staff members at the Queensburgh Cemetery, 16.5km from Durban’s centre, were burying Covid-19 victims as fast as was humanly possible. Now it is filled to capacity and does not take any new bookings, say the staff.

St Wendolins Mission, a township 23km west of Durban, has three cemeteries, all of which are now full. Some families have resorted to burying their loved ones illegally under the road in the middle of the cemetery at one of them.

The Luganda Cemetery, about 31km outside Durban, is quickly filling up. Gravediggers there say it will be filled to capacity “within the next few months”.

Msawakhe Mayisela, spokesperson for eThekwini municipality, says Covid-19 has had a devastating effect on the city’s burial capacity.

“The city has been burying more than 3,000 bodies per month as compared to 700 that we used to bury in normal circumstances. But having said that, the city has the situation under control to this point,” he says, adding that “no gravesite request has ever been turned away”. 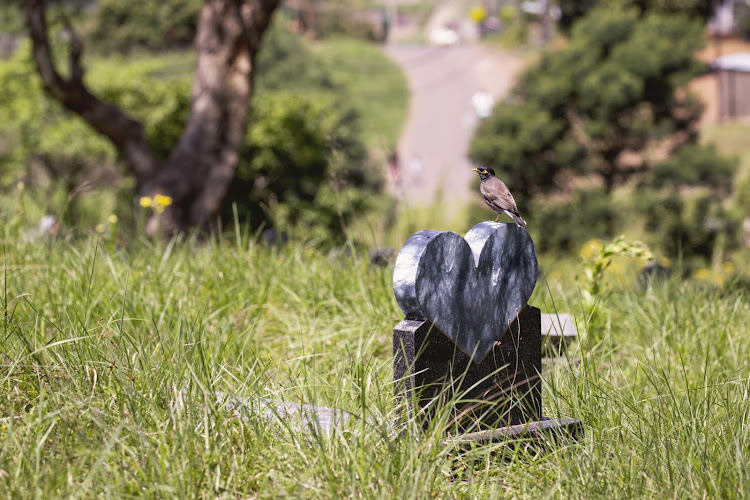 People no longer able to use the cemetery at St Wendolins Mission are buying rural land to use as burial grounds.
Image: Rogan Ward / New Frame

Mayisela says the city is working on a five-point plan to reduce the shortage of grave space and this includes identifying land that can be used for new cemeteries. He acknowledges that communities have been reluctant to consider other methods of disposing of bodies.

“There is a consistent effort by the municipality to create awareness or to educate the public about the sustainable methods in dealing with disposal of human remains ... however, the city does not impose any on its customers as the municipality is clearly aware that it serves communities with different religious and cultural beliefs, norms and standards.”

The funeral service industry says there is little it can do to help. Lenny Reddy, a director at Wyebank Funeral Services, says the shortage of cemeteries in Durban and the surrounding areas has been a cause for concern for several years now and Covid-19 has made it worse.

“We have been urging the eThekwini municipality to prioritise this issue. Our worries are that the fourth wave will again hit us very hard.”

Reddy says most of the funeral service’s African clients do not consider cremation, “except for one or two. The community is very hesitant to cremate their loved ones. They often say they have to do some ritual and prayers after burial and consider a traditional grave a sacred place.”

Health MEC Nomakhosazana Meth says she is happy with the continued decline in the number of active Covid-19 cases in the Eastern Cape.
News
3 weeks ago

Wiseman Cele, director of Musawenkosi Funerals Services in Isipingo, south of Durban, says the scarce burial space has prompted some urban-based clients to seek plots in rural areas, where municipal bylaws don’t prevent people from burying their loved ones in their yards.

“We had situations where our mortuaries kept bodies for weeks on end as families tried to get burial spaces within municipal graves. Sometimes families are forced to plead with their relatives in deep rural areas for a space,” says Cele. “This is not always easy because the family must consult Amakhosi and izinduna for approval. Amakhosi and izinduna ask many questions because the deceased was not known to them. Sometimes families have to ‘pay something’ to ease the process.”

He adds that transporting family members to rural areas increases the cost of burial, which is already expensive. “This matter of shortage of burial space needs to be addressed urgently, especially now that we all have to observe Covid-19 regulations, where travelling needs to be kept at a minimum and there is a certain limit to those who can attend funerals,” Cele says.

Zoze Mdabe, an induna in Tafelkop, says there has been an increase in people who come to Tafelkop, Engonyameni, Umbumbulu and the surrounding areas looking for a place to build houses. He says many of these new homeowners are building homes so they can have a burial space in their yards for themselves and their families.

“This has become so common that we as izinduna, community members and councillors have to welcome three or four new members of the community. Some will come and build two rooms just to secure the place, so that when they die their bodies will be buried in peace ... unlike those who are buried in Luganda Cemeteries and others where graves are mixed and vandalised by people coming to bury in neighbouring graves. If you bury your loved ones in these graves, within two weeks you can’t identify where they are buried,” says Mdabe.

A change in burial practices

The South African Cemeteries Association (Saca) is a non-profit organisation registered with the department of social development. Its executive committee is made up of officials responsible for cemeteries throughout SA.

Saca has been creating awareness about the shortage of grave sites and encouraging South Africans to consider environmentally friendly alternatives that use less or no space, such as cremation and the reuse of graves and cemeteries after a period of time has passed.

Pepe Dass, chairperson of Saca, says densely populated cities in SA and around the globe are finding it difficult to set aside land for cemeteries because of the high demand for land for residential and commercial development.

“The challenge is caused by the expanding population and the demand to practise the culture of burial. The Covid-19 [pandemic] has worsened the problem by creating a spike in the demand within a short time frame. Most metros [in SA] are challenged. In cities such as Durban and Cape Town, their challenge and shortages of burial space are more immediate,” he says.

Dass says South Africans will soon be forced to change their burial practices because of the shortage of space. “While cremations may not be popular at first, our research has indicated that many burial communities internationally are moving to cremations. Black people are opting for cremation, though the number may not be large now. There is a great possibility that South Africans could also, like other countries, follow this trend.”

This article was originally published by New Frame.

While no funds are missing from the artists' Covid-19 relief fund, there was a lack of oversight resulting in an over-commitment of R428m - double ...
News
3 weeks ago

One virus, two pandemics: how Europe proves the danger of anti-vaxxers

Shares tied to reopening trades from casinos to airlines surged in Asia on Monday after Pfizer said its Covid-19 pill could reduce hospitalisation ...
News
1 month ago