On Monday, Flavio Hlabangwane, 26, appeared in the Protea magistrate's court for murder after arms and legs were found in his fridge. 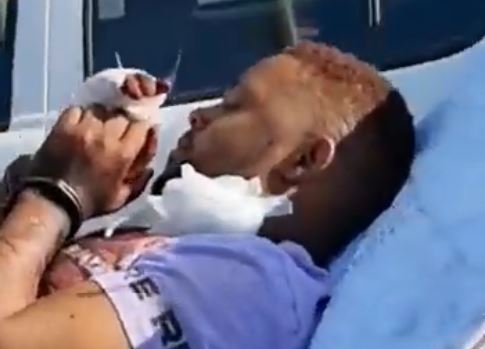 Flavio Hlabangwane, 26, was taken away from his Soweto home in an ambulance after he apparently tried to commit suicide following the alleged discovery of human body parts in his fridge.
Image: Screengrab

The owners of a Soweto home in which human body parts were found on Saturday were clearly irate on Monday after having their home surveilled and photographed by media, police and onlookers.

The couple, who did not want to be named, said they were severely traumatised by the incident and were concerned that their small children could be harmed by people who thought that they were the perpetrators of the crime.

By Monday afternoon, suspect Flavio Hlabangwane, 26, had appeared at the Protea magistrate’s court on a murder charge after arms and legs were found in his fridge. Police believe the rest of the body was burnt.

Neighbours say Hlabangwane moved into the Protea Glen Ext 28 home last year and that they don’t know much about him. They were familiar with his former girlfriend, who they described as tall and light in complexion — but said they had not seen her in a while.

The man arrested after human body parts were discovered in a fridge in Soweto, Johannesburg, at the weekend appeared in the Protea Glen magistrate’s ...
News
2 months ago

Cindi Dlamini, who lives nearby, said she did not know the woman’s name, but that Hlabangwane had allegedly confessed the body parts were hers.

“This is the last thing you’d expect in this neighbourhood. It’s quiet most days, even though we are on the main road,” she said, pointing out the neat middle class suburban landscape.

“There’s no noise here, no funny business. Just families. So I was shocked.

“On Saturday I was at home when a neighbour popped in and asked me if I knew what was going on just down the road. When I looked, there were community members outside the suspect’s home,” she said.

The suspect lives in the back of the landlord’s family home, in between two other small cottages.

According to neighbours, a woman had stayed over at the house on Friday night. The next morning Hlabangwane apparently left to buy some food. It was while he was out that the woman came across the gruesome discovery in the fridge.

“The community were the first responders. This area is home to many police officers who could help the woman.

“The girl, about 20 to 21 years old, had woken up and told him she was hungry. He said there was no food in the house and went to the shops. While he was away she looked in the fridge to see if there was anything she could eat. Instead, she saw the plastic bags.

“She opened a bag and saw a hand,” said Dlamini, recounting what had happened on Saturday.

The woman ran down the road and knocked on a stranger’s door. The man, a policeman, and his friend followed her back to the house.

“As residents gathered, the man drove into the yard. The policeman told him there was a complaint and asked about a hand inside the fridge. The man said: ‘What fridge? What are you talking about? There's nothing in the fridge.’ The policeman then went to look.

He then started stabbing his neck. Then he drinks Jeyes fluid [a strong caustic bleach used for cleaning] and vinegar.

“He tore the plastic and saw it was a hand. He came down the steps and shouted to his friend to get handcuffs from his house and shouted at another man, ‘Go down the road and try to stop any police car you see.’ So many police live in the area.”

A male neighbour, who did not want to be named, was curious and went to look inside the fridge.

“I saw an arm and there was blood. It was a shock,” he said.

As brave, or curious, community members inspected the home, the man was placed in handcuffs. He was then locked inside the house until authorities arrived.

“He then starts stabbing his neck,” Dlamini said.

“Then he drinks Jeyes fluid [a strong caustic bleach used for cleaning] and vinegar.”

The man was removed by ambulance and spent Sunday in hospital under police guard until he appeared in the Protea Glen magistrate’s court on Monday afternoon.

While TimesLIVE was speaking to neighbours, a vehicle rolled slowly past. The two men in the vehicle said they had travelled from Randfontein — 18km away — to see the suspect’s home.

Hlabangwane was remanded in custody until November 22 so he can apply to Legal Aid SA for representation.

Police spokesperson Brig Brenda Muridili said the torso and head had not been found and that police were awaiting a forensic report on the limbs for identification.

“So far there is no update on that side of investigation as the accused is also still being profiled. The case has been taken over by provincial occult-related crimes investigators but the motive for the killing is still under investigation.”

Though the landlords declined an interview with TimesLIVE, they spoke to sister publication Sowetan on Sunday.

They described Hlabangwane as quiet without many friends. They said they had not seen his former girlfriend for more than a month and that he had brought over other women since.

According to the publication, an officer on the scene said Hlabangwane had refused to disclose the location of the rest of the body, but they suspected he had burnt the torso and head. A petrol canister was found in his vehicle, as well as muddy and ash-stained shoes.

A man has been arrested after his partner discovered human body parts in a fridge at his home in Protea Glen in Soweto, Johannesburg.
News
2 months ago

Man found with human body parts in freezer stabs himself

A Johannesburg man found with human body parts in his fridge is in hospital under the watchful eye of police after stabbing himself.
News
2 months ago