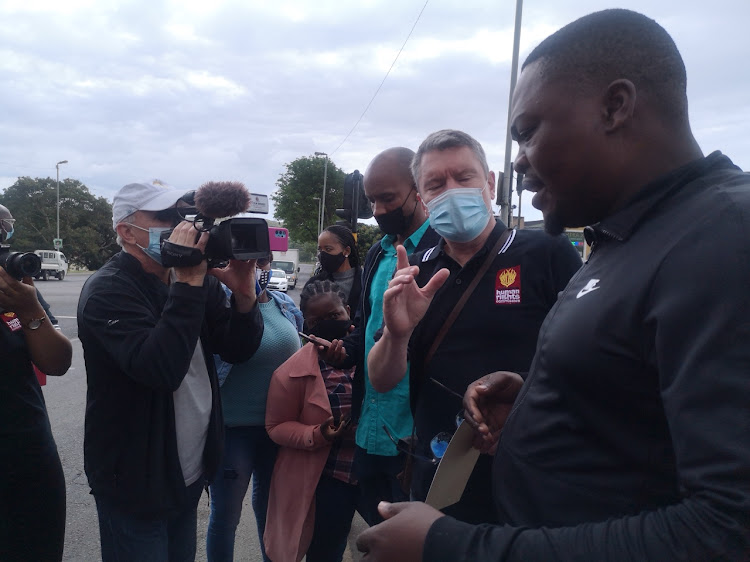 Bhambayi resident Chris Biyela accompanied a SA Human Rights Commission team on an inspection of sites in Phoenix where alleged incidents of violence played out in July.
Image: Suthentira Govender

Bhambayi resident Chris Biyela said on Friday it was painful retracing the violent events that unfolded in Phoenix during the civil unrest in July.

Biyela, who testified this week at the SA Human Rights Commission (SAHRC) investigative hearing into the unrest, led the commission’s inspection of sites in the north Durban suburb where incidents of violence played out.

On Tuesday he told the commission he narrowly escaped the wrath of an angry group of Indian people while driving through Phoenix.

The hearing in Durban is looking at the causes of the civil unrest which claimed 36 lives in Phoenix.

The July incidents of violence severely damaged relations between communities in the area, and during the height of the unrest they had received word that police minister Bheki Cele had visited the Phoenix area.

The SAHRC hearing into the July unrest in Phoenix in KwaZulu-Natal continued on Wednesday.
News
1 week ago

On Friday, accompanied by a SAHRC team and the media, Biyela pointed out several spots on the Phoenix highway where roadblocks were set up by residents.

He was appointed by police minister Bheki Cele to head a community investigation task team.

Biyela recounted during the inspection how Inanda resident Thulani Mseleku was attacked at traffic lights on the highway during the unrest.

He also took the team to traffic lights near the Phoenix police station, where he said “one of the most dangerous barricades” had been set up.

“There was shooting here. Many people ran into the police station for help.

“We don’t know exactly what happened. They were only able to open cases a few days later. Many people were injured,” he said.

Biyela told TimesLIVE outside the police station that the inspection had brought back traumatic memories.

“It’s still in my mind. I was lucky I escaped that day,” he said.

The hearing, which began on Monday, is expected to sit for three weeks. Its scope is to determine the loss of life, the targeting of retail centres, schools, transport systems and hospitals, and how the unrest worsened inequality, poverty, hunger and food insecurity.

It will also look into reports that many communities who took to the streets displayed excessive use of force, racial profiling, arson, killings, and speculation that the unrest was orchestrated.

Accounts of racial tension, assaults and killings of Africans, allegedly at the hands of Indian people in Phoenix, were aired during day 2 of the ...
News
1 week ago

A Verulam magistrate has denied bail to siblings Dylan and Ned Govender, who are accused of murdering Mondli Majola in Phoenix during the July civil ...
News
1 week ago