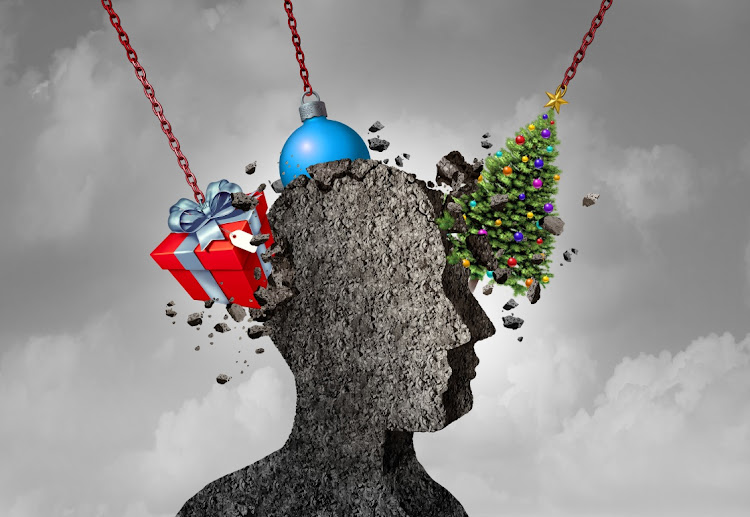 The festive season can be stressful for some people.
Image: 123RF

The image of the outsider gazing longingly at a warm circle of affection has been woven into the tapestry of modern Christmas scenes. Individuals already battling loneliness are even more isolated in a time characterised by intimacy with loved ones and families. Does this dark side of Christmas pose a higher suicide risk to those people who no longer wish to live? Is there an increase in suicides during the festive period in December, particularly around Christmas?

Even though this perception is common in many Western cultures, it appears to be stripped of any truth. Statistics show there is no real increase anywhere in the world in suicides or suicide attempts on or around Christmas Day. There is no country where research shows people are generally more despondent or likely to take their own lives when Father Christmas arrives on his sleigh — not even those battling depression or loneliness.

This fatalistic view of Christmas is mainly a Hollywood product. Even in the US suicide statistics are at their lowest in mid-December, and in industrialised countries such as Finland, Sweden, Canada, England and Wales.

In SA, a comprehensive 2020 study published in the International Journal of Environmental Research and Public Health shows a strong link between seasonal change and suicide. Epidemiologist Tahira Kootbodien researched suicides from 1997 to 2016 and found suicides are higher in summer than in winter.

Most researchers globally agree there is a clear and direct link between seasons and mood changes. These detectable mood changes increase the risk of depression, and therefore the risk of suicide attempts.

Christmas per se does not appear to be a significant influence, but we have mistakenly linked suicide tendencies to Christmas because they increase in the summer months.

Indications are that meteorological factors could be the biggest influence. Research shows factors such as temperature, hours of sunshine and radiation could play a significant role. An Austrian study supported the hypothesis that sunshine on the day of suicide and up to 10 days prior to suicide may facilitate suicide.

Scientists suspect some forms of exposure to sunlight might pose a higher risk of suicide because of the impact on certain hormones, including serotonin, melatonin and cortisol. This is of huge significance as there is a direct causal link between mood and suicide. Not everyone who battles depression will consider suicide, but nearly everyone who commits suicide wears the black cloak of depression.

THE WEEK IN POLITICS | Max du Preez says President Cyril Ramaphosa’s speech at former president FW de Klerk’s recent memorial service is a reminder why so many South Africans were excited when he became president.

THE DEVIL, EVIL AND APARTHEID | On the eve of the festive season, Piet Croucamps ponders the philosophy of evil in the context of apartheid, the history of injustice in land ownership in SA and the Dutch Reformed Church.

MEET OUR NUMBERS MAN | Stats SA is a shining light in the darkness of SA’s dysfunctional state entities. We talk to Statistician-General Risenga Maluleke about his love for numbers, what statistics he is most worried about, and if the lack of money at Stats SA will have an influence on the quality of their work.

LET BRETT BOWL YOU OVER | He doesn’t know the rules of cancel culture, says Tinus Horn, but he immediately wants to cancel Brett Lee, the Aussie bowler who was once the fastest in the world.

A GIFT FROM US | We have a festive discount for you: get 30% off on a standard monthly Vrye Weekblad subscription, and on a gift voucher for someone else.