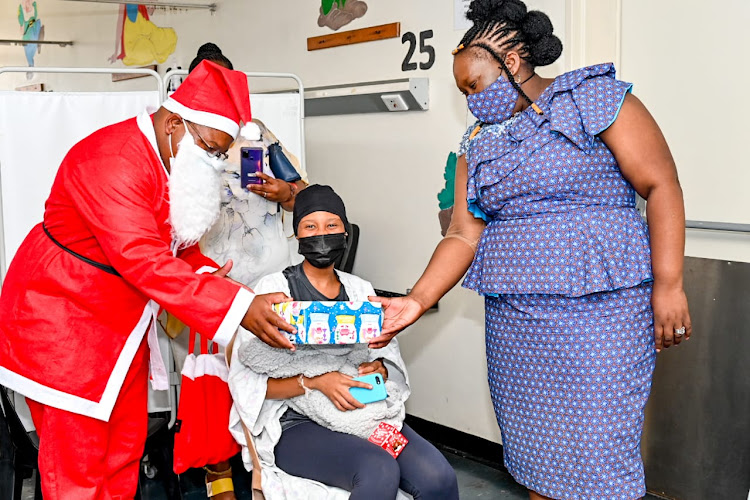 KZN health MEC Nomagugu Simelane hands over a gift to a mother who delivered a baby on Christmas Day at Addington hospital.
Image: KZN department of health

Three 14-year-old girls are among the new mothers who delivered babies in Limpopo hospitals on Christmas Day, prompting concern from the provincial health department.

Limpopo health MEC Dr Phophi Ramathuba said she was disappointed and hoped authorities will take action against those who impregnated the teens.

“You can't get consent from a 14-year-old. These young girls were raped. A 14-year-old should be playing with her peers, be in Sunday school for those who are churchgoing and also wearing her Christmas clothes and not be in a labour ward on Christmas Day,”
Ramathuba told TimesLIVE.

In Limpopo, 253 babies were born on Christmas day, 29 of them to teenagers.

“This is quite a shocking statistic. To have 29 teenagers deliver babies in a single day is just too much. We are not going anywhere as a country if things continue to go this way. we can't have children having children. 14-year-olds should be playing with their siblings and not making their parents grandparents,” Ramathuba said.

However, she said the 29 births by teenagers was a decrease from the 41 that the province recorded on Christmas Day last year.

“It's a step in the right direction, but we'll be happy in a year where we record zero teenage pregnancies,” Ramathuba said.

Almost 750 Christmas babies were born in Gauteng, KwaZulu-Natal and Limpopo. The highest number of deliveries was recorded in Gauteng, with 403 babies born on Christmas Day — 197 boys and 206 girls.

In KwaZulu-Natal, the youngest new mothers were two 16 year-olds, who gave birth at the Nkonjeni and Itshelejuba Hospitals, both in Zululand District. While health MEC Nomagugu Simelane welcomed the babies, she said she was concerned about the number of teenage pregnancies in the province.

“When you look at these cases, what becomes glaring is that these girls had sex when they were about a year younger than they are, which means girls aged 15, 16, and 17 were engaging in sexual intercourse,” Simelani said.

She said this was unacceptable because conceiving at such a young age can could be dangerous for both mother and child.

“A mother who is too young is not psychologically and physiologically ready to bear a child, and is at an increased risk of suffering health complications, and possibly losing her life and that of the baby,” she said.

She also reiterated that older men who impregnate young girls must be arrested and made to face the full might of the law, because what they are doing is statutory rape.

“They are taking advantage of girls who are economically vulnerable. So, we reiterate that the law must take its course,” she said.

Simelane also said she was disappointed to see that most of the mothers who delivered babies on Christmas day were unvaccinated.

“We must mention that out of 26 mothers who have given birth to Christmas babies in eThekwini, only one mother had been vaccinated, which is extremely concerning because vaccination is safe for pregnant mothers — but the uptake is disappointingly low. As we speak, two of these mothers are in isolation in one of our hospitals,” Nomagugu said.

In Gauteng, the Chris Hani Baragwanath Academic hospital recorded the highest number of births, with 44 births recorded by midday on Christmas day.

“It has been a difficult time since the global Covid-19 pandemic hit, having to cope with their own fears and anxieties, and still ensuring that the people of Gauteng receive the best service when visiting health facilities. Thank you for always making Christmas time cheerful and filled with love to mothers and their newborns. We wish all parents well and encourage mothers to opt for breastfeeding their babies as it is essential and has many health benefits for new borns,” Mokgethi said.

She also urged parents of newborn babies to register their births soon, through Home Affairs offices available at health facilities.

There has been mixed reaction to the basic education department's new and long-awaited policy on the prevention and management of pupil pregnancy in ...
News
5 months ago