Man arrested with hand grenade at airport in Bloemfontein 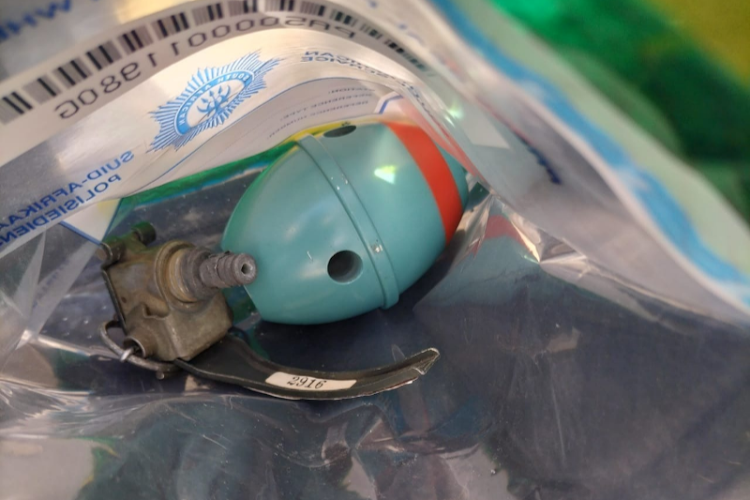 Police arrested a man who was found with this drill hand grenade in his luggage at the Bram Fischer International Airport in Bloemfontein on Monday.
Image: SAPS

Police arrested a man who was found in possession of a drill hand grenade at the Bram Fischer International Airport in Bloemfontein, causing the airport to be evacuated on Monday.

“The suspect arrived at the airport and reported at check-in-counter, where he handed over his luggage to be searched,” police spokesperson Lt-Col Thabo Covane said.

The security officer placed the passenger's bag inside the X-ray scanner, which detected the metal inside the bag. The round object was visible on the monitor.

“The police at the airport were called to the counter. An immediate decision was taken to activate the evacuation alarm because of the possibility of a threat in the terminal building.

“The bomb disposal unit were also summoned to the scene to handle the evidence and sweep the building,” Covane said.

He said the building was declared safe and operations continued as normal.

A case docket for possession of hand-grenade shell and interference with airport operations was opened against the 28-year-old man.

An advertisement for the airfield suggested the property had "numerous opportunities" such as a farm or lodge with private airstrip, game ranching, ...
Lifestyle
4 months ago

Archbishop Thabo Makgoba of Cape Town laid the ashes of Archbishop Emeritus Desmond Tutu to rest at the St George’s cathedral during a private, early ...
News
4 months ago

A New Year's Eve tip-off led to the arrest of two men, who the Hawks caught transporting more than R1m worth of drugs from Gauteng to Cape Town on ...
News
4 months ago