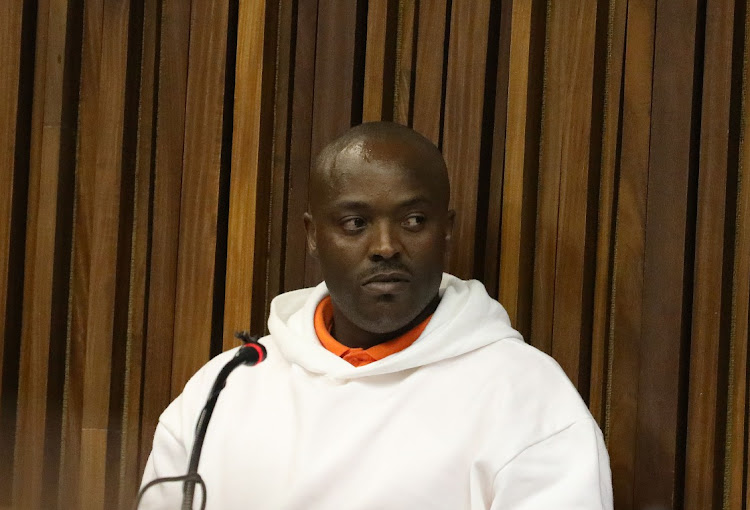 Muzikayise Malephane, who killed Tshegofatso Pule in 2020, is testifying in the trial of Ntuthuko Shoba whom he accuses of ordering the murder.
Image: Veli Nhlapo

After three days in the witness box, convicted murderer Muzikayise Malephane on Thursday finally told the court how he murdered the heavily pregnant Tshegofatso Pule.

Malephane has testified that he was hired by Pule’s on-again, off-again boyfriend, Ntuthuko Shoba, to commit the crime in June 2020. He alleged Shoba had wanted her dead to conceal the pregnancy from his wife.

Malephane told the high court in Johannesburg that he had picked Pule up from Shoba’s flat in Florida. She thought he was an Uber driver who was taking her back to her home in Meadowlands.

“Was she not surprised that you were heading to Noordgesig instead of Meadowlands?” Norman Makhubela, for Shoba, asked Malephane.

“She was surprised. She even asked. She asked me why am I not taking her home? I told her that there is something that I have to drop off,” Malephane replied.

He drove to Noordgesig and parked in an open veld next to a juvenile incarceration facility.

Convicted killer reveals new information, but insists he informed the investigating officer about it earlier
News
5 months ago

“I parked the car on the side and then got out. I had a firearm in my hand and I opened the door on Ms Pule’s side, grabbed her by her hand, and said she must get out of the car.

“And then I shot her,” Malephane said.

While he had last year confessed to murdering Pule, it was the first time that Malephane had given details into how the murder unfolded.

Pule’s relatives, who have been sitting in the courtroom since the start of the trial, broke down in tears, some leaving the courtroom.

Malephane continued: “After I shot her, I picked her up, put her back in the car on the back seat.”

Malephane had earlier testified that the plan that was hatched between himself and Shoba had involved him hanging Pule at the Maraisburg bridge near Roodepoort. Despite having shot her dead, he denied that he had deviated from the plan.

“The plan was for you to hang her, when did it suddenly change?” Makhubela asked.

“The plan did not change because afterwards, I headed to Durban Deep where I hung her,” Malephane said.

The eight months pregnant Pule was found dead, her body hanging from a tree.

Shoba, believed to have been the father of her unborn child, was arrested in February after being implicated by Malephane. He has pleaded not guilty to murder or conspiracy to commit murder as well as defeating the ends of justice.

LISTEN | Shoba was scared of me, so he would have paid for Pule's murder, says killer

Although convicted killer Muzikayise Malephane walked away without a cent after killing pregnant Soweto woman Tshegofatso Pule, he said he had been ...
News
5 months ago

Muzikayise Malephane, the man who killed heavily pregnant Tshegofatso Pule in June 2020 and hanged her body from a tree, has shared more details ...
News
5 months ago

Convicted murderer Muzikayise Malephane testified that Ntuthuko Shoba first offered him R7,000 before agreeing to pay R70,000 for the murder.
News
5 months ago