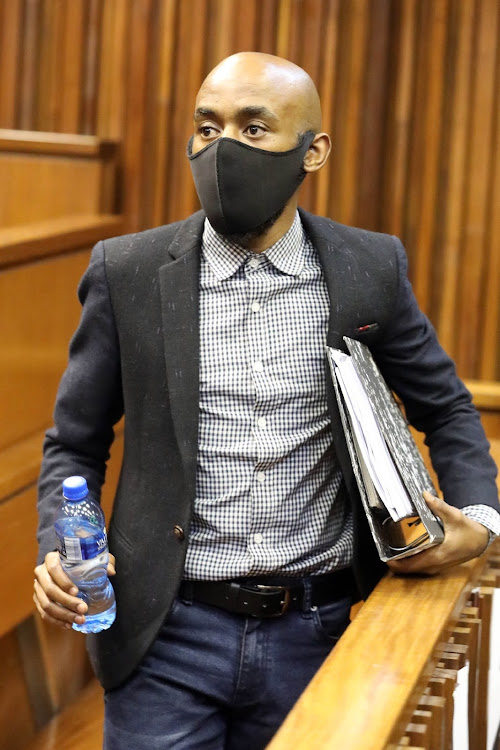 Sgt Mpe Teme said he and the investigating team had visited the accused after Pule was found dead as he was the one who was last known to be with her and his phone was taken to help with the investigation, even though he was neither arrested nor declared a suspect at the time
Image: ANTONIO MUCHAVE

The alleged mastermind in Tshegofatso Pule’s murder came under the spotlight on Wednesday regarding a charge of defeating the ends of justice, as one of the investigating officers in his case took the stand.

Sgt Mpe Teme said he and the investigating team had visited Ntuthuko Shoba after Pule was found dead as he was the person last known to be with her and his phone was taken to help with the investigation, even though he was neither arrested nor declared a suspect at the time.

Shoba is accused of having orchestrated a hit on Pule by hiring Muzikayise Malephane to kill her in June 2020. Malephane was convicted of her murder. She was eight months pregnant with Shoba’s baby at the time.

Teme told the court that when he took Shoba’s phone when the investigation started, he found he had deleted his communication with Pule as it could not be found in his SMS or WhatsApp messages.

Makhubela said it was Shoba’s version that Teme had given him the green light to do a SIM swap while his phone was in the possession of the police, which a visibly irritable Teme rejected during cross-examination.

“He never asked anyone for a green light for a SIM swap. We only noticed that there might have been a SIM swap done when we saw that the phone was no longer receiving messages,” Teme said.

Shoba is accused of having secured another phone, doing a SIM swap and retrieving his phone data and messages while his other phone was with the police, allegations which are the subject of a charge of defeating the ends of justice.

Teme said he had discovered Shoba had another phone when he came to his home to arrest him, which contained some of the messages between him and Pule that are now part of evidence in the trial.

“I asked him to give me the phone for investigation,” he said.

Makhubela also came under criticism from the state for repeated requests for postponement of trial proceedings.

This after Makhubela said he was not ready to cross-examine witnesses who testified on the cellphone records relating to Shoba’s unregistered number.

On Tuesday, Makhubela questioned evidence given by police communication analyst and forensic cellphone examiner Andries van Tonder on the cellphone records and asked for a day’s postponement to prepare to cross-examine him.

On Wednesday, the state brought Vodacom’s forensic liaison manager Petro Heyneke to the stand to corroborate some of Van Tonder’s evidence and give further details on the inner workings of cellphone towers, their radiuses and how they picked up signals from the devices involved in the case.

Makhubela asked for proceedings to be postponed as he wanted to once again prepare to question Heyneke, which prompted complaints from state prosecutor Faghre Mohammed.

“Already during Mr Van Tonder’s testimony, a specific version was put to him and it appears that Mr Makhubela will use this direction as he is doing now and decide what his version is. I just find it ironic that at this stage he is still not prepared to proceed with cross-examination,” Mohammed said.

Acting judge Stuart Wilson, however, called for lenience as he said Heyneke’s evidence was new and Makhubela’s request for time to prepare was reasonable.

Warrant officer Andries van Tonder returned to the stand on Tuesday to testify on cellphone records in relation to June 4 2020, when Tshegofatso Pule ...
News
3 months ago

The trial of the alleged mastermind behind the murder of Tshegofatso Pule has heard how he allegedly called her convicted killer repeatedly on the ...
News
3 months ago

Murdered Tshegofatso Pule's on-again, off-again boyfriend Ntuthuko Shoba has discounted all the evidence presented by the state’s star witness in ...
News
3 months ago