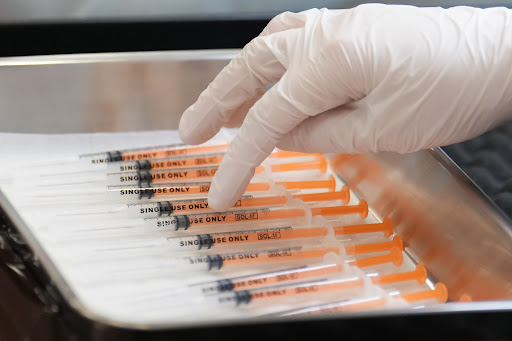 Moderna Inc’s coronavirus vaccine will be offered as a booster to some SA health workers.
Image: Bloomberg

Moderna Inc’s coronavirus vaccine will be offered as a booster to some SA health workers, who received either one or two shots of Johnson & Johnson’s inoculation as part of a vaccine trial involving almost half a million people.

The Moderna shot will be offered to 10,000 health workers in a trial known as Sherpa that is likely to start in the second half of April, Glenda Gray, the co-lead of J&J’s vaccine trials in SA and president of the SA Medical Research Council.

The aim of the study, which will target participants in the earlier Sisonke trial, is to compare how well the Moderna shot works in comparison to Pfizer Inc’s shot as a boost, Gray said in an interview on Monday. Pfizer’s inoculation is being offered as a booster by the SA government.

SA, which together with Botswana was the first country to announce the discovery of the Omicron variant in November, has seen coronavirus cases plunge but its Test positivity rate has stuck stubbornly above 5%, indicating that the virus is still circulating. Another wave of infections is expected in about May, according to Gray.

On Sunday the country tallied 989 new infections with a Test positivity rate of 5.9%.

Sherpa, which is being run by Moderna and the SAMRC, is the second vaccine trial that Moderna will undertake in SA. The Ubuntu trial stretches across eight African nations and is designed to determine the vaccine’s efficacy in people infected with the HIV virus.

How are Covid-19 and flu viruses similar?

As winter approaches, Dr Morgan Mkhatshwa, head of operations at Bonitas medical fund, has explained the similarities between the Covid-19 and flu ...
News
3 months ago

It's confirmed, exercise does reduce your chance of dying from Covid-19

The findings were that physical activity was associated with fewer hospitalisations.
News
3 months ago

A new study has revealed that many hand sanitiser brands sold in Johannesburg in the early stages of the Covid-19 pandemic contained traces of toxic ...
News
3 months ago