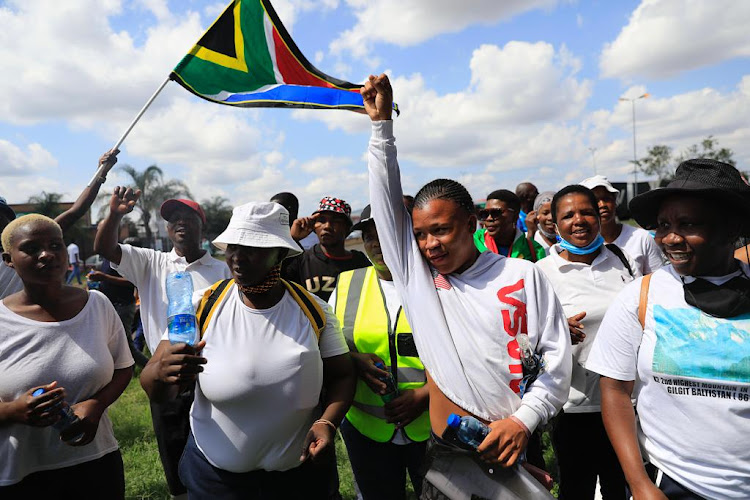 Members of Operation Dudula on a march to hand over a memorandum of demands against the employment of 'illegal foreigners' in Tshwane.
Image: Alon Skuy

Operation Dudula has long held that it is neither a xenophobic nor a violent movement and that it is being misrepresented by the media and certain politicians.

Operation Dudula again formed a major feature of SA’s news cycles after a death in Pimville, Soweto, on Monday.

A group of people, allegedly South African residents of Pimville and Operation Dudula members from the community, marched on Monday to protest against continuous power outages due to cable theft. The group alleged they could trace the theft to a group of undocumented foreign nationals who live in the area. During a march to confront the foreigners, Kgomotso Vincent Diale, a father of two, died in circumstances which are under police investigation.

Following Diale’s death, Operation Dudula leader Nhlanhla “Lux” Dlamini addressed residents, reiterating that the organisation and the people are not vigilantes and have been misbranded by media houses.

In an attempt to allow Operation Dudula to clarify its mission, aims and purpose, TimesLIVE allowed national executive member and representative Nango Enoch to outline its intentions and debunk misconceptions spread by the media.

* Please note that the views in this piece do not necessarily reflect the organisation or creators of this work.

48 hours or else, warns Lux-led crowd as Cele calls for order in Soweto

Expert cautions that Operation Dudula resembles Pagad, a vigilante group that became a law unto itself
News
2 months ago

TimesLIVE video takes a look at the circumstances surrounding the recent violence against illegal foreign nationals and what home affairs minister ...
News
2 months ago

One person died and another was wounded during a clash on Monday between Operation Dudula members and residents of an informal settlement in ...
News
2 months ago