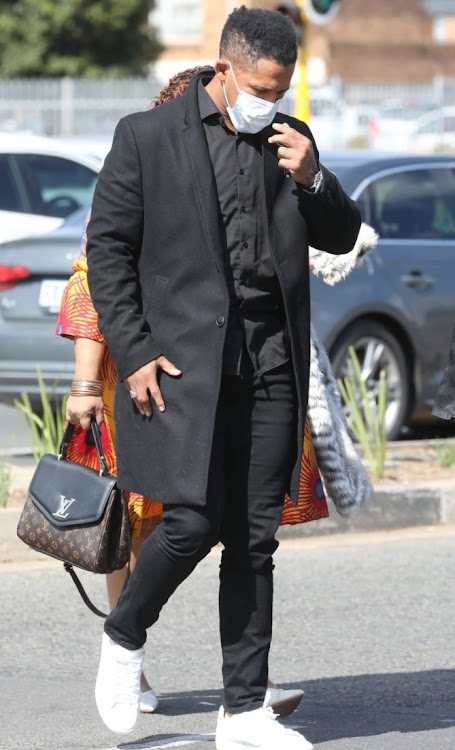 Elton Jantjies makes his way to the Kempton Park magistrate's court after he was temporarily detained by Gauteng police on Sunday on a malicious damage to property charge.
Image: Antonio Muchave/Sowetan

Springbok flyhalf Elton Jantjies’ malicious damage to property case was on Monday postponed until next month for further investigation.

Jantjies, 31, appeared briefly in the Kempton Park magistrate’s court after being arrested at OR Tambo International Airport in Johannesburg on Sunday.

He was detained for allegedly deliberately breaking airline property on a flight from Dubai to Johannesburg while returning from a family holiday in Turkey. He was released on R1,000 bail after being detained for a few hours on Sunday.

Wearing a black coat and accompanied by his mother, Jantjies was also flanked by bodyguards as he made his way into court on Monday.

His lawyer Nabeela Moola had earlier opposed an application by the media for permission to record court proceedings, arguing this would prejudice Jantjies by tarnishing his image and could lead to him losing his job as an international professional athlete.

Moola said the media had published untrue articles speculating on why his client was arrested, with some suggesting it was for a gender-based violence case.

The court ruled in favour of the media.

Jantjies arrived at court just after 9am and remained seated in a vehicle parked across the road from the building while waiting for his docket to be processed.

He did not speak to the media when he left court.

Moola, who walked Jantjies and his mother to a car outside court, kept saying: “No comment. We have no comment at this stage.”

Springbok flyhalf Elton Jantjies was temporarily detained by Gauteng police on Sunday on a malicious damage to property charge.
News
1 month ago

Airlines are spending as much as R1.5m on each flight to divert their aircraft for refuelling in Durban and Airports Company SA is refusing to ...
Business Times
1 month ago

SA's four United Rugby Championship (URC) franchises have differing views on the salary cap they are supposed to uphold but a divide between the ...
Sport
1 month ago