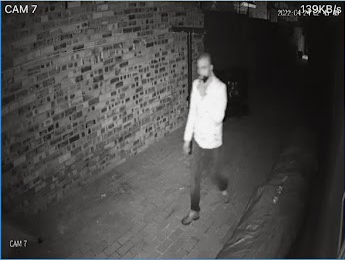 Security camera footage captured this image of the suspect believed to be linked to arson incidents in Joburg's northern suburbs.
Image: Supplied

Elderly Houghton resident Risto Andjelopolj died in hospital after he was assaulted and locked inside his home before it was set alight last month.

Andre Snyman of eBlockwatch told TimesLIVE on Thursday the man’s son had confirmed his father had died on Sunday.

Earlier this month Jovan Andjelopolj told the Sunday Times his father was on a ventilator and could not speak.

Sadly the old man who was saved from his burning home by the security guard below,passed away due to his injuries🥲

Posted by Andre Snyman eblockwatch on Tuesday, May 24, 2022

The alleged arsonist, who has been terrorising homeowners in Joburg's wealthy northern suburbs, is still on the loose.

“This death might have been prevented if the community and the police forewarned the residents that there was a trend. They were more concerned about an arrest than prevention,” said Snyman.

Police have confirmed they are analysing a string of arson attacks on luxury homes in Joburg’s most expensive suburbs.
News
3 months ago

'Catch Joburg arsonist or someone will die,' police told