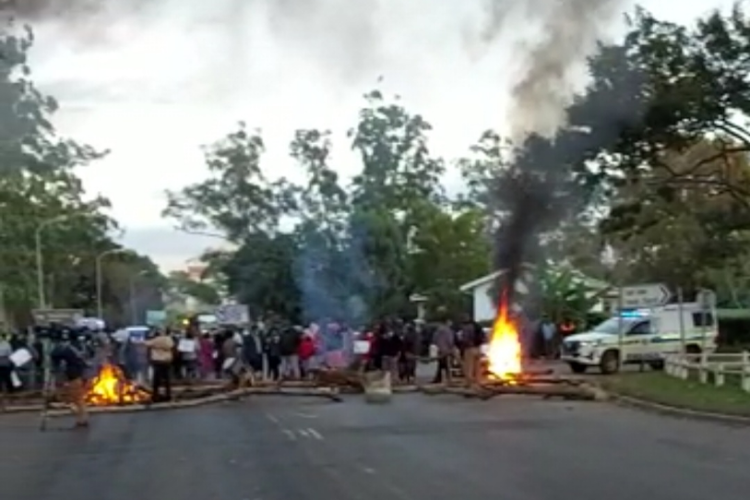 A screenshot from a video showing hundreds of irate community members in Tongaat protesting on Monday morning about not having water for 50 days after the April floods.
Image: Screenshot

Hundreds of irate residents in  Tongaat, north of Durban, took to the streets on Monday morning to protest over still not having water almost two months after the deadly floods in April.

A group of people blockaded Watson Highway Road in Tongaat with burning tyres and stones as they vented their frustration about being left high and dry for weeks.

Grandmother Zarina Khan, 50, said they had been failed by the government.

“We don’t have drinking water for 50 days. The water tankers come and fill people’s JoJo tanks, but there are only so many people they can service. We are relying heavily on donations from businesses and NGOs but even they are feeling the pinch.”

On Saturday the eThekwini municipality said the construction of an emergency water supply pipeline from Nyaninga reservoir to Tongaat south reservoir had been completed.

Municipal spokesperson Msawakhe Mayisela said as a result, access to intermittent piped water was made available to some areas in Tongaat.

He said procurement processes to start rebuilding the plant had been finalised and work would start as soon as a contractor was appointed.

“In the interim, the municipality continues to supply water through tankers and 48 static tanks. There are also boreholes and a donated package plant which supplies non-drinking water.”

Police spokesperson Lt-Col Nqobile Gwala said no damage or injuries were reported and police were monitoring the situation.

A woman was seriously injured when she was hit by a car while collecting water from a roadside JoJo tank in flood-hit La Mercy on the KwaZulu-Natal ...
News
2 months ago

A statement about a City Power substation being on fire and affecting water supply is fake, Johannesburg's water utility announced on Sunday.
News
2 months ago

Residents in Tongaat, north of Durban, are planning to take the streets on Thursday in protest against not having a water supply for more than 20 ...
News
3 months ago