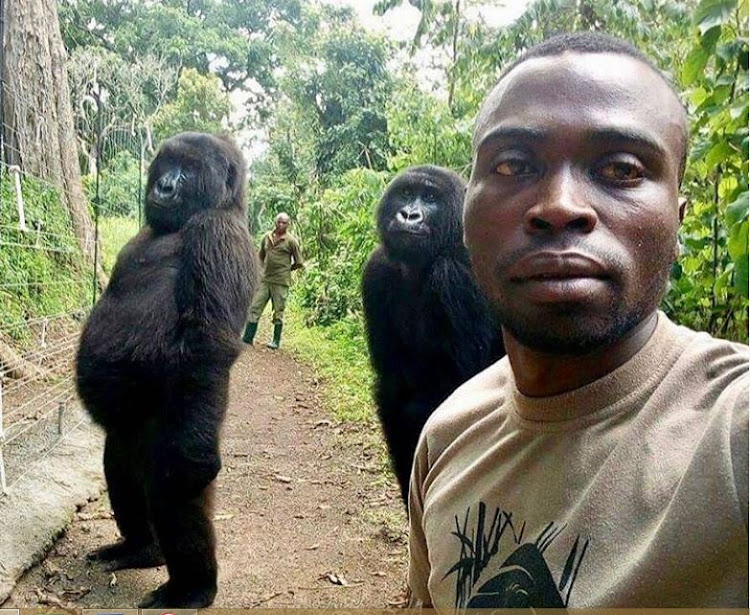 A picture of a Congolese park ranger posing with two standing gorillas has gone viral.

The selfie, which features caretakers Mathieu and Patrick with two female gorillas named Ndakazi and Ndeze, was taken at the Virunga National Park in eastern DRC.

The national park took to its Instagram page to clarify speculation about whether the standing gorillas are real.

"YES its real. Those gorillas gals are always acting cheeky so this was the perfect shot of their true personalities", Virunga National Park posted.

You might have recently seen caretakers Mathieu and Patrick’s amazing selfie with female orphaned gorillas Ndakazi and Ndeze inside the Senkwekwe center at Virunga National Park. We’ve received dozens of messages about the photo. YES, it’s real! Those gorilla gals are always acting cheeky so this was the perfect shot of their true personalities! Also, it’s no surprise to see these girls on their two feet either—most primates are comfortable walking upright (bipedalism) for short bursts of time. Guys, if you shared our gorilla selfie post, please share our Earth Day posts as well! Conserving Virunga’s amazing wildlife is a constant challenge for the Park and our work wouldn’t be possible without your support. Matching funds have been pledged on every donation to the Park today, up to a total of $25,000—giving us the opportunity to raise $50,000 for Virunga! Visit virunga.org/donate or click the link in our bio to get involved and keep sharing our posts! Thank you! *We want to emphasize that these gorillas are in an enclosed sanctuary for orphans to which they have lived since infancy. The caretakers at Senkwekwe take great care to not put the health of the gorillas in danger. These are exceptional circumstances in which the photo was taken. It is never permitted to approach a gorilla in the wild. #gorillaselfie #gorilla #mountaingorilla #mountaingorillaselfie #selfie #earthday #earthday2019 #virunga #virunganationalpark #congo #drcongo #rdc #drc #protecttheplanet #happyearthday #wildlife #wildlifeconservation #conservation #natureconservation

Innocent Mburanumwe, the deputy director of the national park, told the BBC that the two gorillas were taken in as orphans after their mothers died in 2007.

Mburanumwe said Ndakazi and Ndeze imitate their caregivers, hence they have learnt to stand on their feet - and to pose for a selfie.

WATCH | How African gorillas grieved when their mother died

Mountain gorillas groom their dead and even try to suckle from them, according to new research from the central African highlands.
News
2 years ago

Giraffes have been declared as critically endangered in Kenya.
News
2 years ago