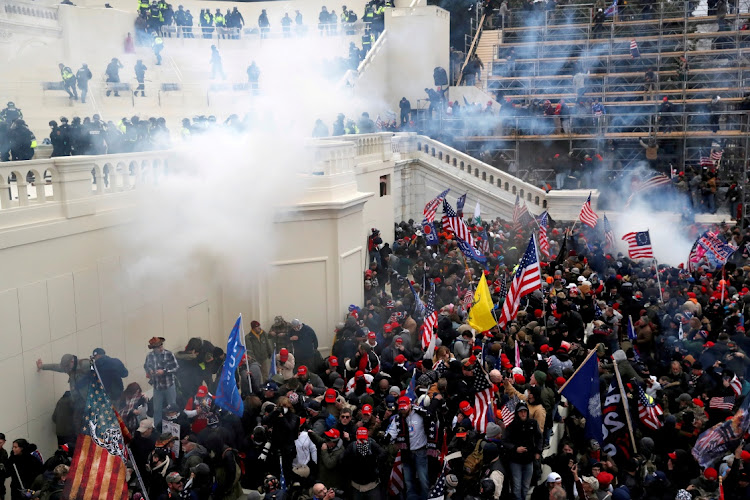 Police release tear gas into a crowd of pro-Trump protesters during clashes at a rally to contest the certification of the 2020 US presidential election results by the U.S. Congress, at the US Capitol Building in Washington, US, January 6, 2021.
Image: REUTERS/Shannon Stapleton/File Photo

US authorities have confiscated roughly $90,000 from a Utah man who sold footage of a woman being fatally shot during the January 6 attack on the US Capitol by supporters of former President Donald Trump, according to court filings.

Prosecutors also have filed additional criminal charges against the man, John Earle Sullivan, a self-described political activist who is accused of entering the Capitol building and participating in the riot, the filings unsealed on Thursday showed.

Sullivan now faces a total of eight criminal counts, including weapons charges, related to the riot. Sullivan's lawyer did not immediately respond to a request for comment.

Prosecutors have charged more than 440 people in connection with the attack in which Trump supporters stormed the Capitol after he gave a speech to them repeating his false claim that the 2020 presidential election was stolen from him through widespread voting fraud. The mob smashed windows, fought police and sent lawmakers into hiding. Five people died.

Many participants, including Sullivan, posted their actions on social media.

According to the court filings, Sullivan portrayed himself as an independent journalist who was reporting on the chaos, but actually encouraged other participants to “burn” the building and engage in violence.

Sullivan recorded video of the confrontation between rioters and police just outside the US House of Representatives chamber that included the shooting of protester Ashli Babbitt and, according to court filings, boasted to an unnamed witness that “my footage is worth like a million of dollars, millions of dollars.”

Sullivan sold that footage to several news outlets for a total of $90,000, according to a seizure warrant. The news outlets were redacted from the warrant.

In this time of crisis, the world must turn to spirit of common humanity

Twitter Inc suspended several accounts this week that were set up to share statements from a new part of former US President Donald Trump's website, ...
News
8 months ago

Facebook has six months to determine if Trump returns

Facebook Inc's oversight board on Wednesday upheld the company's suspension of former US President Donald Trump but said the company was wrong to ...
News
8 months ago

The US Senate Judiciary Committee chair is pressing the Federal Bureau of Investigation to explain how it failed to anticipate the violence of Jan. ...
News
8 months ago