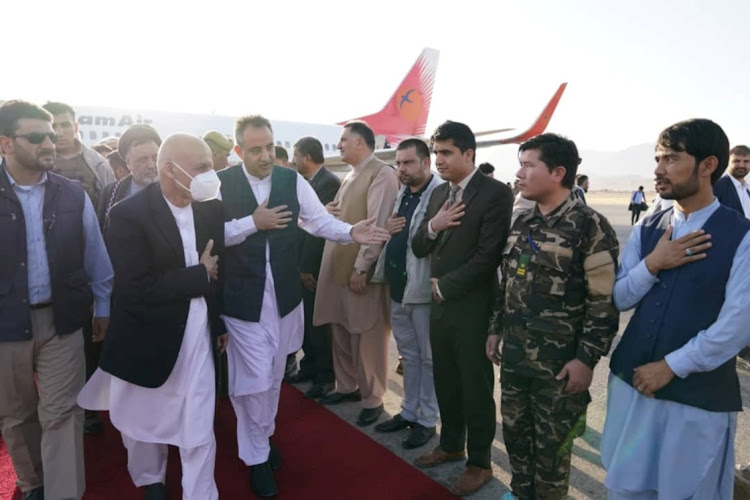 Afghanistan's President Ashraf Ghani held urgent talks with local leaders and international partners on Saturday as Taliban rebels pushed closer to Kabul, capturing a town south of the capital that is one of the gateways to the city.

The US and other countries rushed in troops to help evacuate their embassies after the militants captured town after town as US and other foreign forces who have backed the government withdrew. Many Afghans have fled to Kabul, driven out by fighting and fearful of a return to hardline Islamist rule.

“As your president, my focus is on preventing further instability, violence, and displacement of my people,” Ghani said in a brief televised address, adding that he was consulting government, elders, politicians and international leaders.

He gave no sign of responding to a Taliban demand that he resign for any talks on a ceasefire and a political settlement, saying his priority remained the consolidation of the country's security and defence forces.

“Serious measures are being taken in this regard,” he said, without elaborating.

He spoke soon after the insurgents, facing little resistance, took Pul-e-Alam, capital of Logar province and 70km (40 miles) south of Kabul, according to a local provincial council member, who spoke to Reuters on condition of anonymity.

The gain of the city, a staging post for a potential assault on Kabul, comes a day after the insurgents took the country's second- and third-biggest cities. The Taliban says it is close to capturing Maidan Shahr, another town close to Kabul on the main highway to the southern hub of Kandahar.

Afghan President Ashraf Ghani said on Saturday he was consulting with local leaders and international partners on the situation in the country, as ...
News
9 months ago

Western embassies and aid agencies began evacuating civilian staff from Afghanistan on Friday after the Taliban claimed to have captured two of its ...
News
9 months ago

American troops have begun flying in to Kabul to help in the evacuation of embassy personnel and other civilians, a US official said on condition of anonymity.

The Pentagon has said two battalions of Marines and an infantry battalion will arrive in Kabul by Sunday evening, involving about 3,000 troops. An infantry brigade combat team will move to Kuwait to act as a quick reaction force for security in Kabul if needed.

Britain and several other Western nations are also sending troops as resistance from Afghan government forces crumbles and fears grow that an assault on Kabul could be just days away.

Italy will evacuate its embassy in Kabul if necessary, Foreign Minister Luigi Di Maio said in a newspaper interview published on Saturday.

An Afghan government official confirmed on Friday that Kandahar, the biggest city in the south, was under Taliban control as US-led international forces complete their withdrawal after 20 years of war.

Herat in the west, near the border with Iran, also fell to the group.

Kandahar's loss was a heavy blow to the government. It is the heartland of the Taliban  fighters who emerged in 1994 amid the chaos of civil war — and is close to the town of Spin Boldak, one of the two main entry points into Pakistan and a major source of tax revenues.

A US defence official said before the fall of Pul-e-Alam that there was concern that the Taliban — ousted from power in 2001 after the Sept. 11 attacks on the US — could make a move on Kabul within days.

“Kabul is not right now in an imminent threat environment, but clearly ... if you just look at what the Taliban has been doing, you can see that they are trying to isolate Kabul,” Pentagon spokesperson John Kirby said.

Some embassies have begun to burn sensitive material ahead of evacuating, diplomats said.

The US embassy in the Afghan capital informed staff that burn bins and an incinerator were available to destroy material including papers and electronic devices to “reduce the amount of sensitive material on the property,” according to an advisory seen by Reuters.

United Nations Secretary-General Antonio Guterres warned that “Afghanistan is spinning out of control” and urged all parties to do more to protect civilians.

Many people in the capital were stocking up on rice and other food as well as first aid, residents said. Visa applications at embassies were running in the tens of thousands, officials said, and Washington was asking countries to temporarily house Afghans who worked for the US government.

The explosion in fighting has raised fears of a refugee crisis and a rollback of gains in human rights, especially for women. Some 400,000 civilians have been forced from their homes this year, 250,000 of them since May, a UN official said.

Canada said it would resettle more than 20,000 vulnerable Afghans said%20on%20Friday including women leaders, human rights workers and reporters to protect them from Taliban reprisals.

Of Afghanistan's major cities, the government still holds Mazar-i-Sharif in the north and Jalalabad, near the Pakistani border in the east, in addition to Kabul.

The speed of the Taliban's gains has led to recriminations over the US withdrawal, which was negotiated last year under the administration of President Joe Biden's Republican predecessor, Donald Trump.

Biden said this week he did not regret his decision to follow through with the withdrawal. He noted Washington has spent more than $1 trillion and lost thousands of troops over two decades, and called on Afghanistan's army and leaders to step up.

Opinion polls showed most Americans back Biden's decision, but Republicans criticised the Democratic president's handling of the US withdrawal.

Iran is to impose a one-week lockdown and a ban on road travel amid a fifth Covid-19 surge in the worst-hit country in the Middle East, state ...
News
9 months ago

Taliban fighters could isolate Afghanistan's capital in 30 days and possibly take it over within 90, a US defence official cited US intelligence as ...
News
9 months ago