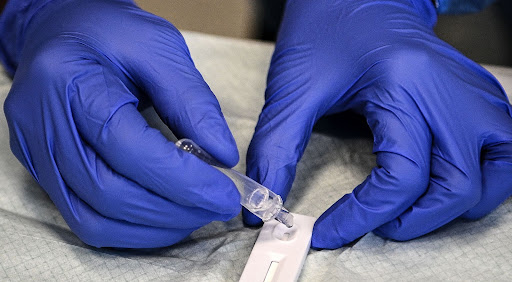 Bottlenecks in the system could become a bigger problem as the outbreak expands.
Image: Bloomberg

US testing for monkeypox is insufficient to determine how widespread the virus is and where new cases are cropping up, according to infectious disease experts and advocates concerned about a sluggish response to the outbreak that’s already hit 32 countries.

While government labs have the capacity to test as many as 8,000 samples a week, they’re only using 2% of that capability, suggesting that about 23 monkeypox tests are being performed a day, said James Krellenstein, the cofounder of PrEP4All, an HIV advocacy group that widened its focus during the pandemic. Much more testing is needed to find out where the pathogen is and how fast it’s moving, he said.

Normally seen in African countries where most human cases are caused by spillover from infected animals, monkeypox has been spreading through close contact, mainly among men who have sex with men. Though it doesn’t move as quickly as Covid-19, more than 1,600 cases have been reported globally since health officials began tracking it last month, including 72 in the US as of Tuesday. The situation echoes the early days of Covid-19, when flawed tests from the Centres for Disease Control and Prevention allowed the pandemic to spread undetected in the US, Krellenstein said.

“It’s concerning that the CDC isn’t pushing for this themselves, especially after Covid-19,” he said in an interview. “This is a critical period: Outbreaks become harder to control as time goes on.”

Monkeypox is diagnosed at designated public health laboratories with a type of Food and Drug Administration-approved molecular test, called PCR, that recognises viral genetic material. Currently, all tests run through the government’s lab network, which experts say is cumbersome, leading to potential delays in identifying new cases and a risk of missing wider community spread.

Testing is so limited that it’s impossible to tell how much of the virus circulating in the US is being picked up, said Ranu Dhillon, an infectious disease doctor at Harvard Medical School and Brigham and Women’s Hospital in Boston. It could be 90% or just 10%, he said.

“This challenge of expanding and decentralising testing in response to an outbreak with widespread, unknown transmission chains is not new,” Dhillon said. “It’s been a common theme in multiple recent outbreaks,” including Ebola, Zika virus and, of course, Covid-19.

Experts urged decentralising testing and supporting an expansion to labs and hospitals capable of performing PCR tests, especially in places like sexual health clinics where many monkeypox patients are showing up.

“We absolutely need to ensure that every hospital with a laboratory — a molecular virology laboratory — should be able to test their patients for monkeypox,” said Michael Mina, a former Harvard epidemiologist who is now chief science officer for eMed, which sells at-home Covid-19 tests.

Raj Panjabi, the White House’s senior director for global health security and biodefense, said Friday that more than 300 PCR tests for monkeypox had been performed and there’s been a 45% week-to-week increase. The CDC said that, as of Monday, 556 specimens have been tested.

US health officials say they’re working to expand testing to companies and other government laboratories. The CDC has published online instructions for making primers — DNA sequences used in PCR tests — so labs can start creating their own monkeypox assays.

“We’ve posted guidance on our website with our assay information that anybody could replicate if they wanted to develop their own test,” said Jennifer McQuiston, deputy director of the CDC’s Division of High Consequence Pathogens and Pathology. “We also know that some people want to just lift the CDC assay and install it in a commercial lab and we’re exploring ways to help them do that.”

On Friday, the Association of Public Health Laboratories said that, should the outbreak continue to grow, it supports a “phased expansion” of monkeypox testing in the US. The FDA says it’s preparing to make a molecular emergency use authorisation template available in case the outbreak is declared a public health emergency.

Testing giant Labcorp said it’s “evaluating all available options to support increased monkeypox testing,” including partnerships with the CDC, other governmental entities, and groups such as the American Clinical Laboratory Association. Quest Diagnostics Inc. said it isn’t offering a monkeypox test but is exploring options.

Bottlenecks in the system could become a bigger problem as the outbreak expands. High demand can create delays in testing turnaround time at public health labs, said Bryon Backenson, the director of communicable diseases at the New York State department of health. A Washington-based doctor said on Twitter that it took him six hours to get a call through to his public health laboratory about one suspected monkeypox case.

“One thing we’ve learnt from Covid-19 is that availability of testing is very important,” Backenson said. “Having more labs and more people capable of testing is a good thing.”

US health agencies began planning for a smallpox outbreak after the September 11, 2001 attacks and anthrax spores sent through the mail raised concerns about bioterrorism. That’s helped buttress the health system against emerging diseases like monkeypox, but there are still important gaps that showed up in the early days of the pandemic.

Early Covid-19 control efforts were hurt by the faulty test kits and centralised US approach, along with regulatory hurdles. CDC’s tests may have missed one of the earliest US infections, leading to additional community exposure, experts have said. Few tests were being performed in February or March of 2020, though the virus was already spreading across the US at that time.

Other practices may limit the recognition of monkeypox’s spread. Most testing is currently reserved for people with a characteristic rash and who either are men who have sex with men or have recently travelled abroad, according to Paul Sax, an infectious diseases doctor at Harvard and Brigham and Women’s Hospital. Most of the people tested by New York’s health department have been men, Backenson said. Some people told PrEP4All that their own doctors had turned them away for monkeypox testing, Krellenstein said.

Monkeypox may also be confused with some sexually transmitted infections, such as herpes or syphilis, health officials said. Some patients in New York who might have had monkeypox weren’t tested for it because they were positive for other pathogens, Backenson said. The CDC warned doctors this week that patients with rashes typically characteristic of other infections should be carefully evaluated for monkeypox, and that confections are possible.

Restrictive testing could create blind spots as the virus spreads to other populations. The focus on men could lead to missed infections in women or children, Harvard’s Dhillon said. The US should be over-testing for monkeypox to ensure the full scope of the outbreak is known, he said.