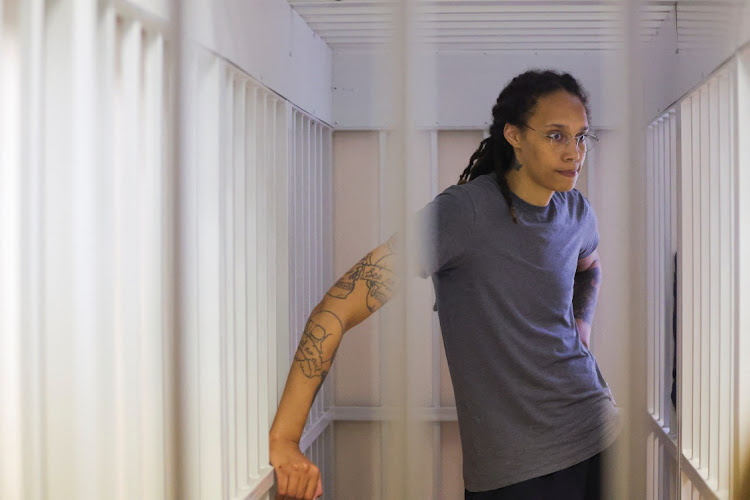 US basketball player Brittney Griner, who was detained at Moscow's Sheremetyevo airport and later charged with illegal possession of cannabis, stands inside a defendants' cage before the verdict in a court hearing in Khimki outside Moscow, Russia, on August 4 2022.
Image: REUTERS/Evgenia Novozhenina/Pool

A Russian court on Thursday sentenced US basketball star Brittney Griner to nine years prison on drugs charges, after finding her guilty of narcotics possession and smuggling for bringing cannabis-infused vape cartridges into Russia.

A Russian state prosecutor had requested 9.5 years in prison for Griner, who said in her closing remarks that bringing the cartridges into Russia had been "an honest mistake"

After the sentencing, Griner appeared sad and stony-faced, and said she understood the sentence.

US basketball star Brittney Griner says bringing cannabis into Russia was "an honest mistake" after a Moscow court found her guilty of drugs charges.
News
2 weeks ago

Families of Americans held abroad team up to pressure Biden

Families of US citizens detained abroad are stepping up pressure on President Joe Biden to intervene to try to free them - some held by adversaries ...
News
1 month ago

Russia has accused the US of direct involvement in the Ukraine war, while the first ship carrying Ukrainian grain to world markets since Moscow's ...
News
2 weeks ago